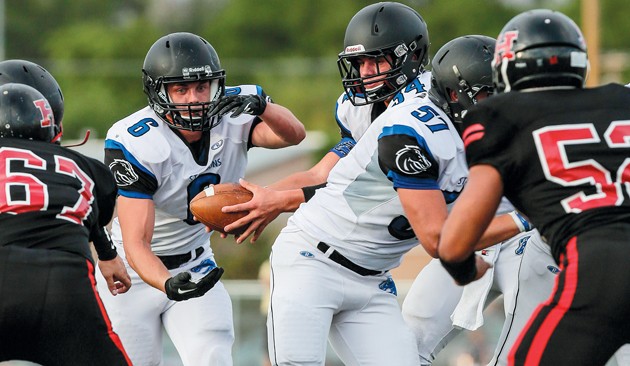 Stansbury quarterback Gage Mazione hands the ball off to fullback Josh Griffith in Friday’s away game against Hurricane. Stansbury didn’t fare well on the road, losing 28-7 to the Tigers.

The Hurricane Tigers defeated the Stansbury Stallions on Friday, 28–7, during Stansbury’s visit to southern Utah.

The Tigers took a 14–0 lead at halftime and extended on it during the second half. Stansbury’s lone score came with just under three minutes remaining in the game on a 47-yard touchdown run by Casey Roberts. He broke through the interior of Hurricane’s defense and had no defensive backs behind to stop him.

Hurricane struck in the first quarter on a bizarre play where the Stansbury defense tipped a Hurricane pass into the air, but the ball landed in the arms of Hurricane receiver Nick McDaniel, who sprinted down the sideline for an 83-yard touchdown.

Hurricane’s Jeremiah Ieremia scored the next three touchdowns. The first came on a drive where Ieremia had runs of 11 and 28 yards. He capped the drive with a point-blank strike at the 1-yard line for the two-touchdown lead.

Stansbury’s Gage Manzione then threw a pass that hit his receiver in the hands, but the ball popped into the air. Hurricane’s Noah Elison leapt in and picked it off to set the Tigers up inside the Stallions’ 20-yard line. Ieremia pounded in a run from 10 yards out to make the score 21–0.

Finally, Hurricane scored with 4:55 left in the game — just before Stansbury broke the shutout — with Ieremia breaking through on a 15-yard run.

“They’re a great program, and we have a ton of respect for them,” Pearson said. “They’ve done a lot of great things. Our boys came in and were excited to get to play against the number two team in the state.”

Ieremia said he and the Tigers tried not to focus too much on the fact that Stansbury was ranked No. 2 going into the game, but it was hard to push it out of their minds. He said it was a big win because they consider Stansbury to be the top class of talent in the state.

The Stallions return home Friday for a game against Springville. They lost to the Red Devils on Sept. 6, 2013, 27–14. Manzione made his first start at quarterback in that game. The Stallions and Red Devils went into halftime tied at 7, but then the Red Devils grabbed the lead in the third quarter. They then tacked on an insurance touchdown in the fourth quarter.

The Stallions have not lost consecutive games since they moved to 3A in 2011.

Richard Briggs is a sports reporter for The Spectrum & Daily News in St. George.