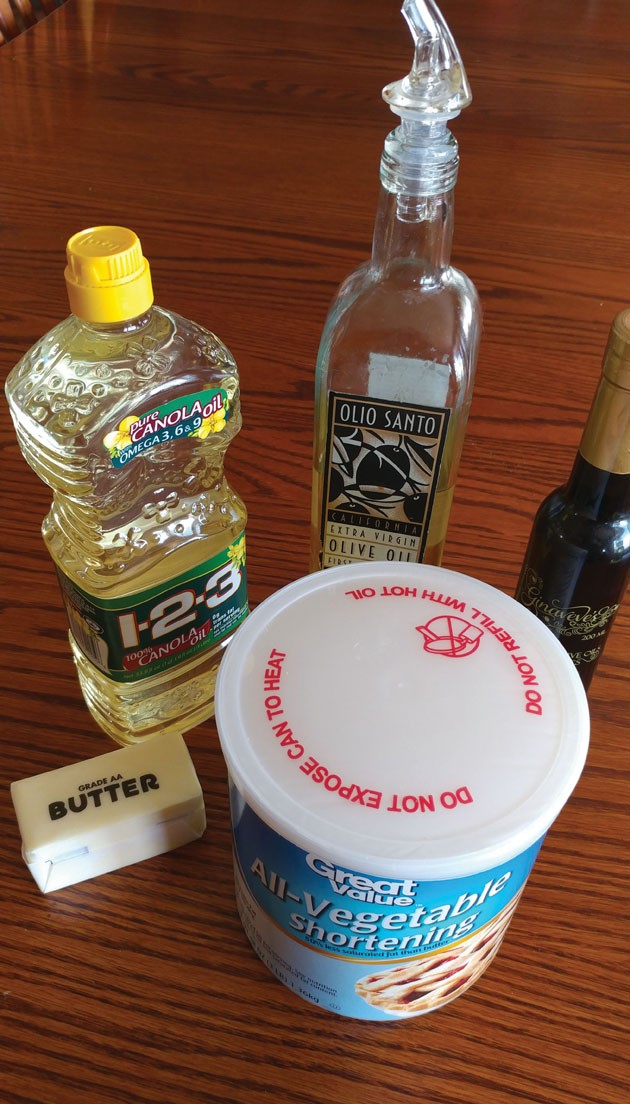 Both recent and centuries-old types of oils are found in most kitchens today.

September 21, 2017
If someone tells you they’re growing canola, just smile

It was confusing to me as a kid. How could there be so many types of oil?

I remember the “3-in-1” oil that was used to lubricate the chain on my bike or the ball bearings on my skate board. I also knew oil was used in the engine of the car and the lawnmower. I was also certain they didn’t taste good, and I was right (don’t ask me how I know).

Throw in shortening, lard and fats, and it’s enough to put a young mind into overload. It wasn’t until later that I understood that these types of substances come from plants, animals and from the earth. Each of these categories are a huge subject on their own, so we’ll focus on one: plant-based oils that are used for cooking.

We commonly call them vegetable oils. But the term is a bit confusing. From which vegetables are these oils produced? None really — we’re just talking about plants and the nuts and seeds they produce. Edible oils are divided into animal and vegetable. Notice petroleum oils are not classified as an edible oil, as confirmed by my youthful taste test. Vegetable oils are liquid at room temperature. Yes, olive oil is classified as a vegetable oil, too.

Most vegetable or cooking oils are a relatively recent invention, coming into common use in the early 1900s. Until then, the oils used both for cooking, baking and frying came from animal fats, butter, and in some regions of the world, olive or coconut oils.

There is also some conjecture that grape-seed oil has been used both for some culinary uses as well as a lamp fuel in centuries past. Since wine making has a long history, and grape-seed oil is a natural by-product of pressing grapes, it’s likely that oil from grape seeds was put to use.

This is an interesting thought as well: that plant or animal based fats and oils can be used as a fuel as well as a meal component. Olive oil has been used as a lamp fuel for millennia. Candles were made from animal fat. Even beeswax is an effective and aromatic fuel source for candle making, but that is a subject for another time.

The oils we are most familiar with that we use in the kitchen are olive, palm, canola, soybean and safflower. Since many times these specific names (other than olive) aren’t that palatable to the consumer’s mind, the more generic term, “vegetable” oil is used.

Not too many weeks ago, this paper featured an article on the safflower fields that were ablaze in yellow along state Route 36 near Erda Way. Since we have some local association with safflower, let’s begin with it. Safflower plants have been cultivated for many centuries, being well adapted to arid climates. They grow a deep tap root that gives them drought hardiness. This also has the benefit of being a less thirsty crop, aerating the soil, and keeping organic material in the soil as the top is harvested later.

The plant is an annual, and is somewhat thistle-like, with multiple flower heads. The seeds in the flowers contain oil that is pressed out. While the field in bloom is a beautiful sight, those who raise this crop say walking through it is difficult as the plants and blooms cling to you. In fact, some farmers use it as a deterrent of pests and animals by encircling or banding along other crops.

Refined safflower oil is colorless and almost tasteless. This allows it to be used in foods to provide fat, moisture and texture, while not competing with desired tastes of the dish. It’s also used in the cosmetic and paint industries.

Another well-known type of cooking oil is canola. If someone tells you that they’ve seen or raised some canola plants, they are misinformed. There is no such plant. Canola oil is made from rapeseed oil. It’s been around for a long time, and there have been problems associated with some of the ancient and historical types of rapeseed. The seeds are from the rape plant, a member of the brassica family. We edible gardeners recognize other brassicas such as cabbage, mustard greens, and Brussels sprouts.

Rapeseed accounts for about one-third of the cooking oil production in the world. Where did the term “canola” come from? As undesirable characteristics of the oil were bred out over time, it was time for a rebranding. The Canadian seed oil industry renamed the product “canola” (loosely based on “Canadian oil”) in 1978. This likely accomplished the dual goal of distancing this new product from the old problematic rapeseed oil, as well as not using the word “rape” itself — not a desirable term. We haven’t had canola oil on our grocery store shelves for that long. It first showed up in America in 1986.

Production of canola oil is somewhat complex, going far beyond simply pressing oil out of the seed. The basic process consists of separating the seed, then slightly heating and crushing it. The vast majority of commercial canola oil is then extracted using a hexane solvent. This solvent is recovered at the end of the process. Final processing consists of using water and organic acid to remove gumminess and fatty acids. The oil is then filtered and steam distilled to deodorize it. The process for soybean oil production is somewhat similar.

Both soybean and canola oil are key elements of the bio-diesel industry and supply chain, and there are food-safe inks that are produced using soy oil. The next time you sit down at a fast food restaurant with a food tray liner under your order, you can be sure that it’s printed with a soy-based ink.

There are some who feel the use of oils or fats in the diet is to be avoided at all costs. But the preponderance of scientific research right now doesn’t support that approach. While it’s true that oils and fats are typically calorie-dense, they do serve important functions in the diet of humans and wildlife. Those of you who are bird lovers know the importance of seed mixes and suet over the winter for our feathered friends. It’s not just a snack to them; the calories allow the birds to generate sufficient body heat to overwinter successfully.

Fats and oils also serve important function in our diet, with our own tissues containing and generating these substances. That being said, there are some that are better for you than others, and moderation is key. Palm oil is high in saturated fats, and is a common food item ingredient that should be monitored to assure that it is not a heavy part of one’s diet.

Another controversial subject is hydrogenated oils. Any edible oil can be hydrogenated — transformed from a liquid state at room temperature to a spreadable solid, like margarine, vegetable shortenings and Crisco.

As the name implies, hydrogenation is using hydrogen to modify, or transform, the molecular structure of the oil so that it is longer and therefore solid. These are trans-fats, and there is significant debate on the impacts on our health. They tend to be found in things where extended shelf life is the goal. Packaged baked goods, cookies and snacks are good examples of items that typically contain hydrogenated oils — not exactly the bastions of healthy eating.

No wonder olive oil is enjoying a major wave of popularity. It even has a cute acronym, EVOO, to go along with the most desirable form of this oil: extra-virgin olive oil. It has a taste that goes well with many dishes, and is simply processed and filtered. The “virgin” terminology means the oil was derived by simple pressing without any industrial processes. Extra virgin is the most desirable, and lower grades of olive oil are sometimes labeled as “pure” or “light” or just called “olive oil.”

With that, I’m going to make a batch of marinara, and you can be sure I’ll reach for a bottle of EVOO as preparations unfold.