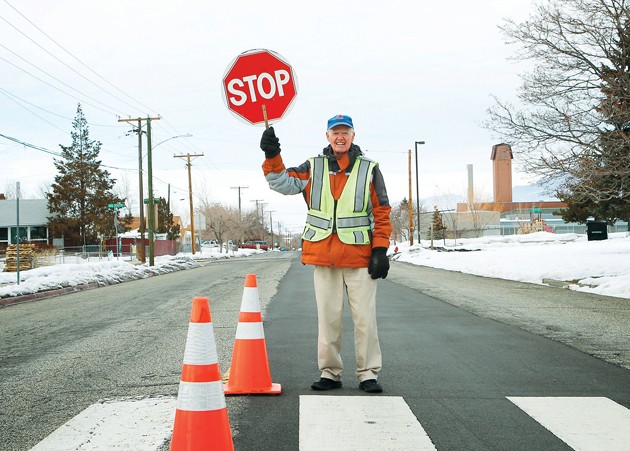 Jack Chamberlain holds a stop sign at his crosswalk near East Elementary on Feb. 28.

If you ever ask East Elementary School crossing guard Jack Chamberlain to talk about himself, you’ll find him eagerly changing the subject at the first chance he gets.

He is more prone to discuss all the people he admires — East Elementary’s principal, his parents and his aunt. He’s ready at the drop of a hat to sing their praises. He conducts his conversations just as he does the rest of his life — in the service of others.

In 2009, after some serious health problems made it impossible to continue living in his home in Anaheim, Calif., on his retirement fund, Chamberlain, 86, moved to Tooele County and applied to be a crossing guard at East Elementary School.

“I was just barely recovering from an operation,” said Chamberlain. “My daughter, who lived in Salt Lake, asked if I could come down and live there and she’d help me.”

As a crossing guard, Chamberlain is only required to monitor the students crossing the streets before and after school. However, he stays at the school for most of the day. During the time he is at the school, Chamberlain makes it a point to go above and beyond his compensated duties.

“I don’t like to just watch things as they are,” Chamberlain said. “I’d like to improve them if I can.”

He spends hours each day not only fulfilling his crossing guard duties but also shoveling the snow on the sidewalks and street. He brings his own shovel to work each morning. According to Chamberlain, the days with no snow are a “paradise” and he spends his time attending to any other road maintenance issues he notices.

“To me the job hours mean nothing,” said Chamberlain. “If there’s something to do I’m going to get it done.”

Chamberlain’s life has been a long history of going the extra mile. According to him, it was a life-long lesson that he learned from his father, Philip Chamberlain.

“My dad was an amazing man,” he said. “He was always moving us around, willing to do whatever he could to provide for us kids. I had a lot of amazing experiences as a child.”

Chamberlain, who was born in Salt Lake City in 1926, lived there until 1933, when he and his family moved to Chicago. Over the next several years, they lived in New Jersey, California, New York and Ohio.

“After all of these experiences, I really learned to like people,” Chamberlain said. “I learned how to get along with them and make friends pretty easily, even if I was naturally shy. Sometimes my teachers would point out how bashful I was, but I tried to get over it after moving around so much.”

“I got used to working with people and helping them in one of the nicest companies to work for in southern California,” said Chamberlain.

He took that love for people and used it throughout his life. After retirement, just before getting the job as a crossing guard, he spent time working at Disneyland.

“I loved working there,” said Chamberlain. “It’s a wonderful atmosphere. Everything is for the benefit of the guests, just as it should be.”

He took that love for helping, love for people and especially love for children and brought it to his crossing guard duties. Chamberlain has made it a point to not only do extra work as far as snow shoveling and maintenance go, but by endearing himself to the students there.

“The kids are just like your own kids after a while,” said Chamberlain. “You watch them grow up each year and it’s an amazing experience.”

There have been many people who have noticed Chamberlain’s service extending above and beyond the expectation including teachers, parents and passers-by. Recently, some parents got together to purchase supplies to make his job easier.

“One of the part-time gals [at East Elementary] saw me working there and was like, ‘What’s with this guy? You’re out here working hard,’” said Chamberlain. “They gave me a beautiful coat and a gift certificate as well as some new shoes. They made me much more comfortable.”

The students at East Elementary have also noticed his increased efforts. Several of them consistently go out of their way to talk to him and thank him.

“I had one little girl who went out of her way to make me feel welcome,” he said. “She walked across the street to make sure she said hi to me.”

One student invited Chamberlain to come inside and eat lunch with the students. Because of his extensive work and extra hours, the principal made an exception to the rule — crossing guards are not generally encouraged to go inside the building, according to Chamberlain — and asked him to eat with them every day.

“It’s amazing to go into the lunchroom and see so many kids laughing and having a good time,” said Chamberlain. “I’ve always tried to do whatever I can for the kids.”

To Chamberlain, putting in several extra hours of manual labor will never be a big deal. To all of those who have the privilege of knowing him and watching what he does on a daily basis, he has become a shining example of good.

“During the winter, what are you going to do when you get the snow and the ice?” he said. “Instead of just standing there and freezing, I’d get warm. Shoveling keeps me warm.”