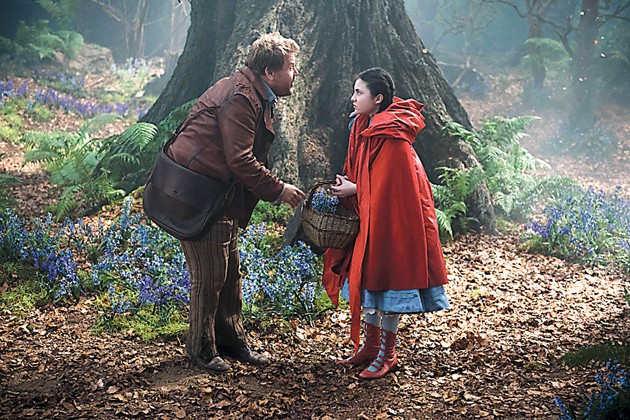 James Corden, as the baker, and Lilla Crawford, as Little Red Riding Hood, star in “Into the Woods,” a film adaptation of a musical adaptation of classic fairy tales that opens Christmas Day. image courtesy Disney Enterprises

What is it with studios releasing musical movies around Christmas?

Two years ago we had “Les Miserables,” and last week we had the culturally diverse remake of “Annie.” On Christmas Day this year comes “Into the Woods.”

Like the popular musical theater production upon which it is based, “Into the Woods” follows a series of well-known fairy tale characters as they pursue their respective wants and wishes. The baker (James Corden) and his wife (Emily Blunt) want a child but cannot bear one of their own — or, so they think. The witch (Meryl Streep) offers to lift a curse that has been preventing them from having children if they come back with a series of objects: a cow as white as milk, a cape as red as blood, hair as yellow as corn and a slipper as pure as gold.

As the title suggests, into the woods they go to find these various objects. The cow they find in the hands of Jack (Daniel Huttlestone), and convince him to sell it to them for a handful of beans they tell him are magic. They find Little Red Riding Hood (Lilla Crawford) with the cape matching the witch’s description, and the hair attached to Rapunzel (Mackenzie Mauzy) high in a tower, Cinderella’s (Anna Kendrick) magical wardrobe for the prince’s ball includes slippers as pure as gold. All that’s left to do for the couple is to gather them all up — easier said than done.

Meanwhile, Red Riding Hood’s trip to see her grandmother is diverted by a swarthy Wolf (Johnny Depp), and Cinderella finds herself indecisive about the affections of the Prince (Chris Pine). And Jack finds out the hard way that those “magic” beans he sold his beloved cow for are the real deal.

As long as you can get passed the fact that virtually every line is sung, there’s a lot to love about “Into the Woods.” The lush scenery brings the story — and the fairy tales most of us have heard ad nauseum since infancy — to life.

Crawford is perfect as the adorable but bratty Little Red Riding Hood, and Depp positively oozes wolfish charm during his brief (but heavily promoted) appearance. Cinderella is sweet and relatable, but her story is given pizzaz from her wicked stepmother and stepsisters (Christine Baranski, Tammy Blanchard and Lucy Punch).

Blunt and Corden, whose characters are unquestionably at the center of the story, give their on-screen relationship depth with subtle gestures and line delivery, and make their dogged pursuit of the witch’s quest seem reasonable. The one misstep in all of that is it makes a turn in the wife’s story late in the film seem a little implausible because of the marital strength displayed throughout.

The vocals are, without any derivation I noticed, anyway, pitch perfect through the whole two hours of this movie. Not every line may be sung with perfect clarity, but in those cases operatic quality is sacrificed for characterized tone, and it works.

Probably the most enjoyable number was the over-the-top “Agony” by the prince and his brother (Billy Magnussen), as they pine for Cinderella and Rapunzel, respectively. The other numbers were great and all, but I, and the rest of the audience, couldn’t help but giggle at their musically expressed heartache.

One note for parents with young children: This is based on fairy tales, but they’re closer to the Brothers Grimm version than Disney’s. The stepsisters cut off bits of their feet to fit into Cinderella’s slipper, and afterwards get their eyes pecked out by birds. Rapunzel’s prince is blinded by thorns. People die, and they stay dead. There’s nothing terribly graphic, especially not compared to most Hollywood fare, but this isn’t warm and fuzzy through and through.

Though, it is a little warmer and fuzzier than the play — some of the endings are a little happier than on stage, as well as a few other minor changes.

For me, the continuous string of music made the two hours seem a little on the long side, but if you don’t mind that, “Into the Woods” is a beautiful and well-done trip down a well-trod path.