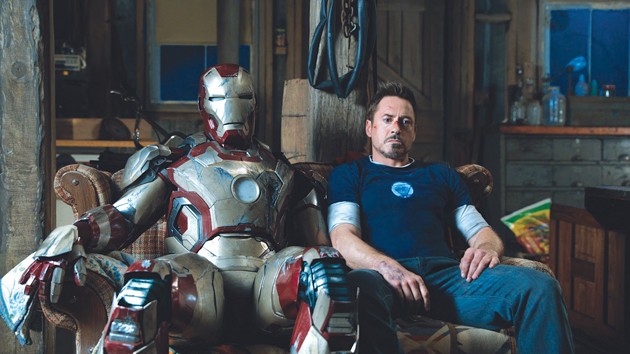 Tony Stark is back and he is awesome.

In his fourth time in the Iron Man suit, Robert Downey, Jr. maintains the showmanship and wit of the billionaire-turned-superhero while managing to give him a bit of humanity.

“Iron Man 3” takes place shortly after the events of “The Avengers,” and poor Tony is still dealing with the trauma that understandably comes with battling hoards of aliens and then almost getting trapped in space before plummeting thousands of feet down to Earth, which starts to wear on his relationship with Pepper Potts (Gwenyth Paltrow).

Tony and Pepper have bigger things to worry about, though. A terrorist calling himself The Mandarin (Ben Kingsley) has been setting off explosives in various military installations and landmarks, and after one explosion critically injures Tony’s former bodyguard, Happy (Jon Favreau, who opted out of directing this third “Iron Man”), Tony challenges the shadowy figure. The Mandarin responds by sending forces to blow up Tony’s oceanfront mansion, with Tony inside. Iron Man is presumed dead.

But instead of dead, Tony ends up in backwoods Tennessee with a malfunctioning suit and virtually no resources. Befriended by a local boy, Harley (Ty Simpkins), Tony slowly begins to fix his suit and piece together the hows and whys behind The Mandarin’s attacks. When Pepper is taken by The Mandarin, Tony must really MacGuyver it up to save her and stop a plan to kill the President of the United States. Oh, and work through his post-trauma anxiety. No biggie.

Tony Stark has perhaps more toys than any other superhero, including Batman, but here, stripped of his lab and his tools and even his computer for a good chunk of the movie and having to make due for most of the rest, he is at his best. Like in the first “Iron Man,” when he was forced to build the makeshift prototype in a cave, Tony Stark proves that his real superpower is his ingenuity. And that’s just fun to watch.

Even with its comparatively stripped down tech, “Iron Man 3” preserves the quips and slick action that sailed the first two movies to box office heights. The plot is still more involved than most, and occasionally still a little ridiculous, but isn’t nearly as exhausting as the storyline from “Iron Man 2,” thanks to “Lethal Weapon” screenwriter Shane Black, who co-wrote the screenplay with Drew Pearce besides taking over as director for Favreau.

Beyond the solid writing and direction, the performers hold their own. Kingsley is great as a cold, calculating terrorist who isn’t exactly what he seems. Downey Jr. manages to tease some depth from behind the ego without being melodramatic and again proves that he decisively owns this character. Guy Pearce, as brilliant but unstable scientist Aldrich Killian, and Rebecca Hall, as a genius botanist who’s found herself in too deep with the wrong people, are also good. Favreau’s character and Don Cheadle’s Col. James Rhodes were also nice to see again, although neither got quite enough screentime.

There are some seriously cool stunts here, too, including an improvised skydiving formation that I wished could have been rewound and played back another time or two. They don’t skimp on the explosions, either, but they’re all done in such a way that they seldom feel gratuitous (Michael Bay, take notes).

As with other recent Marvel releases, there’s another quick clip at the end to get you to stick around through the credits. It was rumored that this might tease an Ant-Man movie, which is not the case, but fans will find the miles and miles of credits worth it for the end clip.

There are a few places where it falters a bit — I couldn’t figure out why Tony couldn’t figure out his battle strategy wasn’t working, even though experience and logic would suggest he’d think up alternative approaches. Also, the whole thing takes place at Christmastime, but we’re in May now. The flaws are slight, though, and in all, “Iron Man 3” is big enough to set the bar high for summer releases but maintains some substance, too. It might just be the best so far.