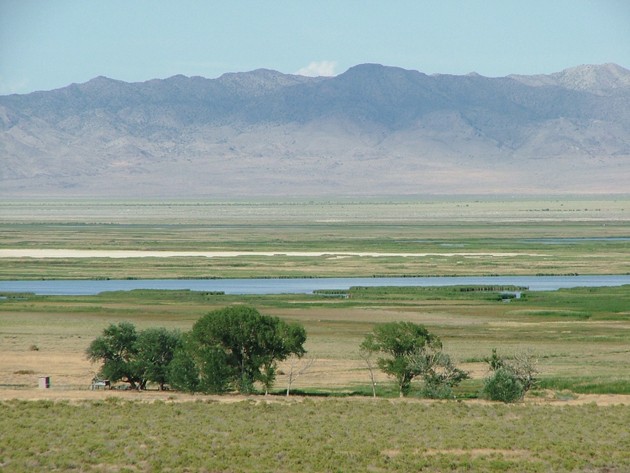 July 6, 2017
Is fantastic tale about a battle in the West Desert believable?

Editor’s note: This is another installment in a multi-part series on exploring the Pony Express Trail through Tooele County. Last week’s article continued a review of Fish Springs National Wildlife Refuge.

A mile or so beyond Fish Springs, you will come to one of the characteristic Pony Express Trail markers that was constructed by the Civilian Conservation Corps in the 1930s. Looking west from the marker, you can see a low pass that Pony Express riders would have followed over the Fish Springs Range while headed to Willow Springs. Due to the proximity of the springs and Deep Creek Mountains, the pass would have likely been a good spot for a potential ambush of a rider by either bandits or American Indians.

From the marker looking to the east, you have a fine view of the Thomas Ranch site and the rest of the greenery that is Fish Springs National Wildlife Refuge, and the starkly contrasted ash colors of the Thomas and Dugway Ranges in the distance. On one occasion, I arrived at this marker just as a large, round full moon was rising over the Thomas Range and it was a melancholy, yet beautiful sight.

A few weeks ago when I was at this historical marker, I thought about how Uncle Nick Wilson — one of our local Pony Express Riders — wrote a fantastic tale about a large battle between Gen. Sydney Johnston and the soldiers at Camp Floyd against the Paiute, Goshute and Pocatello Shoshone out in the West Desert.

This is a mysterious episode because I have not been able to find any other references to this event other than Nick Wilson’s Book “White Indian Boy” in which he lays out the tale in chapter 19 titled “Johnston Punishes the Indians.”

Beginning on page 157, Wilson gives a detailed account of what happened. Basically, according to Wilson, the Indians had become so troublesome along the Pony Express Trail that the U.S. Army stationed at Camp Floyd had to do something about it. Therefore, Johnston began making preparations for a punitive expedition into the desert.

Wilson states that Maj. Howard Egan directed him to report to Camp Floyd and act as Johnston’s guide and interpreter during the expedition. When all preparations were complete, Johnston and his force, consisting of four companies of dragoons and 100 pack mules, left Camp Floyd and crossed the “Great American Desert” (the stretch between Simpson Springs and Fish Springs) in the night so they would not be observed by the Indians.

The soldiers then stayed at Fish Springs while Johnston dispatched Wilson and an Indian scout to go find the Indians. Johnston told them to only travel at night and to keep within the mountains during the daytime. Wilson and his companion likely crossed the Fish Springs Range, entered Snake Valley, and then crossed it and arrived somewhere in the vicinity of the southern Deep Creek Range or Mount Moriah. I say this because Wilson mentions that he and his partner got well up in the mountain and slept under the willows during the day, with the willows likely being aspen.

Wilson located the Indian camp and captured one with whom he used to be friendly. The Indian advised Wilson there were 300 warriors in the large encampment waiting for more Pocatello Indians to arrive. They planned to burn every Pony Express station along the line in Western Utah and Nevada, and kill every white man they could. This offensive was to begin in four days. Wilson returned to Fish Springs with the captured Indian and informed Johnston.

According to the story, the general was pleased with the information and readied his troops for a nighttime march so they could surprise the Indian camp with an early morning attack.

Wilson led Johnston and the soldiers to the Indian camp near a lake that had a lot of willows and rushes on its shore. Wilson is specific, stating it was near where the Pony Express Station “had been” during the early days of the Pony Express. This leads me to believe he may have been referencing to the Pleasant Valley area at the southern end of the Deep Creek Mountains. Wilson said the soldiers marched all night, sometimes dismounted, single file through very rocky, rough and dangerous mountain terrain, and by early morning they were arrayed around the Indian camp.

Wilson states that just before dawn, an old chief emerged from his teepee, and without orders, one of the soldiers shot him and kicked off a hideous battle. Wilson states that the papooses ran into the bulrushes when the firing started and the battlefield became a “Terrible Mix Up” of soldiers and Indians engaged in hand-to-hand combat, the soldiers using sabers and bayonets, the Indians using axes, knives and clubs.

According to Wilson, it was the worst battle he had ever seen — kids were squalling, squaws yelling, bucks yelping, dogs barking and officers shouting orders. Wilson states that this loud melee lasted about two hours and when it was over, every Indian, squaw, papoose and dog was dead.

This fantastic tale of a battle in the West Desert is perplexing because much of Wilson’s book and recollections can be corroborated by other sources, such as Egan’s diaries, Sir Richard Burton’s writings, U.S. Army reports from the National Archives or newspaper accounts from the day. But I have not been able to find any evidence of this occurrence, which at a time when Johnston’s Army was yearning for relevance and a mission, would have been headline news everywhere. Based on the numbers of warriors claimed to be present, it would have been on the scale of the Battle of Bear River several years later.

My opinion is Wilson’s account is nothing more than a good story or yarn told by a fascinating story teller. Even though the story is likely untrue, there were U.S. Calvary from Camp Floyd in the desert battling Indians.

In May 1860, during the worst part of the “Paiute” War, Lt. Stephen H. Weed and several companies of dragoons tracked and battled Indians in the West Desert with the most famous engagement taking place at Egan Canyon.

That story will be told at the end of our Utah Pony Express Trail adventure. Sir Richard Burton in 1860 states that several miles after his party left Fish Springs, they met Lt. Weed, 2 sub-alternate officers, 90 dragoons and 10 wagons. Burton states that Weed and his command had been in the field since May and had done “Good Service” against the Indians.

“We halted and liquored up, and, after the American fashion, talked politics in the wilderness,” Burton said.

I like to imagine what Burton and Weed discussed during the late summer of 1860. Perhaps the nomination of Abraham Lincoln, the question of slavery that was tearing the country apart, Indian troubles along the trails, and of course, Mormon issues.

I thought about these things, and all of the people who were in the West Desert before whites or other Europeans entered the Great Basin, while standing near the Pony Express Station marker about a mile west of Fish Springs.

Even though Wilson’s story of the desert battle is likely fiction, the fact remains that all of the wonderful Native American cultures that once dominated the lands, including our deserts are now all but wiped out. After these somber considerations, I headed north along the trail as my destination that evening was Boyd Station, where I planned to camp in the back of my truck’s shell.

From the marker, the Pony Express Trail Auto Tour route heads north and bends around the point of the Fish Springs Range. Along the way to this point, you will pass North Spring, which could have been one of the springs that George Bean and Porter Rockwell noticed mummified Indians in during their reconnaissance of the desert in 1854.

The spring is picturesque and accessible from the Pony Express Trail. Looking northeast, Granite Mountain on Dugway Proving Ground looks like an old battleship on the bottom of a dead sea. Even though I used the term dead sea to describe the scene, there is something beautiful and otherworldly about the West Desert out there. I

In next week’s article, we will head west along the trail to Boyd Station and continue the adventure. As always, if you venture into the West Desert, take a full tank of gas, plenty of water, a spare tire, and tell someone where you are going and when you plan to return. Don’t drive too fast on the gravel roads and avoid sharp rocks if you can.