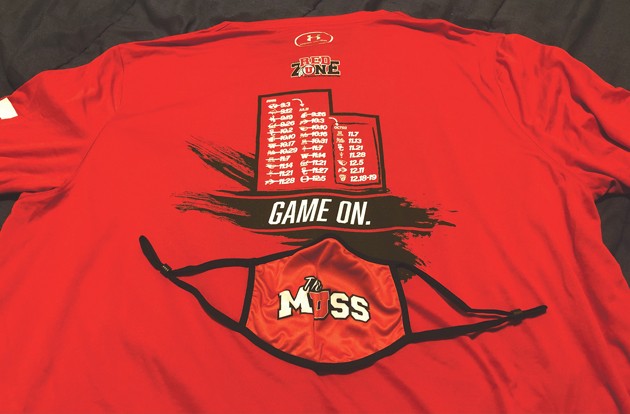 Transcript Bulletin sports editor Darren Vaughan was hoping for the University of Utah’s 2020 football season to start two weeks ago. Instead, thanks to COVID-19, all he got was this T-shirt (and face mask).

Another week. Another canceled game for the University of Utah’s football team. And another week of hoping beyond hope that the Utes can finally take to the field for the first time in 2020 come Saturday.

The question here is, is it even worth trying at this point?

COVID-19 has wreaked havoc on the Utes’ best-laid plans this year. One only has to look at the back of the shirt given to members of The MUSS this year. Instead of season tickets, MUSS members received a mask and a shirt with all three schedules the Utes tried to put together for the 2020 season — the original schedule released in January (which feels like 20 years ago at this point) that featured non-conference games against BYU, Montana State and Wyoming; the Pac-12-only version released in late July; and the South Division-based schedule released in early October.

Every game on the original two schedules has been crossed out. I’m about to take a bottle of Wite-Out and cross out the Arizona and UCLA games to make my MUSS shirt accurate. That leaves just four games on the Utes’ schedule — USC, Arizona State, Oregon State and Colorado — as well as the Pac-12 championship game.

I’m graduating from the U in just a few weeks. This was supposed to be my last season in The MUSS, and my last taste of college life until I have to grow up for real (for the second time). To say it’s disappointing that the Utes might not play at all this year is an understatement. It’s especially tough knowing that BYU is benefiting from a schedule that consists of Boise State and a bunch of directional no-name schools to make a run at the top-10.

However, it might be for the best that the Utes don’t end up playing this year. A four-game season doesn’t mean anything. Even if they go 4-0 and make it to the conference championship game, it’s probably not going to be enough to get them to a big-name bowl. Is it worth risking injury to go 3-1 and end the season in the Las Vegas Bowl or the Sun Bowl again? “A Utah man am I” — so the song goes — but I have a hard time getting behind that.

It might help the bottom line for the university’s athletics program (insert complaint about universities profiting off student-athletes here), but it really doesn’t help the athletes themselves that much. Why risk injury when there’s really not much to play for? All their scholarships are intact, and they all have an extra year of eligibility coming. They’re much better off taking this season off, using the opportunity to enrich themselves academically, and coming back ready to go in 2021.

As a fan, a shortened season feels unsatisfying. If the Utes were to go undefeated, it would be frustrating wondering what could have been. If they struggle because multiple players are out with COVID-19, it would be even more frustrating.

As much as I wish Utah’s football season could go on as planned, there’s a very real chance that the next Utes game I watch will be as an alum. Quite honestly, I’d be OK with that.

Darren Vaughan is a veteran sports writer from Moab, Utah. The pandemic spoiled his dreams of funnel cakes and barbecue-brisket chili in the stands at Rice-Eccles Stadium this season, but maybe that’s for the best, too. Email him at dvaughan@tooeletranscript.com.