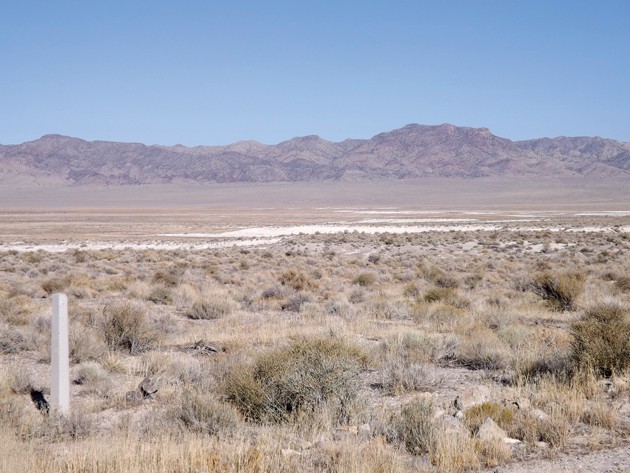 Dugway Range as seen from the west along the Pony Express Trail. The Dugway Range and Dugway Pass in particular were favorite ambush sites because the Indians were well aware that the riders would be forced to cross the range here or go 20-plus miles out of their way to the north or south to get around the mountains. (photo courtesy Jaromy Jessop)

Editor’s note: This is another installment in a multi-part series on exploring the Pony Express Trail through Tooele County. Last week’s article entailed the Bittner Knoll and Pyramid Peak area.

“Use the Bible all the time. The gun only in case of necessity.”

— Bronco Charley, Pony Express Trail rider describing guidance given to him by the firm of Russell, Majors & Waddell

Whenever I travel along the Pony Express Trail in Tooele County’s West Desert, I like to stop at a random, deserted point, like on the west side of Dugway Pass, and consider the plight of the young Pony Express Rider in 1860.

These brave riders left civilization and dashed into American Indian Country through periods of darkness, sweltering heat and deep snow. Just a week ago, I was in the Midwest and witnessed a terrifying thunderstorm with booming thunder, fantastic lightning and hard rain. I can’t imagine darting through the night in a storm like that, but the Pony Express boys did. High winds, swollen creeks, hail, rain, sleet, snow —  it didn’t matter — the riders charged on.

I’ve read stories about where riders lost the trail in the night and when daylight returned, had to find it again. Similarly, riders would sometimes get lost in a snowy white out. There was always the possibility that an Indian ambush was waiting around the next bend.

I found a book called “Pony Rider Biographical Snippets” by Ron Anderson in the National Park Service Historic Trails office in Salt Lake City. Anderson has done an amazing job of scouring old journals, books and newspapers to bring these stories back to life.

One account in his book states that when the Indian outbreak of 1860 occurred, express riders George Washington Perkins and Billy Fisher were making a 300-mile ride to Salt Lake City to alert the line when the following event occurred, perhaps near the west side of Dugway Pass.

Perkins wrote: “The Indians were lurking all along the trail. We could see their signal fires on every hill, and we knew we were running a pretty dangerous gauntlet, but we kept out of reach at every possible ambush point. Once they came within an ace of getting us. We had to go through a stretch of cedar and rocks. There was no way around it. We kept our eyes skinned and our revolvers ready, but we didn’t strike any trouble until we were just about through the dangerous place.”

There are only a few places that match this description along the Pony Express Trail in the county’s West Desert. The first one moves from west to east, which is the direction the men were riding. It may be Overland Canyon between Deep Creek and Willow Springs. The next one would possibly be the shortcut over the north end of the Fish Springs Range. But I believe Dugway Pass fits this description because you would have to deviate dozens of miles north or south if you avoided the pass on the trail and the story ends at Simpson Springs.

G. Washington Perkins continued: “Then suddenly whizz! An arrow went too darn close to our heads to be comfortable. And then Bang! Went a rifle. The bullet went right through Billy’s macheres and nearly hit me in the hip. We couldn’t see the Injuns who were paying us compliments. It was just a plain case of git out of it or git killed, so we put spurs to our horses and got out on the jump. I rode on to Simpson Springs with Billy and there Major Egan was. He sent Billy on through with another rider and took me back with him to help establish the broken line.”

Indians, terrain, and weather were not the only dangers the Pony Express riders had to worry about. Henry Tuckett, a Mormon pioneer of 1852, was one of dozens of Mormon men who answered the call to sign up for the Pony Express.

These notes were also taken from the previously mentioned “Rider Snippets” book: “Mr. Tuckett later stated that the boys were more afraid of highwaymen than they were of Indians. At one time he said he was carrying a large sum of money and felt that the information concerning it had leaked out through someone employed at the station. He therefore, left the usual route, stopped at a secluded spot and hid the pouch then went back to the station.

“There he met the rider that was going the opposite direction and they exchanged places. The other young man found Henry’s pouch at the designated spot and proceeded along the trail. He was stopped by highwaymen but when they did not recognize the rider (it should have been Henry) they let him pass thinking he was not employed by the Pony Express.”

It’s incredible to think these young men had the cunning to outsmart the bad guys and the courage to implement such a daring plan facing outlaws who would likely kill them for what they were carrying.

These are the things I think about while watching It’s cloud shadows drift over the ancient desert mountain features of the Dugway Range. There are some other interesting aspects of this area that should be mentioned but have nothing to do with the Pony Express — they simply share the geography.

Approximately four miles west of Dugway Pass along the Pony Express Trail, you will see a sign that reads “Dugway Geode Beds,” which points north along an old two-track road that skirts the western benches of Dugway Range. This road is very rough, rocky, and bumpy, but in less than two miles, you will come to the famous geode beds.

Carl Ege, in his article “Dugway Geode Beds,” wrote the best description of the formation process of a geode that I could find: “Approximately 6-8 million years ago, volcanic activity occurred in western Utah and deposited an extrusive igneous rock called rhyolite. Trapped gases formed cavities within the rhyolite, and millions of years of ground water circulation allowed minerals to precipitate into the cavities. The result is geodes with spherical shapes and crystal lined cavities.”

Ege goes on to state that these geode beds are not in the same place that they were created. He suggests that wave action from Lake Bonneville eroded all of the geodes out of the Thomas Mountains and then deposited them in great sand/rock bars nearly 15 miles north on the western base of the Dugway Mountains.

It is a fun adventure to go into the desert and look for geodes that are abundant at this site and easy to find if you know what you are looking for. Some heavy machinery has worked off and on at the site digging for the geodes. If you go out there, look for the pits. Take a shovel and with a little bit of digging, you can easily find a bunch of geodes varying from the size of a baseball to a large cantaloupe.

If you prefer the “surface rooter” method, you can just walk around at the excavation piles and find bits and pieces of geodes. Once and awhile, you will find a decent one intact. The unbroken geodes can be easily mistaken for garbage rock, so you need to know what you are looking at from a geologic standpoint.

If you go to the Utah Geological Survey website, it has great information on the geode beds. It is also useful to contact the BLM Salt Lake and Fillmore District offices for more information at 801-977-4300 or 453-743-3100, respectively.

In next week’s article, we will talk about a lonely place called Black Rock and what gentleman Samuel Clemens thought about our desert when he passed through in 1862.