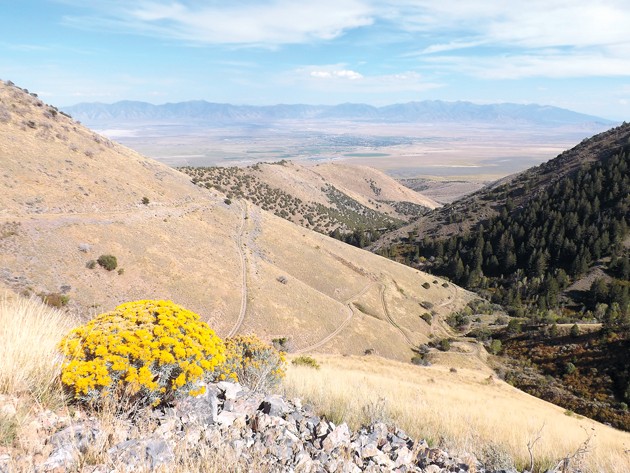 The view is spectacular looking east down Miners Canyon.

In last week’s article, I described a route halfway up Miners Canyon in the northern Stansbury Mountains where there is an old mining camp, evergreens and aspen that escaped range fires.

From that old line camp, we’ll now explore a few routes into the high country. Remember, unless you use an ATV to cut off some of the hike’s distance, you will make a serious physical, mental and emotional investment to reach the top of Timpie.

The distance is not extreme, but the road is rocky and the cap of the mountain is rough limestone. After 4 to 5 miles of foot travel in that terrain, a person can get beaten down. Know your limit and turn back if you must.

The area around the old mining camp is pleasant with tall grass, a few aspens and deep fir on the northeast facing slopes of the nearby hills. Several roads go in different directions from this place, so you have to decide what your destination will be.

First, a two-track dirt road heads south from this point, up the left fork of the canyon and disappears into the trees. This road leads to some mine workings high on an exposed west-facing ridge. I have never followed that road, but it is on my bucket list because it passes through the thickest part of the forest that remains in the canyon.

If you stand near the collapsed shack and look north, you will see the scar or trace of another road that quickly gains elevation and provides access to higher parts of the canyon. It is obvious the road was created by a bulldozer many years ago; it is cut deep into the hillside and there are wide turnouts. This is the route I took to reach the summit of Timpie.

The road from the mouth of the canyon up to the old mining camp is gradual, but once the switchbacks begin just beyond the mining camp, you gain a lot of altitude in a short period of time. After the first switchbacks, you will be several hundred feet above the canyon floor and have a great view down Miners Canyon into Tooele Valley.

The road continues west, climbing higher until it finally ends at some old mining ruins that cling to the steep head of the canyon. Elevation at the road end is 7,600 feet, which is 1,100 feet above the mining camp in the canyon below.

At the road’s end there is a large piece of old, rusted mining equipment. At this point look for a trail heading northwest through the bushes up an old tailings pile. This trail has been used by deer for many years, and if you can find it, it will take you all the way to the top of Timpie Plateau, passing through mountain mahogany and other mountain shrubs.

This short stretch from the mine ruins to the top of the rim is steep. If you don’t find the trail, just pick the most reasonable approach you can find to attain the rim. Once you are on the rim the most difficult work is done.

When you have climbed out of Miners Canyon, you will be on a long, burned ridge that heads north up to Timpie Plateau. This used to be one of the most beautiful places anywhere, complete with dense fir woods marching up the draws to the summit and thick stands of quaking aspen covering portions of the plateau.

The Big Pole Fire charred the forest like a blow torch up here and what remains is a depressing, surreal landscape. Tall, old fir trees have been reduced to standing columns of charcoal. If there ever was a walking dead forest, this would be it. There is hope for the future however, because aspen are making a comeback, growing up from the ashes at the base of the fir skeletons. All part of the fire cycle and in the end, beyond our lifetimes, the forest will be healthier for it.

The views from this elevated vantage point are breathtaking. To the north, Stansbury Island is on full display several thousand feet below out in the Great Salt Lake. It looks like an old battleship run aground at the edge of the sea. There is a good deal of terrain on top of the mountain that you would not expect to find when viewed from below. The plateau falls off abruptly down to Skull Valley in the west. To the south lies the spine of the Stansbury Range, and the interesting peaks above the Muskrat Canyon area, are visible. Looking east, Tooele Valley is laid out flat with the northern Oquirrh Mountains’ impressive bulk. Farnsworth Peak in particular rises boldly from the level plain.

I had heard tales of caves or sinkholes that drop hundreds of feet from the summit area on Timpie, but I failed to find any of them. I was more interested in the highpoint and what was left of the forest, so I crossed the plateau to a group of elevated rocks, climbed to where I could see down into Muskrat Canyon and Skull Valley and sat there to eat my lunch. The atmosphere was clear and there was no wind. It was about 6 p.m. and I had nearly 5 miles to go to get back to my truck, so I didn’t hang around long.

On the way back down I noticed a little horned toad. It got me wondering why I don’t see many of these creatures anymore. They used to be commonplace, but are increasingly rare. I also noticed cephalopods or white snail shells on top of the hill in thick soil within the bushes.

According to the Utah Department of Wildlife Resources, a group of California Bighorn Sheep were transplanted in the northern Stansbury Mountains, but I have not seen them in this end of the range. The view down to Lone Rock in Skull Valley and the Cedar Mountains to the west is picturesque.

The walk out was long and rocky. I was beat by the time I got back to my truck. If you bring your four-legged friend with you, make sure he/she is up to the trip. My Duke was completely worn out by the time we got back to the truck. Even though we were tired, it was enjoyable to descend the canyon as the lights came on in Tooele Valley and the moon rose over the Oquirrh Mountains. Night birds and smells of the woods in springtime rounded out the experience. If you venture into this area, take plenty of water. It is a dry country. For more information contact the Bureau of Land Management – Salt Lake District Field Office at 801-977-4300.