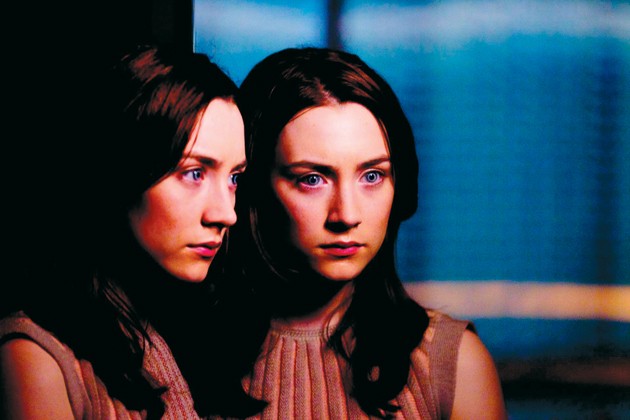 Saoirse Ronan stars as Melanie, a human infected with a mind-controlling alien parasite called the Wanderer, in the film adaptation of “The Host.” courtesy Open Road Films

If there’s one thing “The Host” proves, it’s that a movie based on a confusing story by a questionable author can still be done well.

“Gattaca” and “In Time” screenwriter Andrew Niccol’s translation of Stephanie Meyer’s vampire-less novel is surprisingly clear, fluid and human. His version is delivered neatly by Saoirse Ronan (“The Lovely Bones”) and Diane Kruger (“Inglourious Basterds”). And, for those still reeling from the abundance of glitter from the last movie based on one of Meyer’s books, virtually nothing sparkles in this one, so there’s that.

Melanie (Ronan), one of the last surviving true humans in a world filled with people who have been taken over by mind-controlling parasitic aliens (think “Animorphs” but with no animals and the Yeerks are nice and polite conquerers), is captured and infected with a soul called the Wanderer.

Although most humans are no match for their alien captors, Melanie puts up a vicious fight against the Wanderer, and eventually convinces the Wanderer to escape from the alien city and try to seek out other human survivors. Melanie hopes to find her little brother and her boyfriend.

The survivors find them, nearly dead after days of wandering through the desert, and almost kill them. But Melanie’s uncle, Jeb (William Hurt), insists she be locked up instead of killed. While being held prisoner, Melanie and Wanda, as the humans dub her, are almost killed several times, including at the hands of Melanie’s boyfriend, Jared (Max Irons), and Ian (Jake Abel). Melanie’s brother, Jamie (Chandler Canterbury), though, and Jeb, both believe Melanie is still alive. Gradually Melanie/Wanda become integrated into human society.

As she assimilates into the colony, Ian falls for Wanda, which causes problems with Jared, since Wanda is also Melanie. Because Stephanie Meyer just cannot write a story without a love triangle (except there are four people involved, but it’s not quite a square, so…quadrangle?). Meanwhile, one alien cop (Kruger), particularly driven to find and dispose of the Wanderer, begins to close in on the little holdout of humans.

Luckily, the story makes more sense onscreen. And Niccol, who also directs, makes a clean distinction between the sterile alien world and the grittier landscape of life for a human on the run. Much of the story is basically Melanie and Wanda talking to each other, in Melanie’s head, so it could easily look crazy, but no, it turns out OK. Ronan does a good job of clearly defining her two characters, and manages to build both into strong, sympathetic people.

Of course, Stephanie Meyer’s mark is still on this movie—besides writing the original novel (and word is she’s writing two more to make a trilogy), she’s listed as producer—so that might color your opinion one way or the other. But, like their respective books, this movie and “Twilight” are vastly different. Like “Twilight,” kissing is apparently the only way to show affection, and somehow Meyer pulls a happy ending out of the hat for the love quadrangle. There are some differences, too. You believe the main character and both love interests could be actual people in real life, and also in that, the happy ending in no way involves any kind of pedophilia.

If you’re a Twihard looking for something to fill the vampire void, this isn’t it. If you burn effigies of Stephanie Meyer, you still might like this one. It’s not the most inventive story, but it’s substantial enough, and there aren’t any plot holes large enough to fly a spaceship through. The movie sticks closely to the original storyline, but not in a bad way. And if you’ve seen the size of the book and thought a reread of the fourth Harry Potter book would be quicker, fear not—reading is, of course, suggested but in no way required to understand the plot.

I mean, “The Host” probably won’t be up for best picture at next year’s Academy Awards. It’s not quite that good. But as far as an entertaining sci-fi flick? You could definitely do worse.