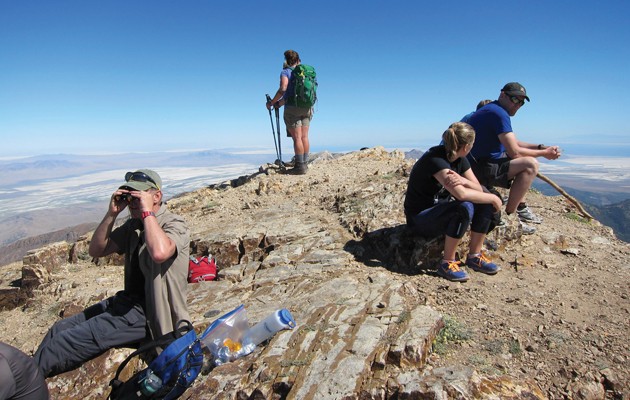 October 27, 2016
I’ve been called a lot of things, but history nerd beats all

Strange things are known to happen while standing in thin air on the roof of Tooele County.

I’ve been called a jerk, a fool, part of the human anatomy where the sun and moon doesn’t — or ever should — shine, and some other salt and pepper words not fit to print in this newspaper.

I don’t mind them, though; they come along with the job. When you write, photograph or edit the news about a place and its people, you’re bound to irk a few folks.

But one thing I have never been called before is a nerd. A nerd? From kindergarten to college degree, I always knew I wasn’t the sharpest pencil in the box. Earning mostly Bs and Cs in high school confirmed a full-ride scholarship to Harvard, Yale or even my hometown’s community college wasn’t in my future.

What further led me to compare my IQ to that of a dull pencil were my fellow classmates who exhibited nerd-like, nerdistic (or is it nerdism?) qualities. I admired how quickly they’d raise their hand in class to answer a question, or grin with satisfaction after getting back yet another test with a big red “A” and “Nicely done!” written across the top by the teacher.

Due to laziness, brittle self-confidence or both, it never occurred to me that I possibly could have joined their ranks if I had paid more attention to the chalkboard, or cracked open a textbook at home. Yet, my tendency to secretly lionize nerds was never enough to make me want to hang a Texas Instruments calculator from my belt in high school in the 1970s. I was an athlete then, a “jock” — not an aspiring scholar — and I had a reputation, or at least a vulnerable young ego, to keep intact.

So when one of my friends’ teenage sons called me a nerd, a history nerd to be precise, while standing atop Deseret Peak on a Saturday morning last July, you may understand why I paused and quickly blinked my eyelids a few times — and not because of the four-mile march to the peak’s 11,031-foot-high summit. For some, to be called a nerd of any stripe would be a put-down. But for me, it was a surprise, an honor, a gift.

What spurred my friend’s 14-year-old son to utter such a two-word manifesto was a question from a member of our ascent party. Most were from Salt Lake Valley and had never hiked Deseret Peak before. In fact, for some it was their first trip ever to Tooele County. Moments after we reached the summit, one of them looked west, slowly swept his hand across the horizon like a brush stroke, and said:

“So what am I looking at here?”

Although I wasn’t asked to be the day’s docent, I wasn’t asked to keep my mouth shut, either. I’m proud and enamored by the county’s landscape, history and people. And after writing about and photographing the place for more than 30 years, I just couldn’t let the question hang in the air.

I also suspected the Salt Lake members of our ascent party had heard one too many bad stories about Tooele County from Salt Lake media. Here was my chance to set the record straight, to help them see the county with new eyes. So with pride I launched into a tour guide monologue, pointing hither and yon on the compass rose.

Deseret Peak is the highest summit in the county and from its barren, rocky top, a nearly complete and deep view of the county’s entire 7,000 square miles lies below. It is the ideal place, like a roadside tourism information kiosk, to show and tell about one of Utah’s most visually unique, and historically rich, counties. From Lake Bonneville to the Pony Express Trail, I tried my best to leave no stone unturned, yet keep the homily brief.

After I finished, I thought I heard someone say, “Geez, I didn’t know that about Tooele County.” But I definitely heard, “You’re a history nerd.”

And there was the gift. I could have received no finer thanks.

Perhaps after I retire, I’ll make a new job for myself. I’ll offer to guide new Tooele County residents to the top of Deseret Peak for a little history tour. The round-trip hike is eight miles long with over 3,600 vertical feet of climbing. I’ll be an old man then. I better stay in shape. The air is thin up there.