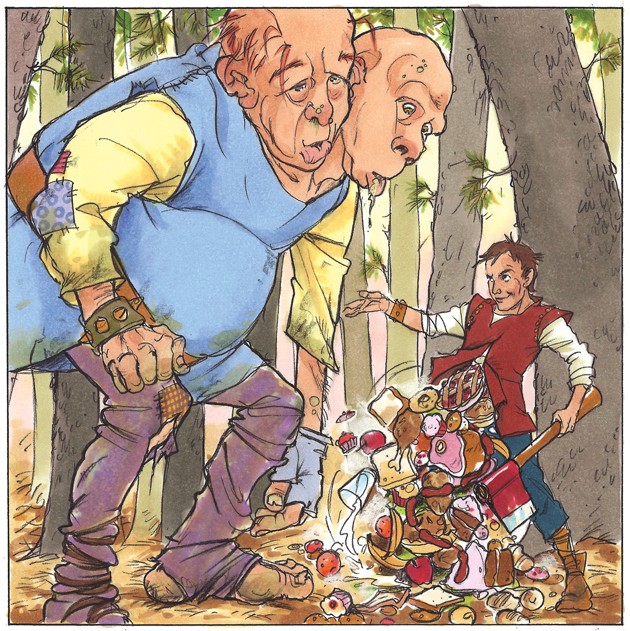 Once upon a time, a young man named Jack set out to look for work. He had walked a long way, but the day was cold and his jacket thin, so when he came to a beautiful house surrounded by a big white fence, he walked up to the door and shouted, “Hello, anyone home?”

An old man opened the door. Jack grinned and asked, “Any work for a strong young lad like me?”

The man thought a moment. “Well,” he said, “I could use a little help clearing some land. Come in for supper and we’ll talk.”

Jack walked in and was pleased to feel the warmth from a blazing fire. He was still more pleased when he saw the table piled high with food.

Jack sat down and joined the old man and his wife for a meal.

“Now listen, son,” the old man said, “I’ve hired hundreds of men to help with this task, but no one ever finishes the job.”

“I can finish any job I start!” Jack said.

The man raised his hand to quiet Jack. “I’m not finished. You see, there’s this problem. It’s the giant.”

When he heard that word, Jack did not flinch. “How big is this giant?” he asked.

“Enormous,” said the man. “The size of 10 men, with two big heads. And the trouble is, he believes the land is his!”

“That’s not a problem,” Jack said casually. “I’ll just finish eating, and we’ll have a look at what needs to be done.” He gobbled up a chicken, ate 10 slices of ham, slathered 14 slabs of bread with butter, and ate 10 big buttered yams.

Just when he thought he had had enough, the old man’s wife walked into the kitchen and returned carrying a tray of pies and cookies and cakes and a big pitcher of milk.

Jack did not want to insult the woman, so he pretended to eat. But instead of eating more, he slipped the food into a big leather sack he was carrying around his waist. He slipped in an extra chicken, more yams, some pies and cookies, some cake and three glasses of milk.

Then it was time to get to work.

“For clearing my land, I’ll pay you a good wage and give you supper every evening,” the old man said. “And I’ll pay you a sack of gold for each of the giant’s heads.”

“Sounds good!” Jack said and he listened to the old man’s instructions for how to reach the land.

Jack set off right away — the food had filled him with energy. He walked over hills and into the valley, and there he climbed to the top of the tallest tree he could see. With the hatchet he always carried, he began to lop off a limb.

The moment he cut that branch, he heard a rumbling sound — deep and low, like a lion growling, or an ocean roaring, or land shifting in an earthquake.

Sure enough, there was the giant taking one big step over the wide creek that circled the valley. In a moment he was beside the tree, eye to eye with Jack.

“What are you doing here?” the giant growled.

“I’m clearing trees for the man who hired me,” Jack said cheerfully.

“Well, stop right now,” the giant said. “This is my land and I don’t want it cleared!”

“Why don’t you just climb down,” the giant urged, “and come to my house for supper?” He tried to sound inviting and kind, though that’s difficult for a giant.

Jack knew the giant was trying to trick him, but he decided to play along. There’s no better way to fool a giant than to let him think he’s fooling you!

“Sounds great,” Jack said. He began to climb down the tree, but as he was climbing down, he asked, “By the way, giant, how strong are you?”

The giant roared with laughter. “I can tear down a hundred trees with one pull, that’s how strong I am!”

“That’s fair,” said Jack, “but I’m strong too. I wonder: Can you squeeze milk from a rock? Because I can!”

The giant was strong, but he was also jealous and didn’t like to hear stories about others’ strengths. So Jack’s boast infuriated him. “That can’t be true,” he said. “You’re only a skinny lad!”

The giant looked at Jack’s skinny legs and skinny arms and knew he had nothing to lose. Besides, no one can squeeze milk from a rock. So he reached down and picked up a rock. He tossed it to Jack and said, “Let’s see you try.”

Jack took the rock and held it against his stomach, up tight against that leather pouch. He squeezed as hard as he could and pushed against that pouch. Soon milk began to drip from the pouch and it landed at the giant’s feet.

The giant was furious. “Anything you can do, I can do better,” he said and picked up a rock and began to squeeze. He squeezed so hard, that rock was ground to dust, but not a drop of milk appeared.

Jack laughed. “I thought you said you could do anything I can do!”

“I can!” the giant bellowed. “That was a faulty rock!”

“Well, then,” Jack said, “can you do this?” He reached for his hatchet and slit open that sack under his clothes. Milk and chicken and pies and cookies and cakes began to pour out onto the ground, and when all the food was gone, Jack pulled a needle and thread from his pocket and sewed up that pouch as if he were sewing his stomach.

“I can do anything you can do!” the giant roared again, “toss me that hatchet.”

Jack threw him the hatchet.

The giant cut open his stomach. Naturally, he died right there.

So Jack climbed down the tree, cut off the giant’s two heads, and set off to receive his reward.