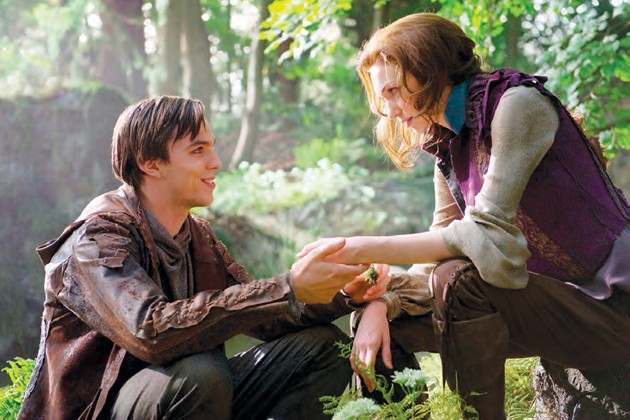 Nicholas Hoult, as Jack, and Eleanor Tomlinson, as Isabelle, star in “Jack the Giant Slayer,” which opens in theaters Friday. courtesy of New Line Cinema

Probably anyone who has fallen in love with a story as a child always secretly hopes it comes true.

“Jack the Giant Slayer” is a story about a boy with just such a love.

As a youngster, farmboy Jack knew every word of the story of King Erik’s defeat of the giants by heart, and longed to be part of the king’s giant defense squad. As an adult, Jack (Nicholas Hoult) finds himself living a somewhat drearier existence.

In desperate need of money, Jack is tasked to sell his horse and cart at the market. A monk offers him a princely sum for the animal — to be collected at the abbey, later, upon the presentation of a small bag of beans.

The beans, along with King Erik’s crown, are the stuff of legend, so much so that Jack’s uncle is convinced they are fakes and punishes Jack for his gullibility. But when the rain starts, one of the beans gets wet and sprouts a giant beanstalk like in the story. This would be more exciting for Jack if Princess Isabelle (Eleanor Tomlinson), running away from her arranged marriage to the much-older Roderick (Stanley Tucci), hadn’t stopped for shelter at Jack’s cottage and summarily been swept up the stalk.

Jack volunteers to join the rescue party up the stalk, led by the dashing Elmont (Ewan McGregor). When the party arrives at the top of the plant, they find Princess Isabelle gone, but her tracks show her going into the land of the giants. They split up, but eventually make it to the giants’ castle, where Isabelle, King Erik’s descendant, is being held.

What began as a straight-forward rescue mission, turns out to have much higher stakes. Besides the danger of being eaten by the giants, Jack, Isabelle and Elmont discover they have a more frightening foe in Roderick, who has made himself king of the giants and is planning on using his new power to conquer the land below.

“Jack the Giant Slayer” is not high art. The CGI at the beginning is beyond awful (hashtag first world problems, hashtag spoiled by technology), though it does improve significantly by the time you get to the main body of the story. Most of the story is a little expectable, and it feels at times like they tried to put too much story into one film.

But where it may lack in Oscar-winning panache, “Jack” makes up for in fun. It’s sort of a rollicking, slightly cheeky adventure tale with a pale modern hue, kind of like “Stardust.” There’s nothing particularly clever or new about it, but for whatever reason it is charming and entertaining, and it puts a new shine to a dusty old tale.

The stars seem to think so, too. McGregor (who is adorable) and Tucci (who hams it up as delightfully diabolical) especially seem to be having fun with it, as does Bill Nighy, who Davy Jones it up as the two-headed giant general. Leading the parade is director Bryan Singer, whose vision here is a bit more whimsical than any of his “X-Men” movies have been. And while none of us in the audience get to live in our favorite stories, following Jack on his great adventure is an acceptable substitute.

“Jack” probably won’t be one for the ages, and it’s a little too gory for younger kids (which is a pity, because they’d probably like it otherwise), but it does what it seems to have come out to do, which is make a magical blend of whimsy, fairytale and fun.