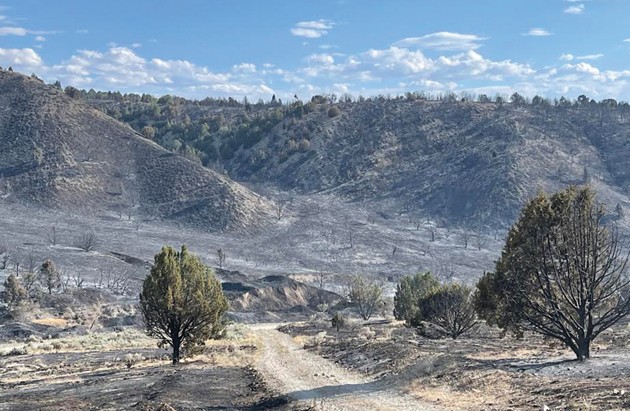 The land burned by the Jacob City fire has been reopened to the public.

The fire that began at the Jacob City Trailhead and spread to over 4,100 acres in Soldier Canyon is now 100% contained and Soldier and Dry Canyons have reopened.

The canyons reopened on July 27.

Visitors to the area are asked to use caution, as hazards, such as fire-weakened trees, may still exist.

Off road vehicles should stay on designated routes and stay off the burn area to allow for regeneration of plant species.

Currently, there are still crews on the mountain making sure the fire is controlled, according to Kelly Wickens, Division of Forestry, Fire, and State Lands public information officer.

The fire burned 4,185 acres. It will cost over $7.3 million, which will partially come out of the State of Utah’s pocket and the Bureau of Land Management, according to Wickens.

Some of the cost of fighting the fire may also come from the individual who started the fire, Gary Carr, whose generator caught fire after a user error, according to Jon Smith, North Tooele Fire District’s public information officer.

The fire spread quickly, because of dry conditions, low humidity, high wind speeds, and high temperatures, the perfect conditions for a fire.

By the next morning, it had burned over 3,000 acres, was 0% contained. It caused evacuations of Settlement and Soldier canyons.

Help came from all over the state and country as hundreds of firefighters and officials traveled to Tooele County to help put out the fire.

Their efforts proved successful and by July 19, the fire was 93% contained.

Now, the fire is 100% contained and crews are working to keep it controlled and ensure the canyon is safe for recreators

Overall, helicopter flight time totalled over 294 hours and over 230,000 gallons of water were used, according to Wickens.