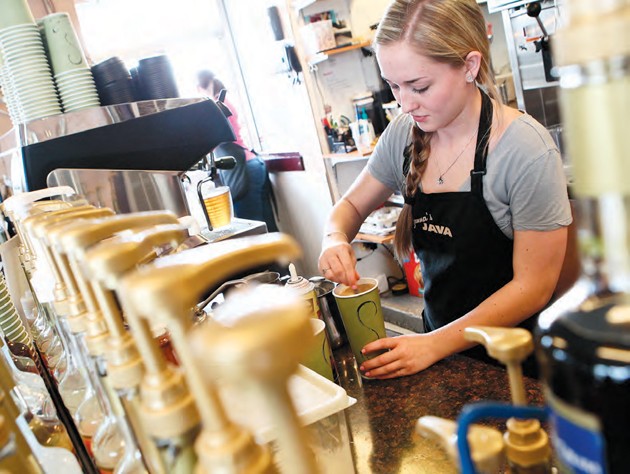 Shayla McBride makes a drink Thursday at Janna’s Java in Tooele. The coffee shop has experienced plenty of success in its 10 years of business.

There is a corner on Tooele’s Main Street that smells delightful every morning. The discernible driver can detect the rich aroma of fresh coffee beans brewing as they waft from a tiny 300-square-foot building on the southeast corner of Main Street and 400 South.

For ten years Janna’s Java has been serving a variety of hot drinks to please the taste of Tooele’s traveling crowd. Janna’s opened its drive-up window on April 1, 2003.

“We started out with Janna and myself and some help from Janna’s two brothers,” said Dave Millard, half of the husband and wife team that owns and operates Janna’s Java.

Janna Millard worked hard to prepare for the opening of the coffee shop that bears her name.

“She developed the recipe for each drink from scratch at home,” said Dave. “Through trial and error she figured the right amount of each ingredient to make each drink taste the way she wanted it to.”

When they first opened the store, Janna would often spend 18 hours at the shop. Space inside the store was set aside so Janna could bring their baby to work.

In the first year of their marriage, Dave and Janna bought a home, Janna left her military career, they opened a business, and their first child was born. Today Janna’s Java employs 12 people and serves an average of 300 customers per day. The origins of Janna’s Java goes back to 2002 when Dave and Janna met, fell in love and got married.

Janna worked at Dugway Proving Ground as a security officer and Dave worked in Salt Lake City for a sign company owned by his family.

The half-way point between both places was Tooele, and that’s where they agreed to live. Janna’s assignments as a military police officer had taken her on tours of duty to Haiti, Panama, and Korea.

“Janna grew tired of putting on her fatigues and heading out to Dugway,” said Dave. “We often talked about what else she would like to do and once she mentioned running a coffee shop. I told her that I could help her make that happen.”

Dave’s father bought and sold many businesses while Dave was growing up, so starting a new business was nothing new to him. Dave had also sold signs to Java Jo’s in Salt Lake City. A “For Rent” sign on the small building in front of the former bowling alley caught Dave’s attention, and he called the number on the sign. By the end of the day, he had a oneyear lease.

After a $20,000 investment in the building and equipment, the drive-up coffee shop was ready to go.

Tooele’s commuting workforce quickly found the convenient location and is still the mainstay of customers for the business.

“We do half our day’s business between the hours of 7 a.m. and 9 a.m.,” said Dave. “And they buy 24-ounce drinks so it lasts them for the whole drive into Salt Lake.”

Janna and Dave had to educate some Tooeleans about the finer points of coffee-based drinks when they first opened.

“A customer would order an espresso and look a little disappointed when we would hand them a small cup with just an ounce or two of drink,” said Dave. “Then we would have to tell them how they could transform the concentrated espresso into other drinks like a latte.”

Dave outlines several things that have contributed to the store’s success.

“We have great customer service and we use high end ingredients, nothing but the best,” he said.

Janna’s equipment includes a new $10,000 espresso machine that was the first of its kind to be used in North America. Location is also important, according to Dave.

“We are on the right-hand side of the road as people leave town in the morning and it is in an area where the speed limit is under 40 miles per hour,” he said.

While cars line up in the morning, Janna’s has four people on duty during peak hours to take orders and prepare drinks so the line moves fast. “Coffee shops are unusual in that they are the only drive-up business where the staff receives tips,” said Dave. “While we have a menu, people order their drinks customized and when we serve them the way they want to be served, our customers are grateful and they leave tips for the staff.”

Dave said that Janna’s has repeat customers, some that go back to the first day the place opened.

“It’s kind of like ‘Cheers’,” he said. “We get to know their names and what they like to drink.”

Hot drinks are also available cold brewed and iced. There is also an assortment of frozen coffee drinks.

Janna’s has several flavors that can be added to any drink. Fruit smoothies and Italian sodas are also included on the menu, along with hot chocolate and apple cider.

While the store has a front door, there is no place for customers to sit down. Janna’s is strictly a to-go business, according to Dave.

While Janna and Dave aren’t ready to franchise stores and become the next Starbucks, Dave does have plans for the future.

“We are working on a new website that will include the ability for our customers to buy coffee and equipment online so they can make their own Janna’s coffee at home,” he said.