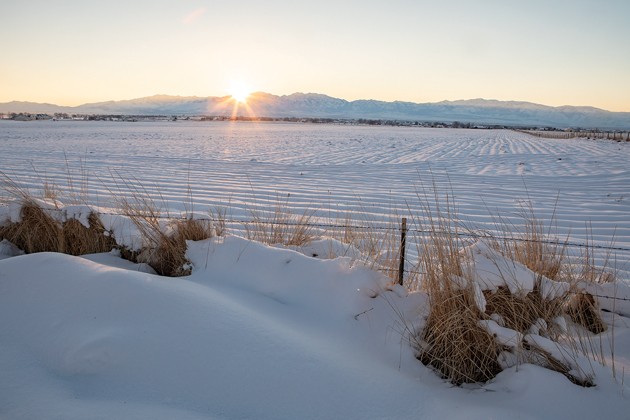 The sun begins to set over a snow-covered Tooele Valley. January received above normal precipitation.

Sometimes, all it takes is a good snowstorm or two to turn things around.

The big storm that hit Tooele Valley on Martin Luther King Day deposited nearly a foot of snow and contained enough moisture to put January in the above-normal precipitation category.

According to Ned Bevan, Tooele weather observer for the National Weather Service, January received 11.4 inches of snowfall and 1.82 inches of total precipitation for the month at his reporting station. Normal snowfall for January is 12.7 inches and normal precipitation is 1.07 inches.

The snow and moisture helped boost the water-year total to 6.29 inches. Normal water-year precipitation by the end of January is 6.05 inches. Water years begin on Oct. 1 and end the following year on Sept. 30.

Bevan said the big storm on Jan. 21 also helped make a little local weather history: The last time total precipitation for a water year was above normal occurred in September 2017.

He is encouraged by this winter’s wetter weather pattern, which is in stark contrast to last winter that saw few storms and left mountain snowpack thin by spring.

“We just have to see what February does for us,” he said. “We hope the weather continues to be normal or above normal.”

Normal precipitation for February is 1.33 inches while normal snowfall for the month is 14.1 inches.

Bevan is also encouraged that the two wettest months of the water year — March and April — are on the horizon. March’s normal precipitation total is 2.32 inches and April’s is 2.49 inches.

The local weather observer said total water-year snowfall by the end of January stood at 44 inches. Normal is 43.5 inches.

Bevan said the highest recorded temperature during January was 48 degrees on the 17th and 21st with the coldest — 3 degrees — measured on the 1st. January’s average daytime high is 38 degrees and the average low is 20.9 degrees, Bevan said.