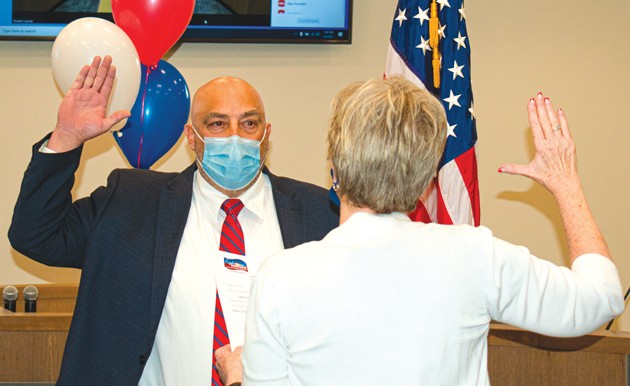 Jared Hamner takes the oath of office as a County Council member from Tooele County Clerk Marilyn Gillette on Jan. 4, 2021.

Sworn into office last week as the first Tooele County Council member from District 4 was Jared Hamner of Stansbury Park.

Hamner’s full-time job is the executive director of the Tooele County Chamber of Commerce, a position he has held since 2012.

Born in California, Hamner’s father served in the Air Force.

“We moved back east to Indiana,” said Hamner. “That’s where I grew up.”

Hamner said he was raised on a “small” 350-acre farm in Shelby County, Indiana.

“There was stuff to be done every day,” he said. “It was a working farm. We grew corn, soy beans, and wheat.”

After high school Hamner served a mission for the Church of Jesus Christ of Latter-day Saints in Tulsa, Oklahoma.

After his mission, Hamner studied at Indiana University – Purdue University Indianapolis, but a brother, who lived in Utah, convinced him to move to Utah to finish his studies at the University of Utah.

Hamner said he left Federal Express after a while to go to work for Hyrum Smith at Franklin Quest.

In 1996, Hamner changed careers again and went to work for the Utah Boys Ranch, which became West Ridge Academy.

He accepted the position of executive director for the Tooele County Chamber of Commerce in 2012, after 16 years with West Ridge.

Hamner and his family moved to Tooele County several years before he started to work out here.

Living in a mature neighborhood in Taylorsville, he moved to Stansbury Park in 1996 so his daughters would have neighborhood friends that were their age.

Hamner said one of the first things he noticed as executive director of the Chamber of Commerce was that the county had a transportation problem.

He dusted off almost 30 year old plans for the Midvalley Highway and went to work with chamber leadership, state leaders, and Utah Department of Transportation leadership to get the highway back on the books before handing the project back to local government.

Hamner said he has also worked with Rio Tinto on the proposed state Route 201 extension directly into Tooele County.

Transportation, finding other funding sources than property taxes for county government, and infrastructure were Hamner’s major campaign issues, he said.

“There are some changes being made at the county level and it’s time to move forward, so I ran for it,” said Hamner, when asked why he ran for office.

Hamner’s dual role — full-time at the Chamber of Commerce and part-time at the County Council has raised some concerns about conflict of interest.

Hamner said he has disclosed the conflict and will recuse himself from any discussion or vote on that specific funding.

While they’ve only had a few meetings as a group, Hamner said he is excited about working with the other council members.

“We all have different personalities, but we’re a team,” he said. “We’ll have disagreements and they may be vocal, but we will come together and move forward to make Tooele County a swell place to live, visit, work, recreate, and to do business.”