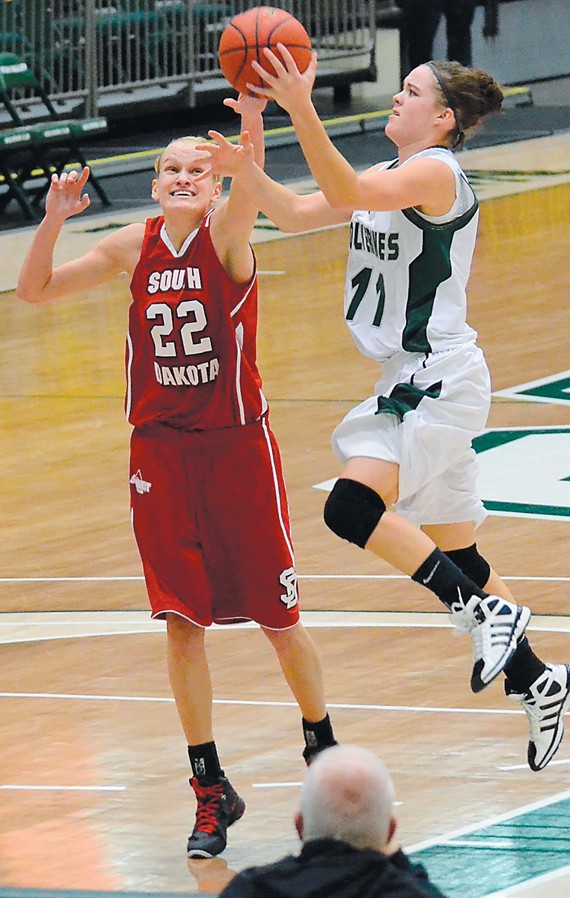 The 21-year-old power forward from Stansbury Park helped the Wolverines finish second at the GWC Conference Tournament on March 10 in Chicago to North Dakota. North Dakota also won the regular season title with a 9- 1 record while the Wolverines were tied for second with New Jersey Institute of Technology, both with 6-4 conference records. The GWC includes six schools spanning the country in the states of Utah, Texas, New Jersey, North Dakota and Illinois.

Playing basketball since her youth, Jensen worked hard and received a plethora of awards not only for her skill in basketball, but also for her 4.0 GPA in high school. She was also a talented competitor in track and field where she specialized in sprints and hurdles. Basketball, however, was always one of the main focuses of her life.

“I must have been playing this sport since I was about 3,” Jensen said. As a student at Grantsville High School, Jensen was a First Team All-state in both 2008 and 2009. In 2009 she was honored as the Region’s Most Valuable Player (MVP) and became the Academic All-state for basketball in 2009.

“Playing at Grantsville helped build my confidence and prepare to be on a team. School has always been a big part of my basketball career,” said Jensen.

Now a junior at UVU, she has further proven her worth as a basketball player. As a college sophomore and a transfer to both UVU and in turn the GWC, Jensen received GWC Newcomer of the Year and twice earned GWC player of the week.

This year, she is the No. 2 scorer in the GWC with a 13.6 points per game average and a double-digit average in rebounds. She was also honored as part of the All-GWC’s First Team.

“I was surprised because usually the player of the year goes to someone on the firstplace team, which we weren’t,” Jensen said. “I just had good numbers.”

Once graduated from college, Jensen plans to pursue a career in the medical field. Unsure yet if professional basketball is included in her future, Jensen is certain that regardless of the level, she will always play basketball. “I just love the sport in general. Ever since I started, my parents and coaches have helped me through it, and to enjoy it more,” she said.