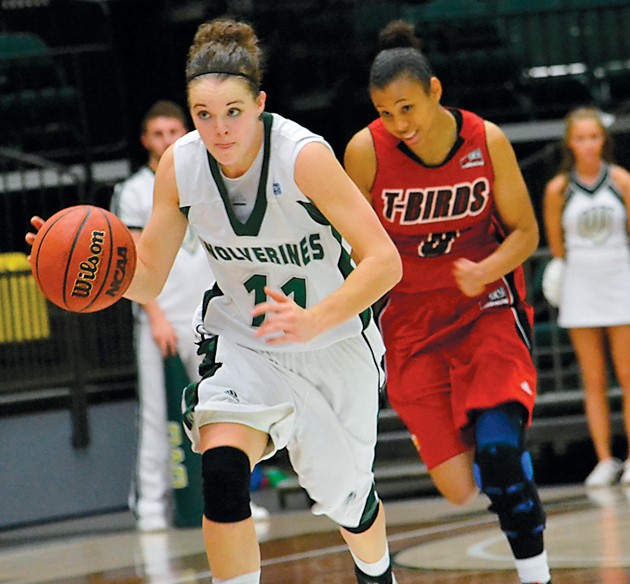 Sammie Jensen ended last year thinking she had reached the plateau of her success.

As the 2011-2012 Great West Conference Player of the Year, Jensen capped a brilliant junior year at Utah Valley University, so how could she possibly top it during her senior season?

“I didn’t think after last year it could get any better,” Jensen said. “If I were to paint the perfect picture of it, this would be it.”

Jensen carried that success over to her senior year as she works toward another GWC Player of the Year honor, having already helped the UVU Wolverines clinch a share of the 2012-2013 conference championship.

“It’s gone really well,” Jensen said of her senior season. “We’re starting to play a lot better together and not worrying about anything.”

The UVU women’s basketball team clinched a share of the conference championship on Saturday when it defeated Chicago State 63-55 on the road in Chicago. Jensen scored 18 points and grabbed 21 rebounds in that championship-clinching win, which marked her 18th double-double of the season.

“Sammie does special things on the court,” Nixon said. “There aren’t many that rebound like she does.”

She pointed out that Jensen’s rebounding range is above that of those she competes against. She can cover so many different areas on the floor to grab rebounds, which is why she tallies so many every game. Jensen ranks second in NCAA Division I for rebounds with 13.6 boards per game. She’s just behind Robert Morris’ Artemis Spanou at 15.1 boards per game, and she’s ahead of big-name women’s basketball players like Oregon’s Jillian Alleyne and Stanford’s Chiney Ogwumike.

“Obviously Sammie has been a major contributor while she’s been here since she was a sophomore,” Nixon said. “She’s consistent, and all three years she’s produced. She’s someone we’ve relied on both ends of the floor. Sammie’s dependability is something we all appreciate.”

Jensen’s favorite memory of this season so far was UVU’s 51-50 road victory against Texas-Pan American on Feb. 16. In that game, Jensen scored 21 points and grabbed 21 rebounds, which at the time was her 17th double-double of the season and set the school single-season record for double-doubles.

Most importantly, Jensen put in the game-winning layup with 2.6 seconds remaining on the clock that gave UVU the close victory. Jensen dashed up the sideline in the closing seconds and received a bounce pass from teammate Cydne Gray. Jensen drove the baseline and put in the bucket for the win.

The lessons Jensen learned at Grantsville High School have helped during her basketball career and contributed to the success she’s had this season.

“You have to push through things,” she said. “You don’t have to be perfect. Work hard and you’ll accomplish whatever you want.”

“Hard work is so big,” she said. “You have to do a lot of stuff you don’t want to. In order to become successful you have to do the little things, and it’ll lead to better things.”

Jensen said she has no regrets as her college career winds down, and she hopes to live that way throughout her life and into the decisions she makes after her time as a Wolverine officially wraps up. She knows she’ll attend medical school eventually, but she may not be done playing basketball just yet. She said she might try to play in Europe first before taking on medical school.

As for basketball at UVU, Jensen still has two home games and the GWC tournament left to play. The Wolverines host California State University Bakersfield Wednesday at 7:05 p.m. and host Houston Baptist Saturday at 3:05 p.m.

“She’s definitely helped us to become a program that’s respected,” Nixon said. “She’s been a big part of our success this season and winning a conference championship.”