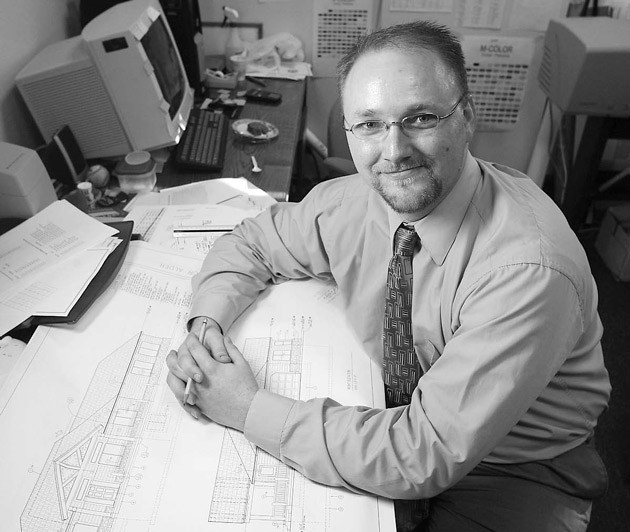 Raymond Johnson Jim Lawrence, 31, has been hired to replace Raymond Johnson as head of Tooele County’s engineering department. Lawrence is a native of Tooele and says he looks forward to serving the community.

J. Raymond Johnson has headed up Tooele County’s Department of Engineering for the past 14 years, but as of Tuesday a new man is in charge.

Johnson said retirement had been calling his name for two years — and being 66 he felt it was time to heed the call.

He plans to serve a mission for The Church of Jesus Christ of Latter-day Saints in Salt Lake City. His service mission will entail working on some of the church’s real estate matters but he and his wife, Pamela Bevan Johnson, will remain Tooele residents.

A native of Tooele, Johnson graduated from Tooele High School, served a mission for his church in South Africa and was a member of the Utah National Guard. He graduated with a degree in civil engineering from Utah State University and married his wife when he was 26 and she was 21.

They are the parents of three children, Jennifer (Jon), Ryan (Shara) and Chad.

Before getting hired by the county, Johnson worked in a private engineering business with Joe D. England as well as out at Dugway Proving Ground.

Johnson has been a member of the Kiwanis Club, Tooele City Planning and Zoning Commission, Tooele City Council and the Tooele County School Board.

While Johnson will miss the challenges he had to work through and “the interesting people” he met, he won’t miss dealing with the public on a daily basis.

“Some people can be very hard to deal with when they don’t know what’s going on,” said Johnson noting that once people understood the situation or property problem, they seemed to simmer down.

During Johnson’s time in the county engineering position a policy was established to help property owners “get into compliance the simplest and easiest way possible. This was not always possible, but that was our goal.”

Ray’s biggest complaint over his tenure was that state Route- 36 never went where he thought it ought to go. Noting that the Utah Department of Transportation (UDOT) had both state and federal regulations to deal with, he said, “common sense should have prevailed.”

In regards to the huge amount of growth that has occurred in the county over the past decade he said, “I have always felt the bubble would burst, but it just happened to do so under my watch.”

To the people he has worked with over the years Ray noted, “I would like to express my appreciation to all of them. I go around the county offices and always see dedicated and hard working people. I am very pleased with the quality employees that we have in this county. We are fortunate to have them.” Though his position was fulltime and then some, Johnson was glad to have it as he “has always had an interest in the county.”

Co-worker Nicole Cline, who started working just a month and half after Johnson, said she will miss bantering back and forth with him.

A common phrase they would say to each other was “Stuff it” but when Johnson called Cline once while out in the field with the then newly-elected county commissioner Gene White a funny thing happened.

When Cline had been told that Johnson was on the phone she picked it up and said, “Stuff it,” but what she didn’t know was that Johnson had handed the phone to White who was flabbergasted by the comment.

Many apologies later, the three often joked about the ordeal. Former county commissioner Leland Hogan was serving when Johnson was first hired and said Ray was the first licensed engineer ever in that department.

“[Johnson] brought a lot of professionalism to that office and has continued in that effort,” Hogan said. “He has done a lot for the county.”

Hogan said before Johnson came, the county was looked at as a a non-growth area. That perspective changed with Johnson at the helm of the county engineering department.

About the new guy

Though Johnson will be on hand for awhile to help him out, Lawrence is likely to learn the ropes of the county engineering department quickly as he has been in the civil engineering field for many years.

After graduating from USU, Lawrence worked for the UDOT for six years spending most of his time in the design department. He was co-lead on the state Route 36 project with Robert Miles.

Lawrence said, “This community has given so much to my family and me. I feel this is an opportunity to give something back.”

He and his wife Melina are the parents of four children: Isaac, 8; David, 4; Joshua, 7 months; and Michael who passed away four years ago.

According to Tooele County’s Internet web site, under the direction of Jim Lawrence the Department of engineering is charged with the long and short range planning, development, building inspection, road maintenance, code enforcement and infrastructure improvements in Tooele County.

In order to accomplish this, the department has five divisions. The planning and zoning division handles the short- and longrange planning efforts of the county. They also maintain and enforce the zoning and subdivision ordinances. This division also is the criminal code investigation and enforcement element.

The building inspection and code compliance division reviews all plans of structures being built in Tooele County. They perform plan reviews as well as on site inspections. They enforce the building, mechanical, plumbing, and electrical codes.

The roads division maintains the 1,253.73 miles of roads in Tooele County. They are also responsible for maintaining the storm water systems.

The GIS Division is responsible for the creation, manipulation, interpretation and maintenance of spatial data within the county.

Other responsibilities include cartographic design and map production.