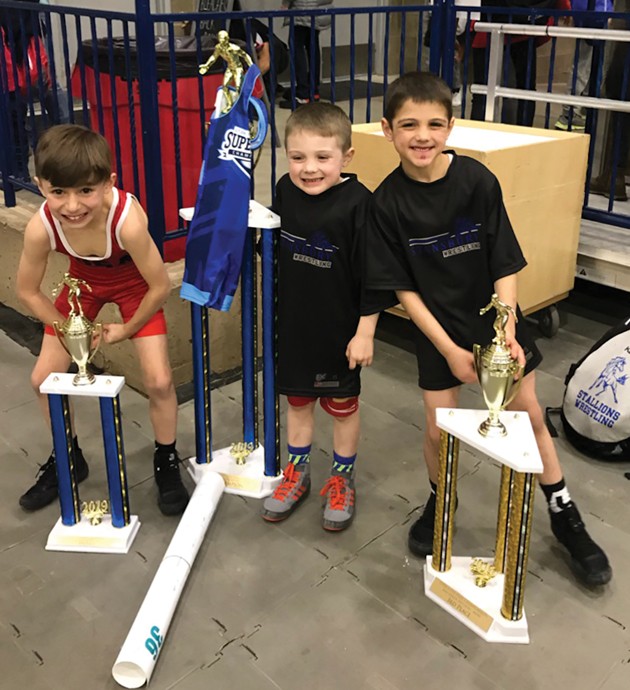 The Junior Stallions wrestling team traveled to the Legacy Events Center and competed at the Utah Youth Super State Tournament in February. It was the last tournament of the folkstyle season and included the top wrestlers in the state.

Going in to the tournament, the Junior Stallions had a handful of kids ranked and projected to place high. Although not all of them placed, there was a handful of them who did very well.

In the youngest division of Pre-K-K, Kayce Linnell was the champion and brought home the coveted “champion” singlet and a trophy that happens to be taller than him in the 36-pound weight class. He was able to put it away with a quick 22-second pin in the finals.

In the first-grade 43-pound bracket, Breckan Page made the finals but lost a tough match and ended up in second place. In the second-grade 46-pound bracket, there was a matchup between teammates for third place, with Keian Linnell overcoming Carson Spires. Both Keian and Carson wrestled a great tournament.

In the sixth-grade 145-pound bracket, Brock Ware battled tough and came home with sixth place. The rest of the team, which included Lucas Otero, Mason Herndon, Yama (Robinson) Zukeran, Dayten Gochis, Tyler Khoundet, Anthony Hamilton and Joseph Willoughby, all wrestled very well but came up one or two matches away from placing.