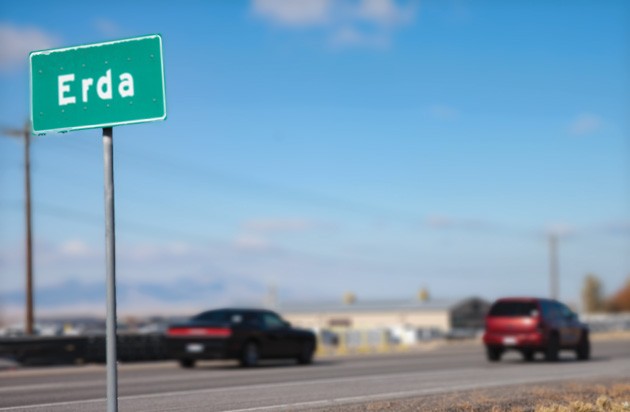 An "Erda' sign on state Route 36. A district court judge denied a request to dismiss a lawsuit that could lead to the disincorporation of Erda.

A 3rd District Court judge has denied Erda City’s request to dismiss a lawsuit that challenges the city’s existence.

Third District Court Judge Teresa Welch denied a motion from attorneys for Erda City and the lieutenant governor to dismiss a lawsuit that asks that the incorporation of  Erda be declared invalid because of deficiencies in the incorporation process.

The lawsuit was filed by attorneys for John Bleazard, Mark Bleazard and Six Mile Ranch Corporation in February 2022.

In their motion for dismissal, the attorneys for Erda City and the lieutenant governor listed six claims to support their request. After hearing arguments from attorneys from both sides, Welch found that there was no basis to dismiss the complaint in a written ruling issued on Oct. 27.

One of the claims for dismissal involved the delay in filing the lawsuit.

In regards to the other reasons for dismissal, Welch said the complainants do meet requirements for standing and have sufficiently pleaded facts including harm to support their claim.

However, Welch found that three legal points raised by the defendants as reasons for dismissal — res judicata [a matter that has been adjudicated by a competent court and may not be pursued further by the same parties], equitable doctrines, and substantial compliance — were not appropriate to be raised in the motion for dismissal stage.

John and Mark Bleazard assert that they signed both the feasibility study and incorporation petition only for their personal property in Erda, not for Six Mile Ranch.

The complaint alleges that the sponsors of the Erda incorporation petition altered the request for a feasibility study to indicate that John and Mark Bleazard signed on behalf of Six Mile Ranch.

Furthermore, the complainants also assert that City of Erda’s paperwork for incorporation with the Lt. Governor’s Office was not submitted within the statutory timeline because they failed to include an approved local entity plat map by Dec. 16, 2021. Erda’s failure to meet the deadline should have invalidated the incorporation, according to the complaint.

The denial of the request for dismissal allows the case to continue its way towards a jury trial.