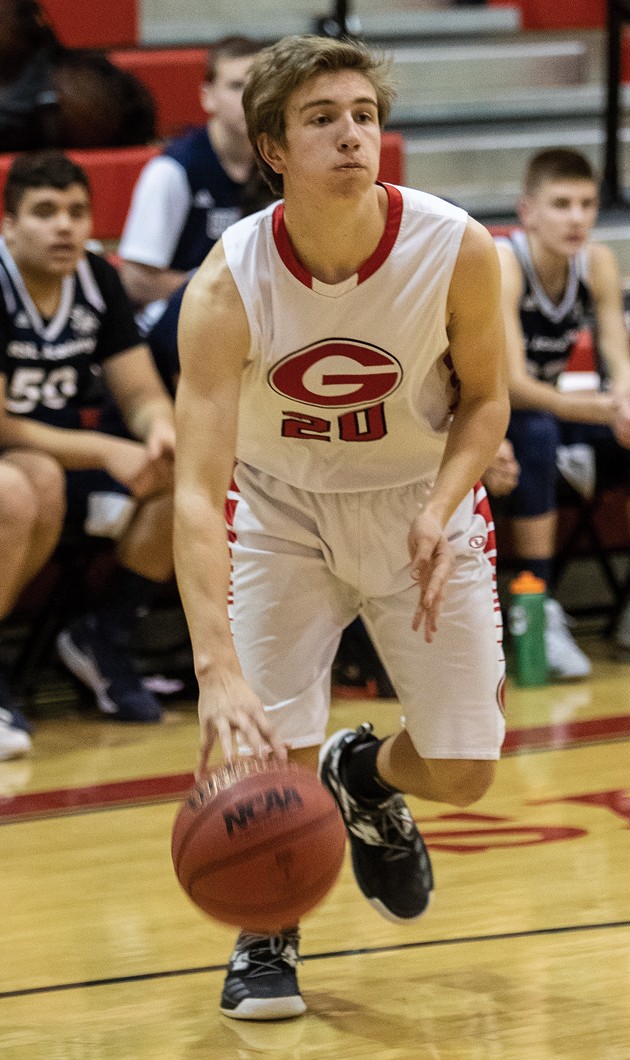 Grantsville’s Seth Beckett handles the ball during a game earlier this month against Real Salt Lake Academy at Grantsville High School. Beckett and the Cowboys suffered a 58-54 loss to Judge Memorial in a Region 13 home game Friday night.

Judge senior guard Mack Tarver had 11 points in the fourth quarter as the Bulldogs overcame a 13-point deficit to steal a win from Grantsville, 58-54 on Friday.

Judge Memorial led for 1 minute, 39 seconds of the game.

“I thought we were locked in pretty good defensively the whole night,” Grantsville head coach Bryan Detweiler said. “That was a battle. We fell just a little short.”

Grantsville led by seven to begin the final quarter.

The Cowboys didn’t score a field goal for more than three minutes between sophomore forward Davin Ekins’ layup with 1:14 to go in the third quarter and junior forward Ammon Bartley’s fast-break bucket with 5:47 left in the fourth. During that time, the Bulldogs went on a 9-4 run.

Tarver had a game-leading 18 points and put the Bulldogs on top with a driving layup to make it 53-52 with 1:31 to play — the first lead the visitors had since it was 2-0 a minute and a half after tipoff.

On the final play of the game, Grantsville freshman guard Carter Killian inbounded the ball from the baseline to senior forward Isaac Riding above the 3-point line. Riding moved away from the basket and picked up his dribble when his pass option was denied by the Bulldog defense.

As the play broke down, Beckett came to get the ball and heaved up a desperation 3-point attempt, which missed short. The Bulldogs claimed the rebound and time expired shortly after.

“It was just the little things,” Detweiler said. “Some things could have made our lives a lot easier — obviously shooting better from the foul line, or on a couple plays offensively, taking better care of the ball.”

The Cowboys were 15-of-30 from the free-throw line. Grantsville made two field goals in the fourth quarter as Judge outscored the region foe 23-12 in the final period.

Otherwise, Grantsville dominated the game and held Judge to single-digit scoring in each of the first two quarters en route to a 27-17 halftime lead.

Ekins gave the Cowboys their largest lead of the night with a slick move to get open in the post for a layup that made it 27-14 with less than a minute to go in the half.

Beckett led the Cowboys in scoring with 12 points. Riding and junior forward Jackson Sandberg each added 11.

Grantsville dropped to 0-3 in region play and will next face 0-3 Summit Academy at 7 p.m. on Wednesday on the road. Judge is now 2-1 in region and will face 3-0 Morgan on the road Wednesday.

“I think you’ve got to focus on what we’re doing well. The leaders on the team will carry them through and we’ll go back to work on Monday,” Detweiler said. “This one’s going to hurt tonight. It’s not easy. We’ll get them back together.”