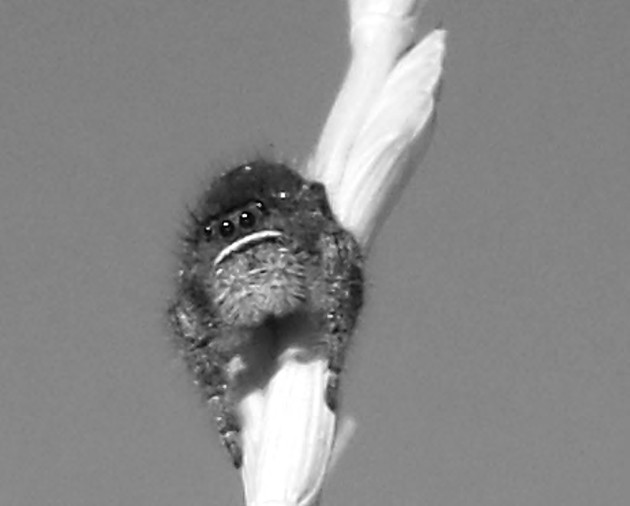 This jumping spider was found searching for prey on top of Settlement Canyon dam. Jumping spiders have superior eyesight and strong legs that are meant for hunting.

Unlike most successful hunting spiders, jumping spiders do not build webs, but are equipped with superior eyesight and strong legs that are meant for hunting. These spiders come from the Family of “Salticidae,” which is one of the biggest families of spiders, and their order is Araneae.

With the ability to track, walk both sideways and backwards, and pounce 40 times their own length, this makes it almost easy for them when it comes to finding food. Although jumping spiders don’t make webs for hunting, this doesn’t mean that they can’t make webs at all. They use their webs for wrapping their eggs. Once they’ve hatched, the offspring are guarded protectively by the mother until they venture off on their own.

In Tooele County, jumping spiders can be found just about everywhere. It may be tricky to locate them, but their habitats include deserts, forests, mountains and sagebrush areas.

The carnivorous jumping spider is most interesting because its bite is not fatal, although it may be very painful if you’re ever bitten. The best thing though about jumping spiders is that they are rarely found living indoors.

Addie T. Lindsay is 15 years old.  She is a writer and accomplished photographer of wildlife creatures, big and small.  Her Sioux Indian name is Hissing Viper. She can be reached at AddieTL@Live.com.