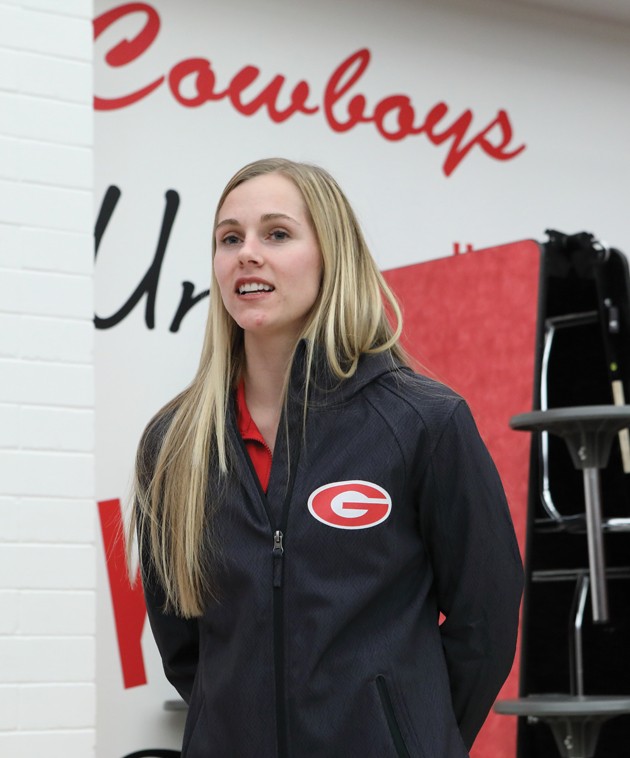 March 7, 2017
Junior college signings are a symbol of Vera’s success with Grantsville

The Grantsville girls basketball program has come a long way.

Before head coach Megan Vera took the helm for her first season, the Cowboys had a perfectly awful season, losing all 22 games.

When Vera got her first win — a 51-24 road victory over Layton Christian in the second game of the 2013-14 campaign — it ended a 55-game losing streak that spanned four separate seasons.

Butler, who started all four seasons as a Cowboy, signed her NJCAA Letter of Intent/Scholarship agreement to play for Utah State University Eastern alongside teammate Brayle Crosman, who signed on with Central Wyoming College.

And while I’m sure a state championship would have been the more-satisfying way to end an undefeated region championship and two-loss season, I think having two players sign on to play college ball is the perfect way to symbolize Grantsville’s success over the past four seasons.

“They’ve worked hard in the offseason,” Grantsville girls basketball head coach Megan Vera said. “They really focused on doing the little things that it took. Brayle bought into CrossFit, which really took her game to the next level. But I just want to say how proud I am of these two, and also their teammates, but it’s awesome to see them have this opportunity. And they’re just so deserving.”

In a lot of ways, Butler and Crosman will see something familiar in junior college. Neither of their chosen teams were particularly competitive last season, going a combined 21-40 overall and 9-28 in their respective conferences. It will be interesting to see how they respond to another opportunity to help a team climb out of the bottom of the standings.

“I’m really proud of them,” assistant coach Andrew Vera said. “I think that they’re a great example to all the girls that play sports here at Grantsville High School because they really are the type of girl that when coaches say something like ‘you want to reach your goal, you’ve got to do these things,’ instead of whining and crying about it, or figuring out ways around it, they just went to work. That’s why I think, their example, along with the other seniors and everybody else on our basketball team this year, we had such success because of that attitude that ‘I’m just going to work’ instead of wanting to be given things for no reason. They just earned everything, including these offers.”

The two senior signees have been greatly helped by power forward Rylie Ekins, who said she won’t play basketball at the next level, but will attend Southern Utah University on an academic scholarship. Ekins was second on the team in scoring with 12.3 points per game, just in between Butler and Crosman. She was third in rebounding, and the team’s leading blocker and 3-point shooter.

Grantsville’s success is unlikely to be localized to this season alone.

Next year, sophomore center Madison Fields will be given an opportunity to be a star in the low post after two seasons of riding the bench because of Butler’s success. Fields saw extended playing time at Stansbury when Butler was in foul trouble, scoring seven points and grabbing nine rebounds. She’ll play alongside small forward Hannah Butler, who has the ability to play from the perimeter but may be asked to move inside next season.

Freshman guard Ashlee Edwards was the first Cowboy off the bench this season. Her best game was a 10-point, 10-rebound double-double at home to Stansbury. She, along with starting point guard Paige McCluskey and soon-to-be sophomore guard Ellie Wilson, will be a force in the Cowboy back court, especially if shooting guard Kaylee Shores continues the success she saw late in the season against Tooele and Stansbury, games in which she scored a combined 17 points.

It will be interesting to see how the absence of this season’s successful seniors will affect next year’s team. It’s not likely the Cowboys will return to the days of going 0-22. At least not any time soon.

Tavin Stucki is a sports writer from Midvale, Utah, who has enjoyed watching the Grantsville girls basketball team climb out of the cellar. Follow him on Twitter @TooeleTAVscript and send any comments to tstucki@tooeletranscript.com.