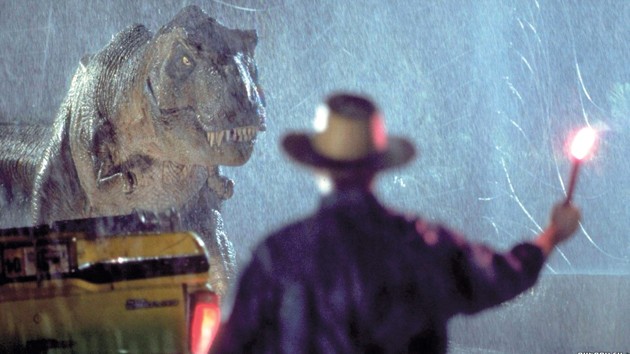 Twenty years after first dazzling and frightening audiences with shockingly realistic-looking dinosaurs, “Jurassic Park” is back — this time with depth.

The Steven Spielberg classic has been retroactively given the 3-D treatment to bring it up to modern technological capabilities. It’s not so it will make more money at all. No siree.

I think it’s a fairly safe assumption that nearly everyone has seen or at least is familiar with the plot of “Jurassic Park.” Gazillionaire builds a park and clones dinosaurs to fill it, then invites some scientists to take a preview tour to endorse it, but then things go horribly wrong. The dinosaurs escape and start hunting people in the park, which they never got a chance to do millions of years ago, but turn out to like quite a bit.

For being filmed long before 3-D was regarded as an acceptable gimmick to use besides for painfully campy movies, the conversion is successful. For the most part, the effect really just gives it more depth, kind of like watching the whole thing through one of those View-Masters with the slide disk (it could be just me, since I happened to have a View-Master with a Jurassic Park slide). There are some stand-out moments, though, where the 3-D is particularly effective. The T-Rex gets some, but most belong to the velociraptors, who seem like they’ve been waiting for 3-D all along.

Also surprising for the movie’s age was how well the effects have held up (though some of the technology, such as the UNIX computer system or the “incredible” new fossile-mapping program, have not so much). On occasion, the 3-D enhances dated moments, but on the whole, the dinosaurs, both computer-generated and robotic, still look pretty good, which is impressive in this age of CGI-happy filmmakers.

Another plus to hitting the theater to see a more glittery, not-available-on-home-video version of the show, was revisiting it in arguably the way it was meant to be seen — on the big screen. It tends to lose a certain something when you can just pause it on a 12-inch screen to go back to the kitchen for some more chips. I suddenly understood parts I had kind of zoned out before, and it made me remember what a great flick this is.

Obviously, “Jurassic Park 3D” is little more than a money-making ploy, but especially for fans of the film, it’s a good excuse to revisit one of the best movies of all time, as big and realistic as it was intended to be.

If there’s one thing “The Host” proves, it’s that a movie based on a confusing story by an iffy author can still be done well.

Screenwriter Andrew Niccol’s translation of Stephanie Meyer’s vampire-less novel is surprisingly clear, fluid and human, and his version is delivered neatly by Saoirse Ronan (“The Lovely Bones”) and Diane Kruger (“Inglourious Basterds”). And, for those still reeling from the abundance of glitter from the last movie based on one of Meyer’s books, virtually nothing sparkles in this one, so there’s that.

Melanie (Ronan, one of the last surviving true humans in a world filled with people who have been taken over by mind-controlling parasitic aliens (think “Animorphs” but with no animals and the Yeerks are nice and polite conquerers), is captured and infected with a soul called the Wanderer. Although most humans are no match for their alien captors, Melanie puts up a vicious fight against the Wanderer, and eventually convinces her to escape from the alien city and try to seek out other human survivors. Of those survivors, Melanie hopes to find her little brother and her boyfriend.

The survivors find them, nearly dead after days of wandering through the desert, and almost kill them. But Melanie’s uncle, Jeb (William Hurt), insists she be locked up instead of killed. While held prisoner, Melanie and Wanda, as the humans dub her, are almost killed several times, including at the hands of Melanie’s boyfriend, Jared (Max Irons), and Ian (Jake Abel). Melanie’s brother, Jamie (Chandler Canterbury), though, and Jeb both believe Melanie is still alive, and gradually Melanie/Wanda become integrated into human society.

Also gradually, Ian falls for Wanda, which causes problems with Jared, since Wanda is also Melanie. Stephanie Meyer just cannot write a story without a love triangle (except there are four people involved, but it’s not quite a square, so…quadrangle?). Meanwhile, one alien cop (Kruger), particularly driven to find and dispose of the Wanderer, begins to close in on the little holdout of humans.

Luckily, the story makes more sense onscreen. And Niccol, who also directs, makes a clean distinction between the sterile alien world and the grittier landscape of life for a human on the run. Much of the story is basically Melanie and Wanda talking to each other, in Melanie’s head, so it could easily look crazy, but no, it turns out OK. Ronan does a good job of clearly defining her two characters, and manages to build both into strong, sympathetic people.

I mean, “The Host” probably won’t be up for best picture at next year’s Academy Awards. It’s not quite that good. But as far as an entertaining sci-fi flick, you could definitely do worse.