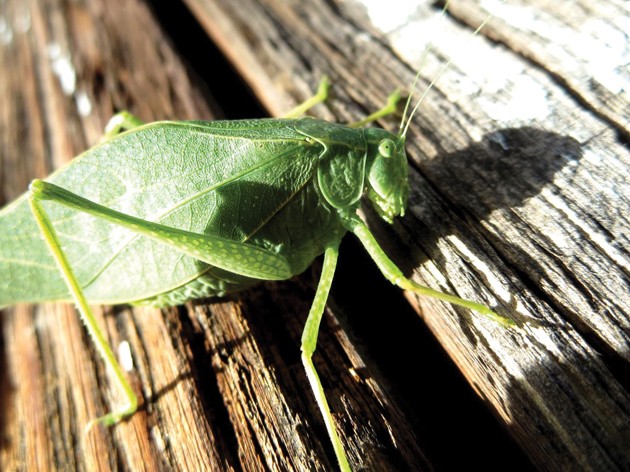 A katydid watches as it crosses a bridge and leaves unharmed.

Katydids, also known as “bush crickets” or “long-horned grasshoppers,” are insects that are most recognized for their leaf-like appearances and capabilities for camouflaging themselves amongst vegetation. Comprising more than 6,400 different species worldwide, katydids can vary in size from one to five inches, not including the additional length of their antennae. Sometimes katydid antennae can exceed 1 to 3 times their own body length.

Katydids are mostly found amongst trees, bushes, shrubbery or other leafy vegetation, and can be difficult to see, as most species are green-colored with occasional brown blotches or markings. Also, most katydids are nocturnal and only come out at night in order to avoid predators. Their defense mechanism resorts to biting, as katydids are capable of inflicting mellow or painful bites, sometimes capable of breaking the skin and drawing blood. However, katydids cannot sting, nor are their bites poisonous.

Katydids belong to the order of Orthoptera, which also comprises grasshoppers, crickets, lubber and locusts. Depending on the species, katydids are known to be herbivorous and feed on leaves, fruits, flowers, bark and seeds. However, many katydids are carnivorous, eating insects and other prey. In fact, some katydids are known to devour small snakes and lizards!

Katydids are more related to crickets than they are to grasshoppers. Most katydid species live to be a year old or less. Some species that live in the tropics can live to be several years old. Katydids can sing courtship calls and communicate with other katydids by singing and will do so by rubbing an organ on their wings called “via stridulation.” Most threats and predators to katydids include ants, birds, bats, wasps, spiders and praying mantises.