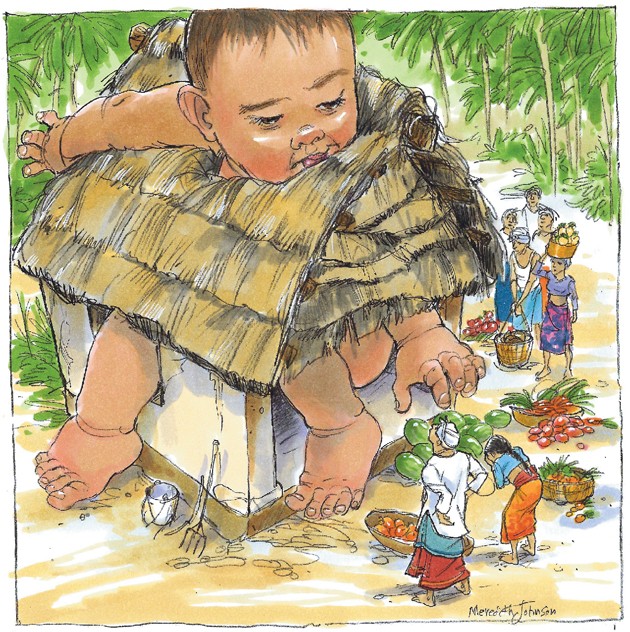 Once upon a time in Bali, one of the Indonesian islands, a wealthy man and his wife prayed long and hard to have a child. After many years, their prayers were finally answered. They had a baby boy.

But this was no ordinary child. From the moment he was born, the boy ate and drank without stopping. Not satisfied with just his mother’s milk, the boy would point to the food in her kitchen until she fed him freshly cooked white rice as well. His body grew bigger by the day.

By the time he was a teenager, he was as big as a buffalo, and people began to call him Kebo Iwa, or “Buffalo Uncle.”

As time passed, Kebo Iwa’s parents ran out of food, so the neighbors had to help support the growing teenager. Not only did the neighbors cook for him, they built him an enormous house when he could no longer fit inside his parents’ home. Soon even the neighbors started needing help feeding Kebo Iwa, so they called upon all the people of Bali to pitch in.

Kebo Iwa just kept growing until he was a young man. He became so strong that he could dig a well with his fists, and so he dug wells to protect his people from drought. He was kind-hearted and generous, too, and he kept his people safe. He could easily defeat anyone who challenged him or the people he loved.

News of Kebo Iwa’s strength naturally reached the king of Bali, and as he listened to the stories of this boy, he had an idea for how Kebo Iwa could help the Balinese people. You see, the king was very worried because Gajah Mada, who was the chief minister of the Majapahit Empire on the neighboring island of Java, swore an oath threatening to conquer all of Indonesia’s islands, including Bali. The king knew he had to do something to stop this.

The king thought Kebo Iwa might be the answer to his prayers, and so he invited the young man to the palace and explained the trouble. Kebo Iwa offered his services to help. He swore to the king he would never allow the Majapahit Empire to conquer Bali.

When Gajah Mada heard the tales of this giant and his strength, he sent his servants to meet with Kebo Iwa and invite him to the palace. Gajah Mada wanted the giant to meet his daughter, the princess of the Majapahit Empire. Kebo Iwa was intrigued and said he would go.

The Balinese king had his doubts about Gajah Mada’s sincerity, but he encouraged Kebo Iwa to go.

So Kebo Iwa traveled to the palace and met the beautiful princess. He was instantly smitten. Gajah Mada proposed that the two islands seek peace by uniting the giant Kebo Iwa with the princess in marriage.

Of course Kebo Iwa agreed to this.

Gajah Mada then told the giant that the empire needed his help building a well to save the Majapahit people from drought. Kebo Iwa agreed, of course, and so he began to dig.

But it was all a ruse. As Kebo Iwa was working, Gajah Mada sent a message to his army to surround the giant. Still, Kebo Iwa continued to work, ignoring the commotion surrounding him. When he was deep under the ground, Gajah Mada instructed his troops to bury Kebo Iwa with rocks.

“He shall be ruled by men who stink like cows for centuries!” Gajah Mada crowed as Kebo Iwa was being buried.

When Gajah Mada had received word that the giant was almost certainly dead, he called upon his troops to invade Kebo Iwa’s home of Bali.

Just at that moment, however, they all heard a rumbling sound. Suddenly, the rocks that had buried the giant thundered into the air.

With that, the troops attacked the mighty giant, and he fought with all his strength. “Give up, Kebo Iwa!” Gajah Mada cried. “I promise that we will unite all of Indonesia! We will honor Bali.”

Kebo Iwa ignored this and continued fighting for the Balinese people he had sworn to protect. After a while, he began to tire from defending himself from all the troops.

“The only thing that will weaken me,” Kebo Iwa finally admitted to the chief minister, “is limestone. If you smear my face with the powder of limestone, you may kill me.”

Gajah Mada was amazed to hear this revelation, so he ordered his troops to do just this. Kebo Iwa, his strength already sapped, couldn’t fight off the troops as they covered his face in limestone dust.

True to the giant’s words, he became weak, and he was defeated.

As he was dying, Kebo Iwa whispered, “Please bring peace and goodness to Bali, and please protect my people,” and Gajah Mada promised he would.

And he kept that promise as the islands of Indonesia came together in peace and goodwill.

The king of Bali felt relief knowing that Gajah Mada would no longer threaten his kingdom. He was proud of Kebo Iwa, who had kept his word and died protecting his people.

Today the people of Bali lovingly honor the memory of Kebo Iwa with a giant statue on the island. Legend has it that if enough offerings haven’t been made to the statue, you will hear a baby crying in the distance.