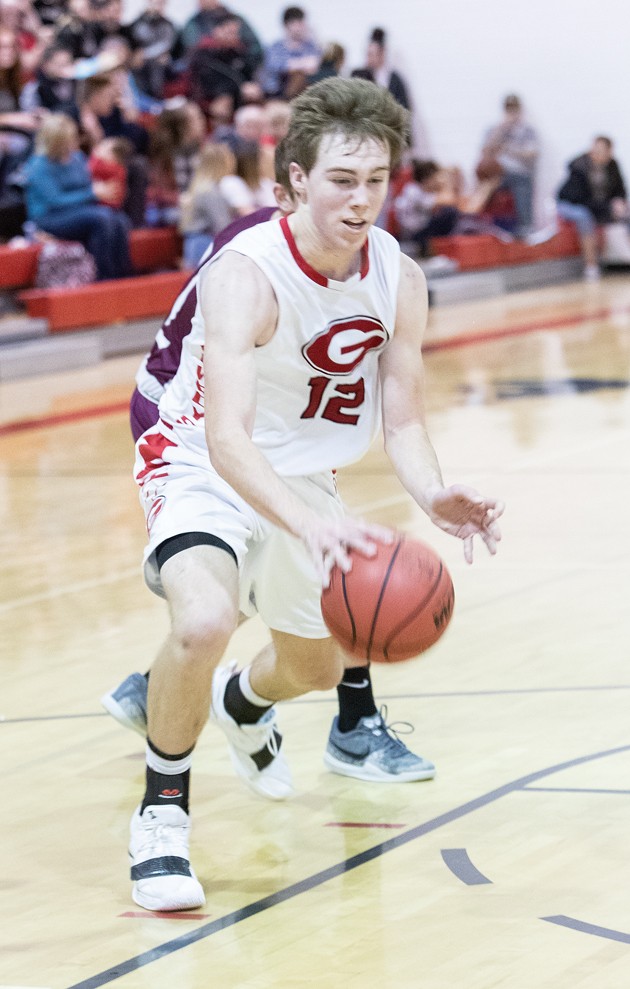 Grantsville’s Jackson Sandberg drives to the basket during a home game against Morgan earlier this month. Sandberg and the Cowboys rallied from a 16-3 first-quarter deficit to stun South Summit 39-38 on Friday night for their second Region 13 win of the season.

With 7.7 seconds left, Grantsville freshman Carter Killian received the inbounds pass, went baseline to baseline and scored through contact to give the Cowboys a 39-38 win over South Summit on Friday.

“I just had the ball in my hands at the right time,” Killian said. “To be honest, I don’t really know what happened — I just played basketball.”

The coast-to-coast game winner was the only field goal the Cowboys earned in the final five minutes, as South Summit went on a 7-2 run before Killian’s heroics.

With about five minutes left, Killian scored through another foul to give Grantsville its largest lead of the night at 35-31-capping off a 19-3 run that lasted more than 13 minutes in the second half.

“We don’t quit. We’re in it for the long haul,” Grantsville associate head coach Brandon Pehrson said. “It was frustrating in the first quarter. I knew the defense had to step up. It’s frustrating when you’re down like that so quick.”

Then in the second half, South Summit’s Logan Davis scored on a cut to the hoop that made it 30-17 with 6:54 to go in the third quarter. It was the last time a Wildcat player scored until guard Gabe Harry hit from range to make it 35-34 with 2:18 to go, sparking the late rally that nearly gave South Summit the win.

The Cowboys limited South Summit to 10 points in the second half.

It was the second time in as many games the Cowboys came back to win after being down by double digits.

Grantsville head coach Bryan Detweiler said he was pleased with the way his players were flying around on defense during the second half.

South Summit went 2-of-5 from the free-throw line in the fourth quarter. Wildcat guard Jared Dansie missed the front end of a one-and-one situation that could have given South Summit a three-point lead with 9.5 seconds left.

South Summit guard Jake Rydalch had a game-high 11 points, eight of which were scored in the first quarter on corner shots behind or near the 3-point line.

The Cowboys improved to 2-3 in region play and will next face Morgan on the road Friday.