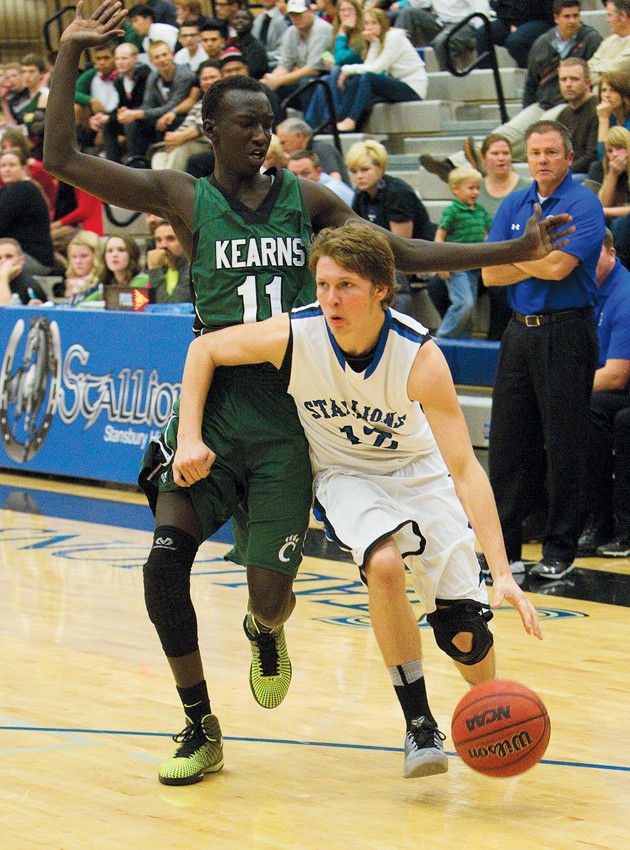 Stansbury junior guard Colton Christiansen, shown here against Kearns earlier this season, scored all of Stansbury’s seven points in the third quarter of the 71-60 loss to Northridge on Wednesday night. The Stallions also lost Tuesday to Westlake by a score of 65-45.

The Stansbury boys basketball team knows it is capable of competing against tough teams.

The Stallions just wish they could break through and beat one of them.

Stansbury hung tough for three and a half quarters, but ran out of gas late as the Stallions fell 71-60 to Northridge on Wednesday night in Layton, as the Knights pulled away with a 13-2 run in the middle of the fourth quarter.

“It’s disappointing,” Stansbury coach Rich Lakin said. “Summit Academy, Cottonwood and this one — they were winnable games. When you can win winnable games, it builds the confidence of the players. When you lose close ones like this, it makes coaching harder, because you’ve got to get them back up. We’ve got to keep our heads up and continue on.”

The Stallions (2-6) trailed by just six points after a basket by Gage Manzione with 5:30 left in the game. However, the Knights (3-4) got a bucket from Braxton Geislmayr on their next possession, and Manzione was whistled for an offensive foul that took away a potential basket for Stansbury. The Stallions’ bench was whistled for a technical foul as they protested the call, and Northridge stretched the lead to 17 points over the next minute and a half to put the game out of reach.

“As a whole, we played really well — it was just a couple little things,” said Stansbury senior guard Shane Andrus, who had eight points for the Stallions. “It was just a couple missed shots, a couple things we can do to get better. This one’s going to sting. We’re right there.”

For the second game in a row, Stansbury faced an opponent that wanted to play at a fast pace. The Stallions were up to the task, as sophomore Jase Wanlass had six points in the first quarter to keep Stansbury within five points despite Geislmayr’s 11-point effort.

The Knights increased their lead to nine points at halftime, draining five 3-pointers in the opening 16 minutes to grab a 32-23 advantage.

“We worked hard and we came back,” Lakin said. “They don’t quit.”

“Losing’s not fun — it’s never fun,” Andrus said. “But, we take the positives out of it. We’ve got a great coaching staff, and they help us to not hang our heads.”

Manzione led Stansbury with 18 points. Wanlass added 11 points off the bench. Dakota Fidler had five points, Alex Kimberling and Daniel Merritt had four each and Lindsley finished with three.

Dallas Moklebust and Alec Kohl each had 11 points in the win for Northridge, while Jrue Perkins added 10.

Stansbury will look to stop its two-game losing streak Friday at Rockwell.