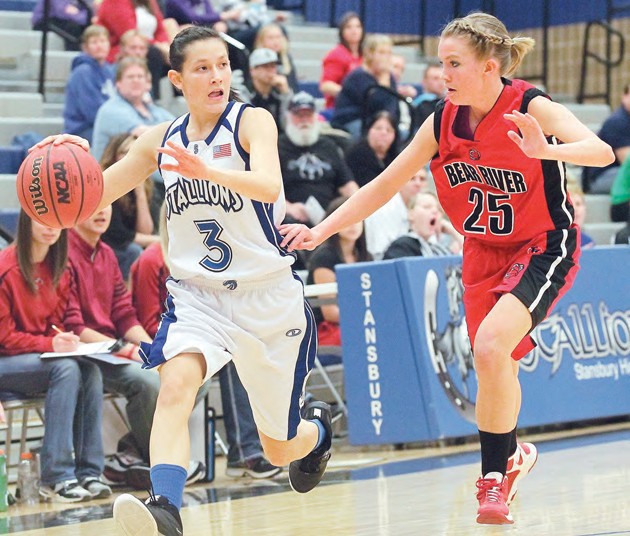 Stansbury High School senior Rebecca Lords (3) drives down the court against Bear River Thursday. Lords injured her knee in the fourth quarter of the overtime loss to the Bears.

Stansbury junior guard Madie Alvey found junior forward Bailey Wilson with two minutes remaining in overtime for a basket to give Stansbury a 56-54 lead, but it was followed by two missed free throws, an offensive foul and other missed shots to end the game, as the Bears finished off the Stallions for the win.

“We’ve just got to knock down shots,” Stansbury coach Kenzie Newton said. “Free throws at the end of the game were huge in that situation. We can go up 2 or 3 or even win the game in the fourth quarter if we make foul shots.”

Newton said she was pleased with her players getting to the free-throw line, but the next step is for her players to be confident and make those shots.

Both teams held sizeable leads in the fourth quarter. Stansbury led by 1 entering the final quarter of play and opened it with a 4-0 run. Bear River answered that run with its own 11-0 run to take a 50-44 lead. Stansbury senior center Karlee Manzione put an end to Bear River’s run with a bucket, and she was fouled. She missed the free throw, but then Wilson cut the lead to 50-48 after a Stansbury stop. Bear River answered with four minutes left to go up 52-48. Senior guard Erika Alvey then hoisted a shot from about 25 feet and missed.

Bear River answered to tie it up at 54 with under a minute left in the fourth quarter. Stansbury then had its best chance to win on the offensive side after the Bear River basket. After a missed shot, Manzione snatched a rebound and was fouled. But she lined up and missed both free throws. Adams snagged the rebound, but the Bears tied her up for a jump ball, the possession arrow belonging to the Bears. The clock expired to send the game to overtime.

“I think that we’re right there with Bear River, and I think they’re one of the better teams in our region,” Newton said. “We just focus on moving to Tooele next week. That’s who we’ve got next. We’ve just got to take it with a grain of salt. We did some things bad, but let’s work on them and improve. It’s the first game of region so there’s a lot more to be played.”

Stansbury had a scary moment in the fourth quarter when senior guard Rebecca Lords hit the floor after fouling Bear River’s Huber. Lords hurt her knee on the play and was carried off the court. She used crutches after the game with an ice pack taped to her knee. Her status for tonight’s game against Tooele is still questionable.

“That hurt us obviously,” Newton said. “She’s a great defensive player for us and … a leader for us out on the court. You hate to see that happen. Hopefully she’ll bounce back.”

Despite the loss, several Stallions contributed key performances to help push the game into overtime. Madie Alvey led the team on defense with four steals off the bench. She also poured in 8 points with three rebounds and two assists. Erika Alvey and Wilson both led the team in scoring with 16 points each. Wilson also led the team in rebounding alongside Adams with six rebounds each. Adams scored 6 points with two assists and a steal. Manzione scored 8 points with five rebounds. Junior center Danielle Dunn scored a bucket and grabbed three rebounds off the bench, and sophomore forward Kallie Steward hit a free throw and dished out an assist off the bench.

Region 11 play continues tonight as Stansbury and Tooele resume their cross-town rivalry at Stansbury. The game starts at 7 p.m.