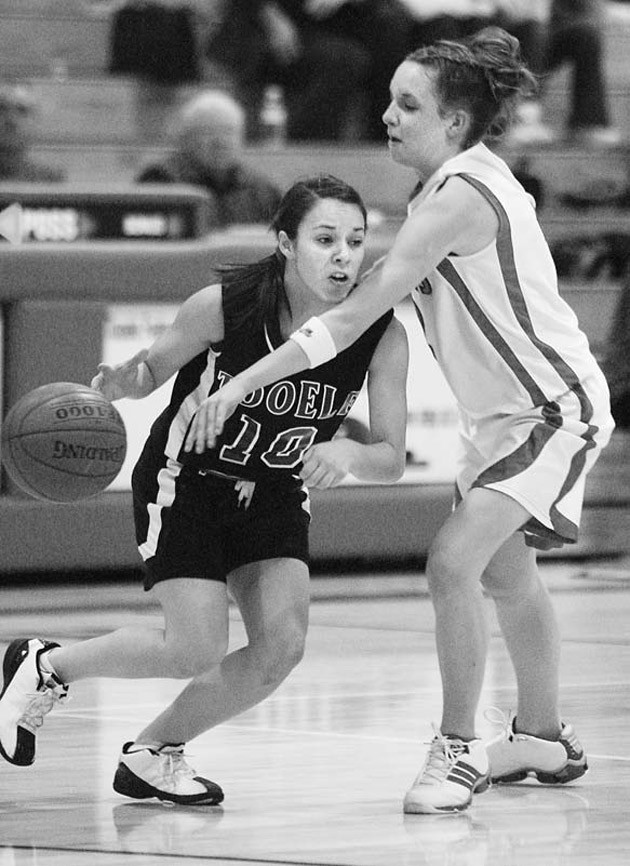 Tooele’s MeKenzi Pacheco (left) drives on Grantsville’s Emmi Nelson in a game earlier this winter. The Lady Buffs nearly pulled off a big upset with a hard fought contest against Ogden in the season finale. photography/Troy Boman

Tooele didn’t exactly get off to a positive start in the regular season finale Feb. 10 against Ogden. In fact, the Lady Buffs didn’t even score in the opening period and trailed by double figures just eight minutes into the Region 11 girls basketball affair.

However, Tooele showed its poise and determination to battle back and outscore Ogden 36-25 in the next three periods to force the contest into an extra session, deadlocked at 36-36.

But Ogden erupted for a 12-1 scoring surge in overtime to capture a 48-37 triumph over Tooele in girls basketball finale at THS.

Jaclyn Skanchy poured in a game high 16 and Cha Jung tossed in 12 to lead the way for the Lady Tigers.

Elva Banford pumped in 12 to spur the Lady Buffs’ attack and Megan Dunn hit for seven. MeKenzi Pacheco and Meredith Nigh contributed six each.

The loss ended the season for the Lady Buffs. Tooele finished the season with a 5- 14 overall mark in regular season play and 2-8 in league action.

Tooele Coach Karie Fredrickson said she was proud her team didn’t mail the final game of the season in after the Lady Tigers raced to a quick 11-0 lead eight minutes into the contest.

“Minus the first quarter, we played awesome,” she said. “We couldn’t do anything in the first quarter. Mentally, we just weren’t ready. The girls showed a lot of character to come back. They pulled it together in the second quarter and did everything right. It was nice to see everything come together and to see that they didn’t give up. In overtime, we came out flat again. Then we fouled a couple of our players out and that hurt us at the foul line.”

Og. 48 – Tooele 37 (OT) The Lady Tigers rallied for a 12- 1 barrage in the extra session to pull off a road triumph and earn the fourth and final playoff berth in post-season play Feb. 11 at Tooele High.

Ogden opened the game with an 11-0 assault in the opening stanza. Skanchy fueled the barrage with seven points in the first frame, including a 3-point bomb. Tooele bounced back with a 15- 5 outburst in the second stanza to cut the deficit to 16-15 by intermission. Megan Dunn triggered the Lady Buff comeback bid with five points in the period. Elva Banford chipped in with four, including a 3-point missile. Pacheco, Amy Petersen and Erin Christiansen contributed a field goal each to aid the rally.

The Lady Tigers could only muster three points from Jung and a basket from Brianne Daniels.

Ogden bounced right back with an 8-6 scoring edge in the third quarter to take a slim 24-21 cushion into the fourth period. Skanchy popped another 3-point shot while Jung and Shaylee Stegen hit a basket each.

Nigh produced all of the Lady Buff points on a pair of 3-point missiles in the quarter.

Tooele battled back down the stretch to produce a 15-13 outburst and knot the game up at 36-36 by the end of regulation play. Banford triggered the Lady Buff comeback with seven points in the quarter and Pacheco fired in another 3-point bomb. Petersen and Dunn chipped in with a basket each to force the game into an extra session.

The Lady Tigers managed six points from Jung in the fourth frame and a three-point play by Daniels.

But in the overtime period, Ogden took over with clutch free throw shooting. The Lady Tigers buried eight of nine charity tosses in the extra period to ice the pivotal league victory. Skanchy and Maren Crane recorded four points each in the overtime, while Jung and Stegen chipped in with two points each.

Pacheco hit a free throw for the lone points of overtime for Tooele.

The Lady Trojans raced to a 27- 4 lead after one quarter expired and rolled to a league triumph over the Lady Buffs Jan. 27 at Morgan.

Shannon Evans poured in 11 points, including a 3-point bomb, and Kendra Haslam flipped in six points to trigger the early assault.

Leslie Haddock also tossed in five points and Brittany McMillan flipped in a 3-point shot to spot the hosts a huge 23-point lead just eight minutes into the affair.

Amy Petersen and Nigh hit a field goal each to account for all of the Lady Buff point production in the first frame.

Morgan tacked on a 16-7 outburst in the second stanza to expand the margin to 43-11 at intermission.

Dunn sparked the Tooele offense with three points in the period while Thomas and Banford pumped in a field goal each. The Lady Trojans reeled off a 25-10 barrage in the third quarter to seize a whopping 68-21 advantage with one frame still left.

Nigh pumped in two 3-point missiles and Dunn added four points to complete the scoring for the Lady Buffs in the stanza. Morgan outscored Tooele 13-11 in the final frame of the game.

Banford and Dunn led the way for the visitors with four points each down the stretch and Thomas fired in a 3-point bomb as well.

Evans paved the way for the Lady Trojans with a team high 19 and McMillian fired in 17.

Dunn spurred the Lady Buffs attack with a team high 10 and Nigh tossed in eight. Banford also hit for six and Thomas contributed five.