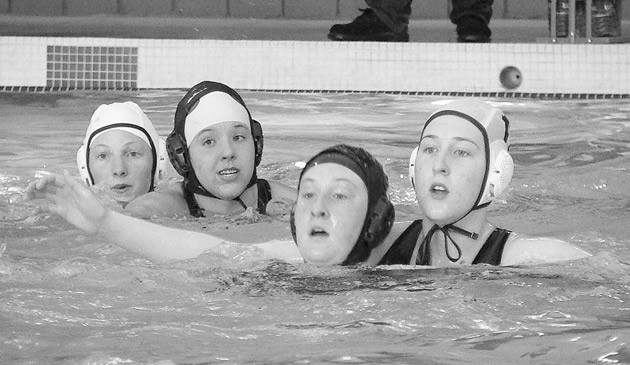 Oh what a difference a year makes.

Just ask any member, parent, or fan of Tooele Highs girls water polo teams after the Water Buffs finished 4-1 in the annual Cedar City tournament last weekend. Flip back the calendar one year and you’ll see Tooele with an 0-5 record and car loads of whipped players heading north on I-15 asking themselves, ‘Will we ever beat anybody’?

Enter the 2005 version of Coach Mike Wells polo crew and the Lady Buffs are murmuring, “We cant wait, til we get them at state”.

“Our girls continue to improve every game,” says Coach Wells. “We ran out of steam towards the end of the Cedar game, but I’m confident we can bounce back and get them at state.”

Throughout the pre-season Coach Wells has split playing time evenly among 13 players. In the Cedar tournament, he went with his six starters and goalie Laurie Halladay.

It was a chemistry adjustment during the first few games, but it appears the Buffs are ready to make a serious run for the state title in only their second season of water polo.

The tourneys two dominant teams entered the fifth and final game with perfect 4-0 records. Cedar prevailed when the hosts broke a 4-4 tie on a man-up goal with 3:23 remaining. The Redmen later followed with an insurance goal in the final quarter to ice the win.

In first period action, Trisha Cox vaulted Tooele to a 2-1 lead by drilling the net with a Jordan Marshall assist.

However, with left wing ace Robin Costomiris on the deck, the Lady Buffs were unable to keep pace with Cedar.

The loss left Tooele with a 9-3 record and in third place in Division II standings. They face West Jordan Monday at 3:30 at the Pratt Aquatic Center.

In a game featuring hot tempers, close calls and Trisha Cox’s bloody lip, the Water Buffs prevailed. Cox vaulted Tooele to an early first quarter lead when she fired a goal from 10 meters out over the tip of the goalie’s fingers.

Twenty seconds later, Chandra Yeaman fired a pass to Cox from the left corner and the fiesty junior moved her team up 2-zip. Bear River scored before Lauren Bridges sprinted free and fired the yellow sphere into the net to move Tooele ahead 3-1 in the first quarter.

Bridges found an open Cox who popped the back of the net to give Tooele a comfortable 4-1 halftime lead.

Danielle Frank closed the gap for Bear River 4-2 before Cox was ejected for fighting toward the end of the half.

In some respects, water polo resembles a parent separating two bickering children. You often catch the one retaliating – not the one who initiated the fight. Such was the case with Cox who reacted after being punched in the face by Bear River’s hole man.

Bridges, the Buffs Go-To Girl, scored both goals in the second half as a tight defense kept the Bears at bay.

Marshall, Allison Lee, and Robin Costomiris, and their press defense kept the Bears offense in check throughout most of the game.

Royle scored three goals in the victories and Jessica Mortensen whipped in her first goal of the season against Weber. Roberts also scored her first varsity goal against Weber.

“These games gave us an opportunity to give invaluable experience to our reserves while we rest some of our front-line players,” Coach Wells noted.

“All of our kids are dedicated and practice hard,” the coach added. “It’s great that we have some games that we are able to get all our players in the water and make significant contributions.”

The Buffs fell behind early but came roaring back late in the fourth quarter to hold off the Rabbits.

The one-two Lee-Cox punch kept Tooele on the heals of Delta throughout the first three periods.

Lauren Bridges knotted the game at 5-5 midway through the fourth with a backhand goal and then pushed the Buffs ahead for the win with an assist from Lee. Chandra Yeaman and Jordan Marshall neutralized the Rabbits’ offense in the waning minutes to preserve the win.