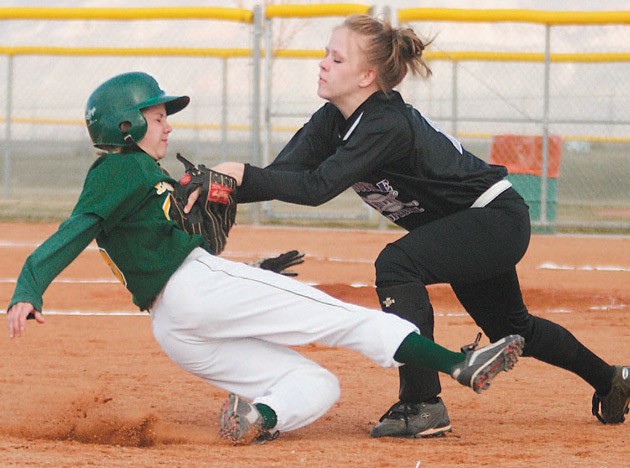 Tooele has tasted defeat just four times in over the past two seasons.

The Lady Buffs have posted a glossy 46-3 overall record en route to the past two Class 3A State softball titles and is off to another stellar start in 2005.

In fact, Tooele avenged two of their three losses a year ago when the Lady Buffs upended the Lady Bears twice in the Class 3A State tournament and just for good measure beat Bear River Saturday, 3-0 for the St. George-Warm-up High School girls softball tournament. And just three days later, the Lady Buffs had another perfect opportunity to avenge a loss from last year when Kearns came to the Deseret Peak Complex Tuesday for a preseason bout. Tooele needed a clutch two-run rally in the bottom of the sixth, thanks to a Amy Petersen single and two-run round trip blast by Cherise Herrera to vault the Lady Buffs to a thrilling and hard fought 2-1 triumph over the Lady Cougars. Tooele’s Lindsey Palmer and Kearn’s hurler Kara Bendt battled pitching wits throughout the contest and dominated the game from the mound. Palmer tossed a three-hitter and Bendt recorded a five-hitter.

Last year, Bendt led Kearns to a 3-1 triumph over Tooele on the Lady Cougars home field April 15. The Lady Buffs only lost three times on the season and logged a 21-3 overall record en route to their second consecutive state softball crown.

Now, Lone Peak is the lone team that the Lady Buffs have lost too that the team hasn’t avenged a loss in the past three seasons. The only reason was a 1-0 Lady Knight victory Friday and the Lady Buffs did not get a chance to meet them again over the weekend.

Now, Tooele is off to another sensational start with a 6-1 overall record on the season to date. Palmer also tossed a two-hit shutout and smacked out two hits at the plate to help lift Tooele to the hard fought 3-0 victory over the Lady Bears Saturday in the title game.

Herrera clubbed a clutch two-out run scoring double while Jessica Howsden, Kristen Evans and Kelsey Mendenhall scored a run each to vault the Buffs to the title triumph.

Tooele rolled to a decisive 10-0 victory over Provo in the tournament opener Friday, thanks to a perfect game by Palmer. The Buffs did lose a tough 1-0 decision to Lone Peak in pool play Friday but rebounded to post consecutive victories over Lehi (4-0) and Cedar City (4-1) to set the stage for the title game against the Bears Saturday in St. George.

The Lady Buffs venture to Mt. Pleasant Friday for a tough affair against the Lady Hawks at 3 p.m. and return home to host Payson Monday at 3:30 p.m. at Deseret Peak Complex. Tooele also opens Region 11 softball action Tuesday when the Lady Buffs host Ogden in a 3:30 p.m. affair.

Tooele Coach Barry Pitt said his team really battled a good pitcher and came out with a hard fought and quality win. “I felt really good about it,” he stated. “We came up against a really good pitcher. Lindsey and the other pitcher (Kara Bendt) are friends and they wanted to win it really bad. Both of them pitched really well. We didn’t hit the ball like I had hoped we would. But the girls stayed after it and never gave up and made it happen when they needed too.

It was a quality win in the fact that they are a top ranked team in Class 5A and they beat us last year. It was a good win for us.”

The Lady Buffs avenged a loss from a year ago to the Lady Cougars with a late rally in the bottom of the sixth to capture an impressive preseason triumph Tuesday at Deseret Peak Complex.

Lindsey Palmer and Kearn’s hurler Kara Bendt hooked up in an ole-fashioned pitcher’s duel. Palmer scattered three hits, struck out 14 and walked just two to earn the victory while Bendt tossed a five-hitter, struck out 12 and walked two in the loss.

Neither team really threatened to score until the later stages of the game.

Kearns broke out on top when Bendt crushed a shot to the left field fence and recorded a solo home run to build a 1-0 lead in the top of the fourth frame.

The Lady Cougars threatened to pad the advantage in the top of the fifth. Carlie Paul drew a leadoff walk, Kylee Green smacked a single and Ally Gertsch reached on a fielder’s choice to load the bases with no outs. However, Palmer reached back to strike out the ensuing slugger, get a line out in the infield and strike out another to leave the bases loaded with Cougar baserunners and keep the contest a 1-0 affair.

After stranding three baserunners throughout the game, Tooele finally capitalized on its biggest opportunity in the bottom of the sixth. Amy Petersen ripped a leadoff single and Cherise Herrera crushed a tworun round trip blast to produce the only runs Tooele and Palmer would need.

Palmer sat the Kearn’s line-up down in order in the top of the seventh to preserve the victory. Kelsey Mendenhall paced the Lady Buff attack with two hits on the game while Petersen, Herrera and Kristen Evans belted out one safety each.