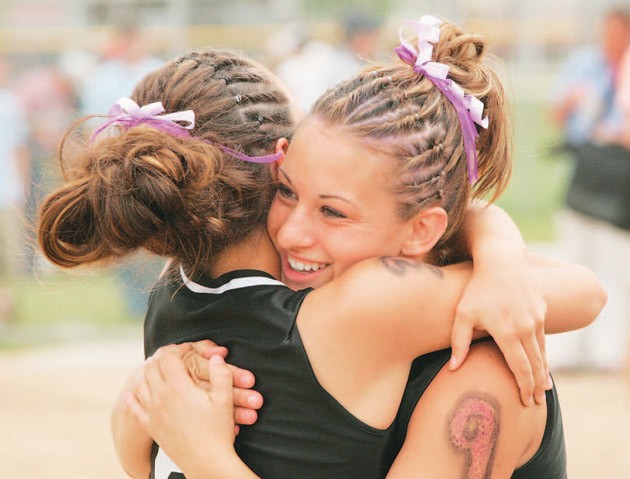 While many things changing, Tooele High softball proved that some things stay the same.

Lindsey Palmer tossed a two-hit shutout and smacked out two hits at the plate to help lift Tooele to the hard fought 3-0 victory over the Lady Bears in the title game.

Cherise Herrera clubbed a clutch two-out run scoring double, while Jessica Howsden, Kristen Evans and Kelsey Mendenhall scored a run each to vault the Buffs to the title triumph.

Tooele rolled to a decisive 10-0 victory over Provo in the tournament opener Friday, thanks to a perfect game by Palmer. The Buffs did lose a tough 1-0 decision to Lone Peak in pool play Friday but rebounded to post consecutive victories over Lehi (4-0) and Cedar City (4-1) to set the stage for the title game against the Bears Saturday in St. George.

The Lady Buffs host Kearns today at 3:30 p.m. at the Deseret Peak Complex. They will venture to Mt. Pleasant Friday for a tough affair against the Lady Hawks at 3 p.m.

Tooele Coach Barry Pitt said his young team really stepped up during the tough tournament competition over the weekend.

I think this year we had some better games in St. George than we have had in the past and I think that the teams were better. Our girls just stepped up and were a lot more focused for this early in the year and really played some good ball.”

The Lady Buffs erupted for three runs in the second stanza to pad a 2-0 cushion and scored in all but one inning to coast to an easy whitewash of the Lady Wildcats last Tuesday at Woods Cross.

Amy Petersen led off the game with a walk while Palmer and Howsden clubbed consecutive singles to open the scoring in the affair. Laci Sweeda smacked a RBI single later in the frame to spot the Lady Buffs a 2-0 cushion.

Leslie Brunson smacked a leadoff single and Amber Castagno reached on another Woods Cross error to open the doors for a second inning rally.

Petersen drew a walk to load the bases and Paige Lowry reached on a ’Cat miscue to push home Brunson. Palmer drew a walk and Howsden clubbed a two-run single to stake the Lady Buff lead to 5-0.

Brunson reached on a Woods Cross error in the third and later scored on a Castagno single to extend the margin to six runs. Palmer crushed a solo home run in the fourth to build a 7-0 advantage.

Tooele ended the game on the 10-run rule in the top of the sixth, thanks to some clutch and key hitting. Lowry belted a leadoff single and Evans drew a twoout walk to keep the rally alive.

Sweeda rapped a single to load the bases and Mendenhall ripped a two-run double to open the scoring.

Brunson also followed with a two-run single to complete the offense in the game and Tooele never looked back.

Palmer scattered two hits, both in the third inning, struck out nine and walked two to earn the triumph on the hill for the Buffs.

Petersen, Lowry, Palmer and Brunson all led the Lady Buffs with two hits each. Evans, Sweeda and Mendenhall slapped out one safety each.

The Lady Buffs exploded for seven runs in the first frame and cruised to the decisive triumph behind the perfect pitching of Palmer Friday in pool play and tournament opener at St. George.

Cherise Herrera set the stage for the impressive performance with a solo home run to open the game and Tooele never looked back. Palmer and Howsden drew consecutive walks while MeKenzi Pacheco and Mendenhall each reached on a Lady Bulldog miscue.

Evans drew a walk and Castagno drilled a two-run single to complete the early assault and stake the Lady Buffs to a quick 7-0 advantage after one inning.

Tooele tacked on three more tallies in the second stanza to build a double digit lead.

Howsden reached on a Provo error and Pacheco rapped a single. Mendenhall crushed a RBI double and Evans reached on a Lady Bulldog miscue to extend the Lady Buff lead to 10-0.

Palmer struck out eight of the 12 batters she faced in the game and popped out three more Lady Bulldog sluggers and had another ground out to record the perfect game.

Howsden, Pacheco and Mendenhall spurred the Lady Buffs with a pair of hits each while Herrera, Palmer, Evans and Castagno recorded one safety each.