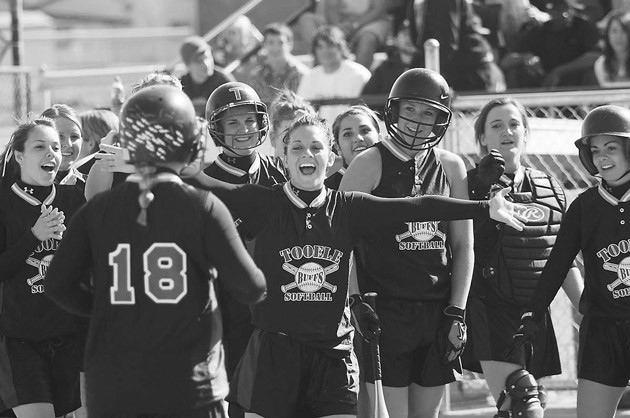 Tooele’s Kelsey Mendenhall (18) is greeted at home plate by teammates after the Lady Buff freshman crushed a two-run home run Tuesday at Grantsville. The Lady Buffs captured a 4-0 triumph over the Cowgirls in the game to remain in control of the Region 11 ranks headed into the second-half of league play. photography/Troy Boman

Tooele and Grantsville have some talented and solid softball teams during the 2005 softball season.

And since the two teams have competed in the same region ranks the past four seasons, the two perennial softball powers have produced some close and hard fought affairs.

When the two Tooele County teams met Tuesday at GHS, it was no exception.

In fact, there was only one frame where either teams scored runs and the two-time defending Class 3A State champs parlayed timely hitting into a four-run outburst and 4-0 Lady Buff triumph over the Cowgirls.

Kelsey Mendenhall crushed a tworun home run and pounded out three hits all together to ignite the Tooele triumph in league play. Winning hurler Lindsey Palmer also recorded a pair of hits and scattered four hits to seize the triumph on the hill for THS.

Katresha Veazie scattered eight hits and struck out 10 for the Cowgirls and also recorded one of the four safeties for the game by GHS.

Tooele also cruised to a decisive 19-1 victory over Ogden Wednesday on the Lady Tigers home diamond.

The Lady Buffs now head into a home battle with Morgan Friday at 3:30 p.m. at Deseret Peak Complex.

Tooele Coach Barry Pitt said his team came through with some timely hits to push home the lone runs of the game.

“It was a good game against Grantsville,” he said. “We had some good hits. I thought both pitchers threw well. We left a lot of people on base in the earlier innings. We just couldn’t come up with the hit to get our runners home. Finally, we got a couple of breaks and capitalized on them. It was a tough, hard fought win and gives us control of the league standings.”

Grantsville Coach Bridget Clinton said her team played well but made a couple of defensive miscues that allowed Tooele to get on the scoreboard and eventually win the game.

“It was a very close game and then in the 5th inning we had a couple of errors that proved to be very costly,” she noted. “You can’t commit errors against good teams and expect to come out on the winning end. Offensively, we couldn’t come up with the clutch hit when we needed too.”

The Lady Buffs rallied for a four runs in the fifth inning to take control and post a win over the Cowgirls Tuesday at GHS.

Jordan Chaney produced the first hit of the game in the bottom of the opening stanza for Grantsville but was left stranded.

In fact, Janese Veazie was the only other Cowgirl slugger to reach base, thanks to a walk in the third inning, bolted to second on a Monica Aagard sacrifice and Emmi Nelson ground out. But that was as close at the Cowgirl outfielder would come to scoring in the first five innings of the game.

Palmer sat down 15 of the first 17 Grantsville batters she faced in the tight affair.

Meanwhile, Katresha Veazie kept the Lady Buffs off the scoreboard as well.

Mendenhall did pound a leadoff double in the second stanza but was left stranded at the base when Veazie struck out the next three Lady Buff sluggers to keep the game scoreless.

But once again Veazie stranded the two Lady Buff runners in scoring position to keep the game a 0-0 tie after four frames of play.

Tooele broke into the scoring column in the top of the fifth and never looked back. Pacheco drew a walk and Herrera followed with a single to aid the effort. Kristen Evans belted an RBI single and Herrera darted home on a wild pitch as well. Mendenhall blasted a two-strike pitch into the right-center field gap and sprinted around the base paths to record the tworun clout and stake Tooele to a four-run lead.

The Lady Buffs attempted to pad the lead in the top of the sixth. Holly Pitt reached on a Cowgirl error and Karly Bitters drew a walk. Amy Petersen grounded into a force out and a strikeout ended the threat and kept the game a four-run affair.

Grantsville threatened to score in the bottom of the sixth when Emmi Nelson belted a one-out single and Chaney reached on a fielder’s choice. Katresha Veazie smacked a single to aid the rally but a strikeout ended the Cowgirl scoring opportunity.

Tooele also threatened to score in the top of the seventh when Palmer, Mendenhall and Holly Pitt rapped out hits with one out. But a ground out and strike out completed the rally.

Lauryl Baird smacked out a two-out single in the seventh but never advanced past first base before the game ended.

Mendenhall spurred the Lady Buffs attack with three hits, two RBI and a run scored while Palmer logged a pair of safeties as well.

Evans, Herrera and Pitt logged one hit each for the victors.

Katresha Veazie, Chaney, Nelson and Baird all recorded one safety each for the Cowgirls.