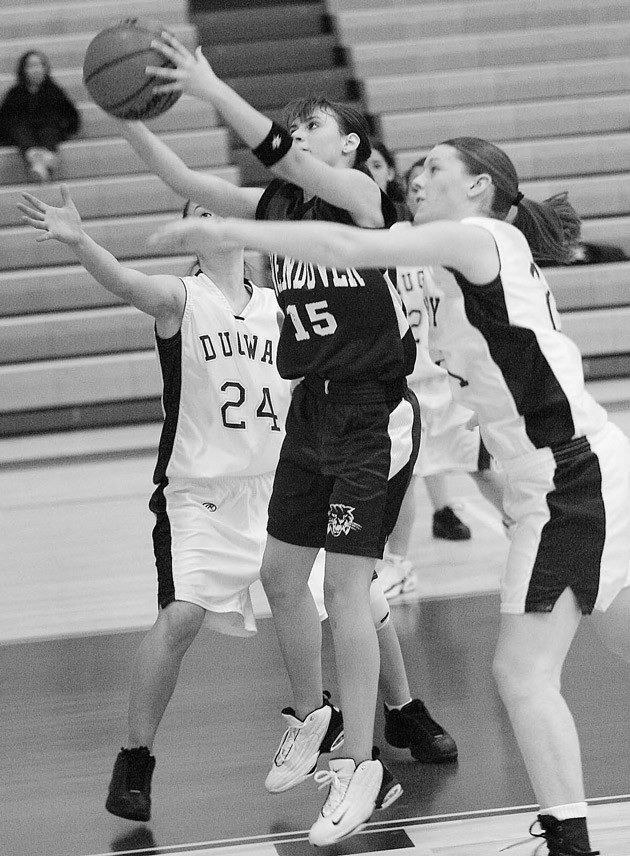 Wendover’s Tarin Ratliff (center) battles Dugway duo Samantha Deugan (left) and Mindy Shultz (right) for a rebound in a game earlier this season. The Lady Wildcats fell one victory short of the Class 1A State tournament, losing to Layton Christian in the playoff. photography/Mike Anderson

Wendover knew it would be a difficult task to upend league co-leader West Desert in Region 18 girls basketball action.

But it didn’t stop the Lady Wildcats from trying to upset the favored Lady Hawks.

And if it wasn’t for the dynamic sister duo of Chelsea and Jessie Allred, who knows what might have happened.

However, the Allred sisters ripped the nets for a combined 27 points to lead West Desert to a 33-22 triumph Feb. 1 in Wendover.

Chelsea poured in a game high 14 and sister Jessie hit for 13 as the siblings produced all but six of the Lady Hawk points for the affair. Kayla Timm also netted four for the victors.

Meanwhile, Lindsey Mascaro pumped in a team high eight and Rejily Sweat tossed in six to lead the way for the Lady ‘Cats. Krishton Gonzalez and Tarin Ratliff also contributed three each.

Jaynie Palmer poured in a game high 13 and Sherilyn Pianar hit for 10 to pave the way for the Lady Mustangs win.

Jasmine Wadsworth led the way for the Lady ‘Cats with a team high five while Fatima Gomez and Ashlee Bateman fired in four each for the hosts.

“We really played well,” he noted. “It was actually a closer game than the final score indicated.

We just couldn’t get some big shots to fall when we got close. But we fought them tooth-and-nail defensively.

The two Allred girls’ made the difference in the game. We played them tough and they didn’t get anything easy. It was a good game for us but we just couldn’t hit the big shots. I was really happy with the girls. They played their hearts out.”

A story on the Tintic season finale and playoff loss to Layton Christian will be published in a future edition.

The Lady Hawks outscored the Lady ‘Cats in all four frames but couldn’t quite put away the pesky home team Feb. 1 at Wendover.

The visiting Lady Hawks just edged past their hosts 8-7 in the second quarter scoring to build a slim 15-12 intermission cushion.

Chelsea Allred fired in a pair of baskets while Timm and Jessie Allred logged two points each to stake West Desert to the threepoint lead by the halftime break.

Sweat torched the nets for five points in the second stanza and Mascaro hit another field goal to keep the Lady ‘Cats within a shot of knotting the contest up at the break.

West Desert managed to earn a little breathing room in the third period with an 8-3 outburst to extend the margin to 23-15 with eight minutes still remaining in the game. Jessie Allred ignited the Lady Hawks offensive assault with six points and Chelsea Allred chipped in with a basket as well.

Fatima Gomez flipped in a field goal and Sweat canned a charity toss to account for all of the Wendover point production in the frame.

The Lady Hawks kept the heat on with a 10-7 scoring edge in the final frame of the game to seize the 11-point triumph. Chelsea Allred popped the nets for a pair of baskets while Timm, Jessie Allred and Tonya Hannebaum produced a field goal each as well.

Mascaro led the way for the ‘Cats with four points in the frame and Krishton Gonzalez fired in a 3-point bomb as well.

The Lady Lynx outscored the Lady Wildcats 16-10 in the final frame of the game to capture a battle of felines Dec. 10 at Salt Lake Lutheran.

Andrea Gonzales poured in six and Rejily Sweat hit a field goal to lead Wendover to a slim 8-6 cushion after one period expired.

Nikki Pang led the way for Salt Lake Lutheran with all six points for the team on three baskets.

Wendover registered an 11-6 outburst in the second stanza to take a 19-12 lead into the locker room at intermission during the non-league affair. Lindsay Mascaro popped the cords for seven points, including a 3-point bomb, while Sweat and Gonzales added two points each to build a seven-point lead at the halftime break.

Jeanine Whitney paced the Lady Lynx inAw the period with four points and Carly Barner added a field goal to keep the hosts within striking distance by intermission.

Salt Lake Lutheran outscored Wendover 17-14 in the third period to close the distance to within 33- 30 and eight minutes still remaining in the preseason affair. Pang led the way with seven points and Barner pumped in six. Shalimar Davis also buried a 3-point bomb and Sheena Burton provided a field goal to cut the Wildcat cushion to just three points headed down the stretch of the game.

Jennell Grossman paced the ‘Cats with six points and Mascaro tossed in four. Sweat and Gonzales also provided a field goal each to aid the effort and give Wendover a slim advantage headed into the final frame of the game.

However, the Lady Lynx caught fire in the fourth quarter with the 16-10 assault to pull out the close and hard fought contest. Barner, Courtney Hammett, Burton and Davis all recorded four points each in the session to ignite the Salt Lake Lutheran offense and pull out the non-league contest.

Gonzales and Grossman logged four points each and Mascaro buried a pair of free throws to give the Lady ‘Cats a chance to keep the game a one shot affair until the final buzzer.

Pang and Barner paved the way for the Lady Lynx with 12 points each while Davis hit for seven as well.

Gonzales and Mascaro paced the Lady Wildcats with a game high 13 points each and Grossman hit for 10. Sweat also hit for seven as well.

The Lady Eagles recorded a 22- 12 scoring advantage in the final two periods to erase a halftime deficit and pull out a preseason victory Dec. 9 at Wendover.

Both teams produced seven points each in the opening session to keep the game a tight affair with only eight minutes gone by. Gonzales hit for three while Mascaro and Sweat netted two each to force the 7-7 tie after one period.

Sasha Noel led the way for Layton Christian with five points, including a 3-point bomb, and Charisma McKinney added a field goal as well.

Wendover outscored Layton Christian 10-8 in the second stanza to take a slim 17-15 cushion into the locker room at intermission. Sweat and Grossman hit for three points each and Gonzales contributed a field goal to aid the effort.

Jasmine Wadsworth and Anna Martinez also hit a free throw. Noel spurred the Eagles bid for a victory with six points and McKinney chipped in with a field goal to keep the contest a one basket affair by the halftime break.

Noel ignited the Layton Christian comeback bid with six points in the third quarter as well to help the Lady Eagles record a 14-8 assault and take a 29-25 advantage into the fourth period. Wadsworth ignited the Lady ‘Cats attack with five points and Gonzales added a field goal.

The Lady Eagles logged a slim 8-4 outburst in the fourth quarter to complete the non-league triumph on the road. Noel put in a pair of baskets while Lawrence and Stephanie Robertson added a field goal each to stem the Lady Wildcats comeback bid.

Sweat accounted for all of the Wendover scoring in the fourth period with a pair of baskets.

Noel led all scorers in the affair with a game high 21 and McKinney added six for the Lady Eagles.

Sweat paced the Lady ‘Cats with a team high nine and Gonzales hit for seven. Wadsworth also hit for a season high six as well.