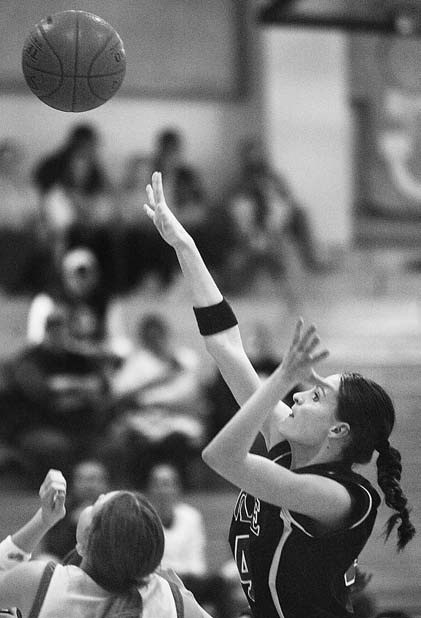 Tooele’s Megan Dunn fires up a shot over a Grantsville defender Feb. 8 at GHS. The Lady Buffs nearly pulled off an upset victory over Ogden last Thursday but fell in overtime. photography/Troy Boman

Dugway was living on the wild side down the stretch in Region 18 girls basketball action.

The Lady Mustangs recorded a pair of hard fought road victories last week at Tintic and Meridian to gain a share of the Region 18 girls basketball title with rival West Desert.

Jaynie Palmer fired in a lay up with eight seconds to lift Dugway to a thrilling 46-45 triumph Feb. 8 at Eureka.

The Lady Mustangs had to rally from 10 points down in the third quarter to pull out the tough road triumph.

Palmer poured in 14 points and Sherilyn Pianar provided 13 to lead the way to the pivotal victory. Mindy Shultz netted eight and Sam Beltzer contributed seven in the dramatic come-from-behind win. Shultz also recorded 17 rebounds, 12 of which were defensive, and Morgyn Broadhead stepped in for Tiara Stevenson, who was injured in JV, and played well for Dugway as well.

Just two days later, Dugway played another game close to the vest and had to battle to a difficult 47-43 victory over Meridian last Thursday in Provo.

Pianar poured in a game high 22 points and Palmer provided eight to lead the Lady Mustangs to the road triumph. Shultz and Beltzer also chipped in with six points each.

However, Dugway’s streak of playing close games with their rivals ended Wednesday when Piute handed the Region 18 co-champs a 55-26 setback in the opening round of the Class 1A State Girls Basketball tournament at Richfield High.