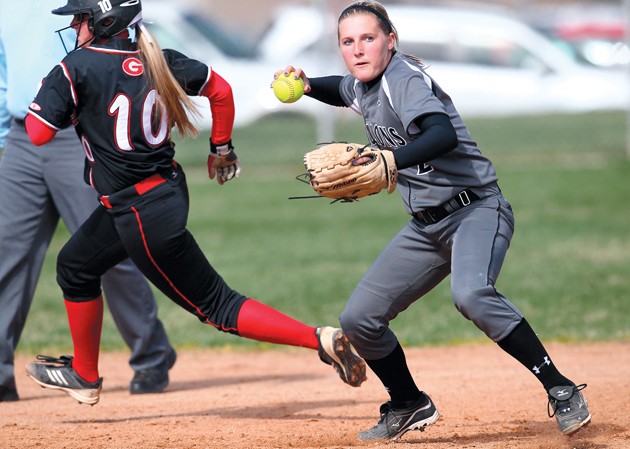 The Stallions remained unbeaten in Region 11 play with the win, and they extended their current winning streak to 11 games in a row.

“Kimbri pitched really good. She pitched strong innings,” Stansbury coach Bridget Clinton said. “She pretty much dominated [the Cowboys]. We just came out from the beginning of the game and hit the ball really hard. We picked up some great hits, some clutch hits and got ahead early in the game. If you get [Kimbri] a few runs, she’s pretty tough to hit. Defensively, we played great. They all played really well.”

Herring came in to the bottom of the first inning with a three-run lead secured under her belt thanks to the Stallions’ hitting in the top half of the inning. Junior Janessa “Cheetah” Bassett got on base with a lead-off single and immediately stole second base. After back-to-back pop outs, senior Karlee Manzione came up to the plate and delivered a base hit to score Bassett. Freshman Anjalee Batchelor followed that with a double to move Manzione to third. Finally, senior Jocelyn Kaufmann drove them both in with a base hit to make the score 3-0.

That put Herring into a comfort zone early on as she struck out the side in the bottom of the first.

“Her rise ball was working pretty good,” Clinton said. “The umpire had a pretty tight zone, so that pitch was working good. [The Cowboys] had a tough time hitting that.”

Clinton said Kaufmann’s work at catcher can’t go unnoticed. She said Kaufmann called an excellent game and put Herring in great situations, helping her get ahead in the count.

The Stallions kept adding pressure with two more runs scored in the second inning. Senior Lindsay Guymon drew a walk to open the inning, and sophomore Kilee Christiansen moved her over to second with a sacrifice bunt. Bassett slapped a triple to the right field gap on the following at-bat to score Guymon. Bassett then scored on a passed ball for a 5-0 lead.

Grantsville picked up its pace in the fifth inning, and it started with a highlight defensive play. Junior Jamie Hamby played in center field, and Kaufmann stepped into the plate with freshman Alyssa Guymon on second and Batchelor on first. After a wild pitch by sophomore pitcher Sydney Barney, the runners moved to second and third. Kaufmann blasted a ball deep to the left field gap, but Hamby sprinted toward the gap. She made the catch just in time and crashed into the fence. Alyssa Guymon delayed her tag-up opportunity, and it cost her. Hamby threw back into the infield, and then Alyssa Guymon took off from third base. Junior Kolbi Jo Meno easily applied the tag at home.

Senior Amy Matthews finally helped the Cowboys’ offense break through in the sixth inning. She belted a solo home run over the left-field fence to make the score 5-1. 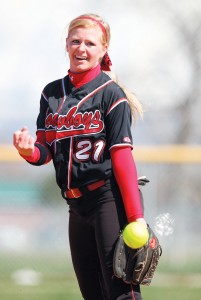 Grantsville coach Heidi Taylor said the team knows what it has to do, and it’s just a matter of getting those things done. She said Stansbury likes to jump on teams early, and her own team became another victim to this strategy.

“We need to start coming out to play,” she said. “We’ve talked about it, so it’s nothing we don’t already know. If we never make that adjustment, then we’ll never be the team to beat. Right now, Stansbury is doing a great job.”

Taylor said nothing surprised her about the Stallions. She said she knew what kind of talent they have, and that they can win in different ways.

Stansbury’s last run came in the top of the seventh inning after senior Katelyn Robinson got her first base hit of the game. She then stole second and advanced to third after an over throw. Batchelor hit a ball on the infield, and Robinson scored when the Grantsville fielders got Batchelor out at first.

Robinson was also part of a big defensive play in the bottom of the fifth. Meno hit a ball deep to left field that rolled toward the fence. GHS sophomore Bailey Critchlow rounded second and headed for third as Robinson scooped up the ball. Critchlow reached third and headed home when Robinson threw the ball back into Manzione at third, and then Manzione gunned her down at the plate. Kaufmann applied the tag at the plate to end that inning without giving up a run.

Stansbury hosts Morgan on Thursday at 3:30 p.m., although rain in the forecast could change that game. Grantsville hosts Ogden on Friday at 3:30 p.m.