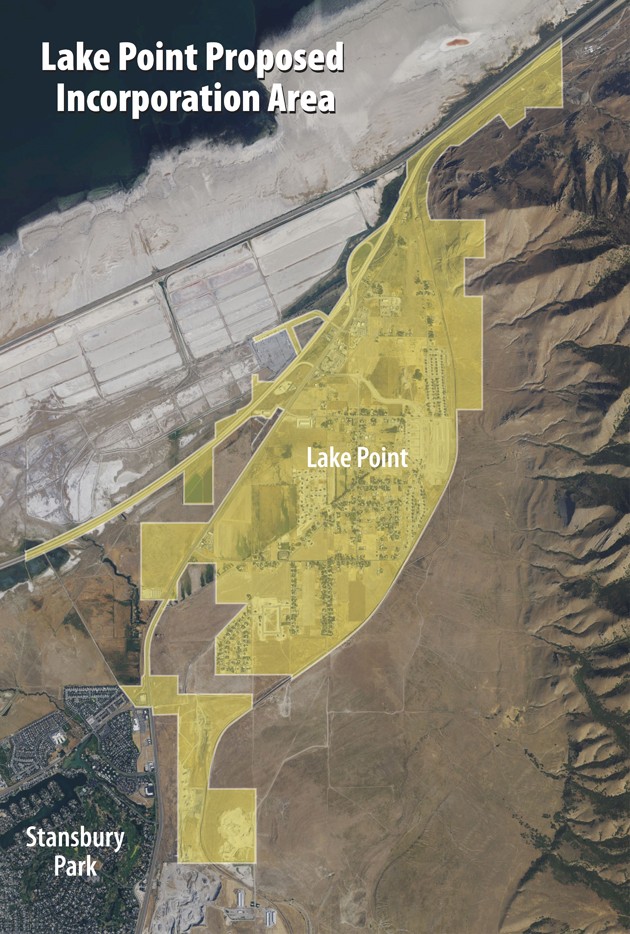 DISCLAIMER: This map is accurate as of the time of printing. For an up-to-date map of the proposed incorporation area of Lake Point, please visit voteinfo.utah.gov/lakepoin.

Five years after choosing not to incorporate, Lake Point voters will try again to become a city.

Lake Point petitioners were successful at meeting state code requirements to get the Lieutenant Governor’s Office to commission an incorporation feasibility study for Lake Point City.

Two public hearings were held online by the Lieutenant Governor’s office for the proposed Lake Point incorporation with the feasibility study consultant, Zions Bank Public Finance, presenting their findings. Those public meetings were held April 13 and 20.

The petition sponsors have now been successful at gathering enough signatures, prompting the Lieutenant Governor to ask the Tooele County Clerk to place the incorporation of Lake Point on the November 2021 ballot.

The study assumed maintaining the current level of services and a property tax rate for the new city that is equal to the current rate Lake Point residents pay to the county for municipal type services, according to Susie Becker, ZBPF vice president.

“That keeps everything equal, so there shouldn’t be an impact on your pocket books,” Becker said.

Most new cities don’t start up with a new police or road department in their first year, according to Becker. So Becker asked Grantsville and Tooele cities and Tooele County to propose costs for contracting these services to Lake Point City. Only Tooele County responded with non-binding bids.

The net surplus revenue increases each year, reaching $186,781 by the fifth year, according to the study.

Demographically, Lake Point City would have an initial population of 2,511. The population is expected to grow to 4,832 in 2025.

Lake Point City would have roughly the same population as Fillmore, Garland and Monroe.

The city would have 631 households with an average of 4.1 residents per household and cover 4.6 square miles.

Becker said that the incorporation of Lake Point may have some risks in the case of an economic downturn not included in the study.

On a positive note, Becker said that it may be possible for the city to negotiate a better rate for garbage services, new residential developments may attract more commercial development to help with property tax and sales tax, and there are surrounding areas that could be considered for future annexation after incorporation.

Additional information on the incorporation of Lake Point, including the complete feasibility study, can be found at voteinfo.utah.gov/lakepoint.