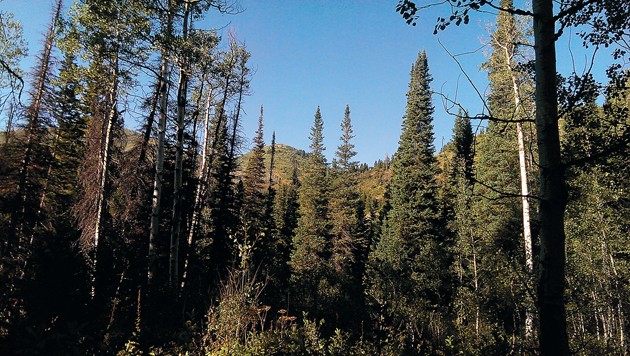 Spruces Campground in Big Cottonwood Canyon teems with tall spruce trees, some of which can be several hundred years old.

September 10, 2015
Last campout of summer is always a special time to share

It’s hard to believe that summer is nearly over, but we feel the evidence in the chill of each morning now. One thing my family likes to do each year before the snow flies is a good, late summer campout. Most people accomplish this on Labor Day weekend, but it’s not too late to recharge your spirit in the great outdoors.

This past Labor Day, we chose the Spruces Campground in Big Cottonwood Canyon for our annual family gathering. This site couldn’t be in a better setting: the campsites are situated along the canyon bottom near the creek in a grove of giant blue spruce trees. The creek here breaks into several smaller channels as it spreads out in the wide canyon bottom.

Each one of these channels has water tumbling over rocks and logs, with deep pools here and there. Fallen logs and boulders in the stream provide routes for crossing and it is great fun to go exploring through this area.

The blue spruce trees that the area is named for are beautiful with their silvery blue foliage and often perfect conical shape. They can grow up to 150 feet high and live up to 600 years. You will typically find an abundance of papery, 3-inch cones littering the ground beneath these giants. When you gather a bunch of cones and feed them into the fire one at a time, they provide a good coal bed and are pretty as they burn because the cone petals flare an almost metallic red in the fire.

The first order of the day when camping is to get the tents or trailers set up. This proved to be quite a task since my parents brought a camp trailer and none of us understand how to back a trailer into a campsite. Luckily, a nice gentleman took time out of his campout to help us back the trailer in and get it stabilized. I’m always thankful when I run into good people who are willing to help you out and expect nothing for it in return.

After the camper was set and stabilized, I got busy setting up our large 8-man tent in a great spot near the fire pit under some spruce trees. This tent can be sectioned off into private areas and my daughter thought she was so cool because she had her own part of the tent with its private entrance. The spruce trees offered good protection from the rain, but the downside was the platoon of squirrels that were upset we had set up shop in the middle of their terrain.

There was constant chatter from the limbs of the trees. They would click their tongues against their teeth rapidly in a loud chatter that was annoying. You can readily see where the squirrels have been at work because they throw pine cones down from the upper boughs of the trees and then collect them from the ground. Next, they find the perfect branch and then commence to chomp the cones to bits for the seeds.

After the tent is all set up, it’s time to build the fire. Growing up as a Boy Scout with my dad as the Scoutmaster, the pressure was on to build a one-match fire. I first found two logs and put them about 6 inches apart in the fire pit. By spacing the logs and piling fuel across the top, leaving a void underneath, you allow ventilation that provides oxygen to the fire — a key element of the fire triangle.

Next, I found some old, reddish-brown, dead spruce needles and tiny dried-out spruce twigs. I put the branch of dead needles down, first between the logs, and then laid the tiny twigs across the top of the logs. Next, I took some larger twigs and sticks and carefully positioned all of these pieces of wood so the structure wouldn’t collapse.

Once prepared, I took out the match, struck it and held it steadily under the pine needle tinder. The match spread flames throughout the structure of my fire and my reputation was safe for another season.

Some people like to use paper or other unnatural things to start the fire, but every time I get a chance to practice this vital skill, I like to use only things that are found in the forest and desert. If you take a good 20 minutes to properly and thoughtfully prepare your fire, you should meet with success every time — unless it’s raining.

After the fire was lit, the camp chairs and coolers came out and my wife busied herself with preparing our dinner while I took my daughter and cousins exploring for firewood across the creek. We found a giant deadfall that had what seemed to be an endless supply of thick, long, bleached branches and brought back what we thought would be enough fuel for the fire that night. Funny how your estimations are never correct and you find yourself rummaging for more wood in the wee hours.

Our family often prepares what we call tinfoil dinners. You simply pre-cook anything you want: chicken, beef etc., with a bunch of potatoes and vegetables, season it all and then wrap it in several layers of tinfoil. Let a portion of the fire burn down to coals and lay these tinfoil packages directly on the coals. After a short while you turn them over, and when you hear sizzling in the package, you know they’re done.

It was dark now and the entire family was present around the fire. People roasted hot dogs and marshmallows and made s’mores. My dad got out his old guitar and led the family in some of our traditional songs, such as “My gal’s a corker” and “Shouting out the battle cry of freedom.” We then exchanged gifts for birthdays that had occurred over the summer and made small talk around the fire, enjoying the outdoors and each other’s company.

At one point, I told everyone to stop talking and look straight up. The firelight danced off of black spruce and the smoke trailed up to a starlit sky that seemed as though someone had scattered the clearest diamonds across a black velvet cloth. After that, the festivities wound down and people started clearing off to their own camp areas until there were just a handful of kids left.

That is when the ghost stories began. One word of advice: unless you want all the kids in your tent, don’t tell ghost stories. Needless to say, they crammed in our tent and we all feel asleep watching John Wayne’s “Rio Bravo” on a laptop computer while listening to the sounds of the creek.

The next morning was cold, crisp and clear. We got up early and cooked bacon and eggs over the fire and warmed a pot of water for coffee. During the day we played games and hid out in tents and under canopies as a midafternoon storm poured heavy rain and hail down on everything. We then went on a short hike and my dad and I listened to Brigham Young University beat Nebraska on a 50-yard Hail Mary pass on the radio.

Family camps in our Utah mountains like the one I have described are events that will never be forgotten. I will always look back on these camps with fond memories and look forward to the next one.

How to get there: Drive up Big Cottonwood Canyon about 9 miles and you will see signs on the right side of the road. These are fee campgrounds because they have fire pits, tables, restrooms and water spigots. There are many other great campgrounds in the Wasatch National Forest, but they are popular. If you are planning a camp, you need to make reservations up to a year in advance if you want your perfect spot. For more information, call the Salt Lake Ranger District at 801-733-2660.