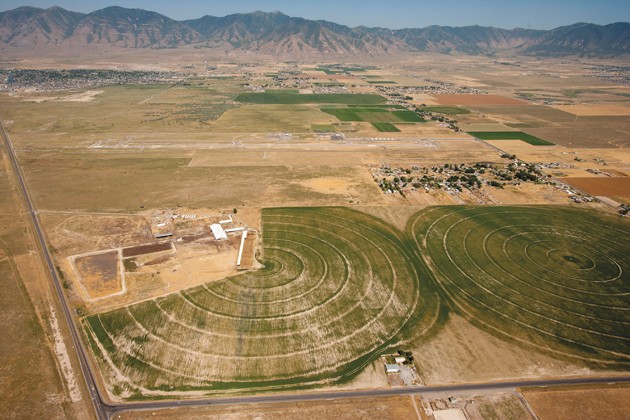 An aerial view shows the proposed area for the Skywalk PUD near the Erda Airport, Highway 138 and Golden Gardens.

The 3rd District Court in Tooele will continue to hear challenges to two planned unit developments in Erda and the Skywalk development.

A request from Tooele County to dismiss a lawsuit challenging the approval of Tealby Village and Erda Estates was denied in an oral ruling from the bench on Sept. 16 by 3rd District Court Judge Dianna Gibson.

Gibson also denied a request by Tooele County to dismiss a second lawsuit that asks the court to declare the referendum challenging the rezone for the Skywalk development to be legally sufficient and to place it on the ballot.

The Erda Estates PUD is on 156 acres near the intersection of Erda Way and SR-36.

Currently zoned RR-5, the Erda Estates PUD proposes 225 12,000-square-foot-lots, 100 multi-unit residences on 17.55 acres and three farm loats of 14,500 acres, according to the petition for judicial review of the land use decision filed by the Erda Community Association.

The Tealby Village PUD is on 44 acres near the intersection of Erda Way and state Route 36 and surrounds the Thompson Smokehouse. It is also currently zoned RR-5. The PUD proposes 74 residential lots on 21 acres in varying lot sizes, according to the petition.

The County Planning Commission approved the concept plan for the two planned unit development-conditional use permits in December 2019.

A group of 125 Erda citizens appealed the approval of the concept plan to the Tooele County Commission, which denied the appeal in February 2021.

The Erda Community Association, under Utah state law, then filed a petition for judicial review of the land use decision.

In their petition, attorneys for the Erda Community Association allege the PUD-CUP approvals were an illegal act because the process and approval violated county code and state law.

The petition alleges that the PUD-CUP applications were not complete, the approval occurred within one year of a final determination for land use on the same property, a mandatory pre-application conference was not held, public notice was improper and did not include information for review, the hearing notice was worded to discourage public comment, the chairman of the planning commission inappropriately limited public comment, and county code requirements for authorizing a conditional use permit were not followed.

Tooele County asked the court to dismiss the lawsuit by Erda Community Association because, as required by state law, the community association was not a party to the administrative appeal to the County Commission.

The association argued that the Court should find this to be an exception to that rule. The Court agreed with the association.

In addition the complaint claims that restrictions on signature gathering caused by COVID-19 and the governor’s refusal to allow electronic signatures placed an unconstitutional burden on their right to access the ballot.

In a ruling dated Sept. 20, 2021, Gibson agreed to dismiss Marilyn Gillette, who was the Tooele County Clerk at the time, as respondent in the lawsuit.

However, Gibson allowed the challenge to the number of signatures required for the referendum to proceed.