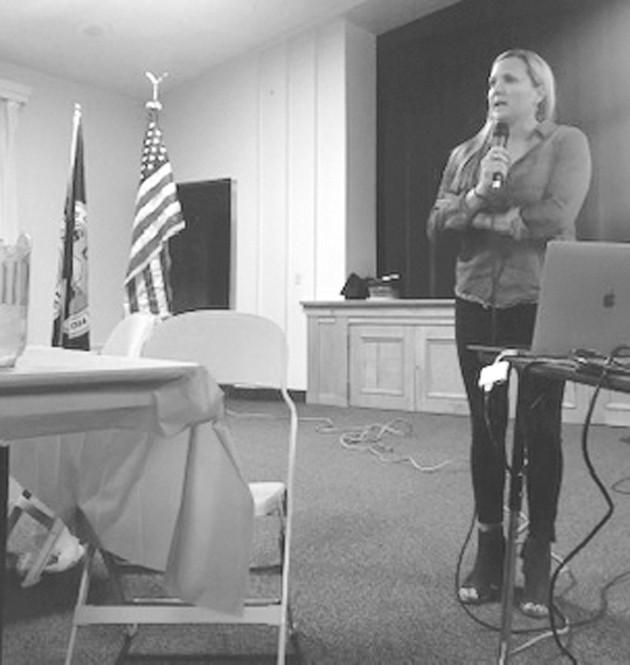 When Christina Torriente-Robey first stuck her toe into the waters of religious films, she never envisioned the journey of joy that would soon follow.

Torriente-Robey addressed 50 members and guests of the Settlement Canyon Chapter of the Sons of Utah Pioneers on May 2.

She shared a handful of memorable moments from her 10 years as a producer, director, and actress for The Church of Jesus Christ of Latter-day Saints film productions.

Acting was perhaps the furthest profession from her mind when she started on a career path as a single mother. She later discovered “a burning desire in my heart to tell stories through film.”

She told the gathering, “I have seen the hand of the Lord over and over again in my experiences acting, producing and directing.”

During her 10 years of religious film work, Torriente-Robey has jumped among those disciplines as smoothly as a skilled athlete playing multiple positions.

While she may be best known for her acting in “The Cokeville Miracle,” “Ephraim’s Rescue” and “The Writer’s Block,” Torriente-Robey extends her talents working on projects for Mormon Messages, seminary and institutes, church history, and public affairs with the church.

While playing a role crossing a rapid river in “Ephraim’s Rescue,” Torriente-Robey felt the tangible fear of drowning.

“Ephraim’s Rescue” is a religious historical drama based on the true story of Ephraim Hanks who was called to rescue the people of the Martin Handcart Company.

Although she was a strong, experienced swimmer, in one scene she found herself in a precarious and life-threatening situation that could have swept her to death.

She shared other stories from her personal and professional life where she overcame what at first seemed insurmountable trials.

“There is so much hope to be found in the midst of trials,” she said.

Torriente-Robey also expressed her appreciation to the volunteers of the SUP chapter, who work tirelessly on museums, monuments and other projects.

“I have a special appreciation for your diligent work in preserving the history of those who came before us,” she told chapter members and their guests.

The local chapter of the Sons of Utah Pioneers meets monthly on the first Thursday at the Tooele 4th Ward building, 200 S. 200 West, Tooele.