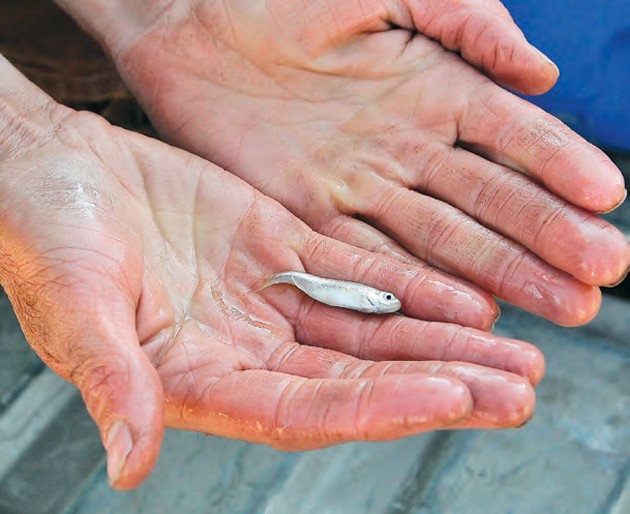 Zane Olsen, Division of Wildlife Resources Whawheap Hatcher manager, shows a least chub before planting 500 of the fish into a reservoir at Deseret Chemical Weapons Depot Oct. 26, 2011. Thanks to an effort by the DWR and DCD, the least chub have thrived.

A refuge population of least chub stocked in a pond at Deseret Chemical Depot is thriving.

Through an agreement between the Utah Division of Wildlife Resources and DCD, 500 least chub were stocked there in late 2011 to augment the fish’s wild population and prevent its listing under the Endangered Species Act.

The least chub, a minnow that only gets as big as two and a half inches, eats small invertebrates, including mosquito larvae and algae. Least chub mature fairly quickly; their life span is only about four to five years. They usually breed by their first or second year, though reproductive maturity is dependent more on growth than time. The fish are only found in Utah’s Bonneville Basin. The decline of least chub can be attributed to several factors. Their habitat was already limited in Utah because the state is the second-driest in the U.S. But groundwater decline due to changes in land-use practices is considered a major cause.

“They went from being very common in the Lake Bonneville days, but now are only found in six locations in the Bonneville Basin,” said Mark Grover, a DWR native aquatics biologist. “The species is about four million years old.”

Three of the least chub locations are located in the Snake Valley in Millard and Juab counties. Another is in Clear Lake, which is in Millard County, and there is also one in Juab County on the southeast side in Mills Valley.

The sixth population is located in Mona Springs near Mona. Grover said one of the DWR’s major objectives is to create two refuge populations for each of the six natural populations.

The least chub is currently a candidate species for listing under the Endangered Species Act. The U.S. Fish and Wildlife Service has determined that the fish’s listing as threatened or endangered is warranted but precluded because of higher priorities.

However, the fish’s listing will be reviewed once again in April. Grover said he has high hopes that because of the fish’s population growth at DCD, it won’t be listed. “The new refuge population at Deseret Chemical Depot in Tooele County is doing great — much better than we could have hoped for,” he said. “We checked on the status of the population on Aug. 2, 2012. We set 15 minnow traps in the two refuge ponds to capture and measure a sample of least chub.”

Grover said they captured 800 least chub in 10 traps set in the northeast pond, where the original 500 least chub had been stocked. Of the 800 individuals captured, 689 were juveniles produced during the summer of 2012.

“There were 74 additional juveniles in five traps that we set in the southwest pond,” he said. “We had not stocked this pond, so these were juveniles that had migrated down the channel from the northeast pond and colonized the southwest pond on their own.”

Grover said the results of the monitoring survey were so encouraging that the DWR is already considering the possibility of using the refuge population at DCD as a future source of least chub to supplement the Mona Springs population in Juab County, which has dramatically declined since 1995.

“Less than one percent of fish we catch are least chub,” he said. “Close to 98 percent that we catch are non-native species.”

Some of those non-native species, such as the Western mosquito fish, are a serious threat to least chub. Grover said they were introduced to control mosquitoes, but are extremely aggressive and have displaced the least chub. “We are planning on conducting a second monitoring survey at Deseret Chemical Depot during August or September of 2013 to assess the level of reproductive output during the summer of 2013,” he said. “We’ll be especially interested in how the least chub are doing in the recently colonized southwest pond.”

Overall, Grover hopes the DWR’s efforts to improve the least chub’s future will pay off, and keep the fish from being considered an endangered species.

“I have no idea what will happen, but I would hope that we’ve demonstrated that we’ve had enough success recently with the population at DCD that we’re meeting our conservation objective to demonstrate we’ve stabilized things,” he said. “Most of our natural populations are doing really well right now. It’s just this Mona Springs population that isn’t doing so well.”