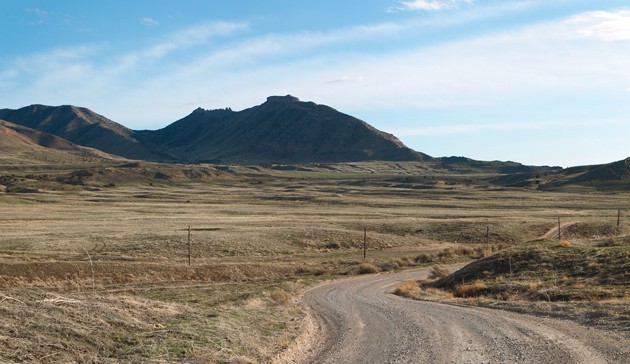 A dirt road winds around the foothills of the Cedar Mountains Wednesday. Lee’s Canyon road will be temporarily closed to protect a raptor nesting area.

Lee’s Canyon Road in Tooele County will be temporarily closed to all motorized vehicles to protect crucial raptor nesting habitat there.

The closure begins this Friday and may continue for the next four months. The closure does not apply to non-motorized recreation.

In 2011, a pair of raptors attempted to nest in Lee’s Canyon, which is located near the Cedar Mountain Wilderness Area, but abandoned the nest due to disturbances, according to the Bureau of Land Management’s Salt Lake Field Office.

“I think the feeling was there was disturbance from [off-highway vehicles] going through there, which is why our biologists felt that’s why they abandoned the nest,” said Bradley Washa, manager of the Salt Lake Field Office.

Last year, in order to prevent disturbances, the BLM placed gates on each side of the canyon and temporarily restricted access. As a result, the nest was successful and the pair fledged one offspring.

“They had one bird fledge off the nest last year, and we’re definitely hoping that will happen again this year,” Washa said.

He added the BLM will not release the location of the nest or the name of the species. One reason is so that the public will not disturb the birds.

“Another reason is that some of our cooperators, like the [Division of Wild Resources] and the [Raptor Inventory Nest Survey] don’t like us to reveal the type of species,” Washa said. “Just in working with those folks, we don’t want to be causing waves.”

The birds have returned to the same site this year, and because of this, the BLM is once again restricting the area. The closure will remain in effect until July 15.

“That date is somewhat flexible,” Washa said. “If the birds are unsuccessful in nesting and abandon the nest, we’d open the area back up early. The birds fledged a little early last year in June, so if the birds leave the nest earlier than July 15, we won’t keep that area closed.”

Locked gates will be installed on both the east and west sides of Lee’s Canyon. The gates will be positioned in locations to allow motorized vehicles to turn around. Signs will also be installed to inform motorists that the road is seasonally closed for wildlife protection, and travel through the canyon is not possible, according to a press release from the BLM.

Anyone who violates the closure could be fined up to $1,000, imprisoned for up to 12 months, or both. The area will remain open to non-motorized recreation such as hiking, mountain biking and horseback riding.

In addition, Hasting’s Pass Road, which is southwest of Lee’s Canyon, will remain open and give the public the same ability to travel across the Cedar Mountains.