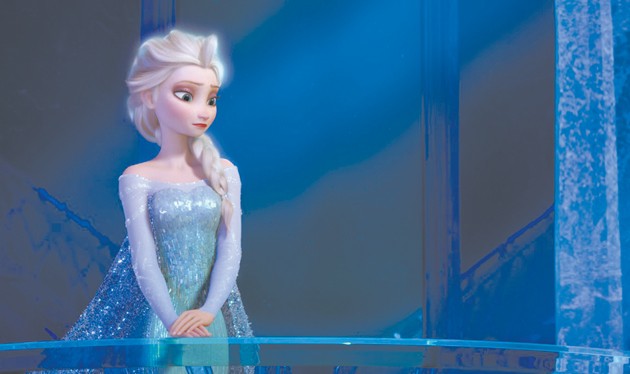 Elsa learns some hard lessons in “Frozen,” which, astonishingly, was Richard’s favorite movie from last year. image courtesy of Disney

“Frozen,” a Disney animated movie that brought back the good feelings I had from classics like “Aladdin,” “The Lion King” and “Mulan,” has thawed my heart with its loving nature. Since I first watched it in theaters on Christmas Eve, and the four times I’ve watched it since then (including twice since I bought it on DVD last week), I’ve asked myself, “How in the world can I love a movie targeted at children this much?”

Even without children of my own, I have the whole “dorky dad” persona down pat, so I know that contributes to my infatuation with “Frozen.” But I’m certainly not the only one who has loved a children’s movie this much “For The First Time In Forever.”

“Frozen” brought in more than $1 billion at the box office worldwide during its time in theaters, passing “Jurassic Park” (!!!!) on the all-time list of top money-makers. It won two Academy Awards, and it got so popular that sing-along screenings of the movie for children were held in theaters everywhere.

So what is it? How is it possible that in a year anchored by Superman and the U.S.S. Enterprise, my favorite movie of 2013 turned out to be a children’s musical?

Ignore the plot holes that most children don’t notice, and “Frozen” is an endearing story all about sisterly love that has a little bit of everything. Adventure? Check. Romance? Check. Ice queens with emotional baggage? Double check.

For those who haven’t seen it yet, the story centers on young Princess Anna and how far she’s willing to go to help her sister, Queen Elsa, who doesn’t have control of her magical ability to create ice and snow. After accidentally covering their kingdom “in deep, deep, deep, deep snow,” Elsa runs away, and it’s all up to Anna to return her home and bring back summer. Along the way, Anna teams up with Kristoff the ice salesman, his trusty reindeer, Sven, and Olaf the talking snowman.

Watching the movie with different people, it’s fun to see the parts that they most enjoy.

I watched it with my roommate and his fiancé after picking up the movie on DVD. This was my roommate’s first time viewing it, and the quote of the night came from him after watching Anna, Kristoff and Sven escape from an angry pack of wolves.

When Anna performed this feat of heroism, my roommate said, “She’s the most capable Disney princess I’ve ever seen.” And it’s so true! Anna’s natural street smarts and refreshing optimism remind me that the best things human beings do are love and maintain hope. Her example of love toward her sister is something I’ve tried to apply toward my brothers in the last few months.

But at its heart, the movie is all about Elsa and her tortured character. Every time I watched the movie, I said out loud at least once, “Poor Elsa.”

More than any character in the movie, she represents all of us, and she’s the reason I love “Frozen” so much. How many of us have tried to do what we feel is the right thing, but it only seems to make things worse? And how many of us let things of the past hold us back? I know I do, and those are the challenges Elsa faces.

Her escape to the North Mountain leads her on a journey of self-discovery, and through the example of her sister, she learns that something as simple as love can conquer anything. I took that journey with Elsa during my viewings of the movie, and those are tough lessons to learn. I’m still learning them.

One thing is certain: Anna and Elsa are the kinds of role models we should aspire to be like. They were both imperfect human beings who overcame their challenges. Elsa overcame her tendency to “Conceal it; don’t feel it. Don’t let it show” by finally learning to “Let It Go.” And Anna … well … even though “Love Is An Open Door,” she learned to make people knock first.

Anna and Elsa both learned lessons that I needed to learn, and for that, “Frozen” will always mean something special to me. Thank you, Disney, for creating these two sisters. I hope they last as icons for years to come.