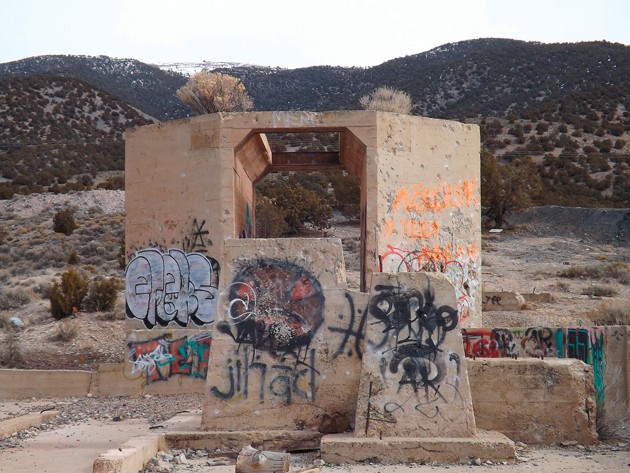 West Dip ruins that have been vandalized by spray paint.

I have driven, walked and biked over countless miles of Tooele County and there are many wonderful and beautiful places to explore and enjoy.

There are almost an equal number of places that are no longer wonderful or beautiful, and it is a sad thing to visit them. They were not burned by fire, or destroyed in a flood or landslide. Instead, they have been polluted and degraded by disrespectful and criminal human behavior.

By illegal littering and dumping, illegal recreational vehicle travel etc., many people in this county and state are destroying the great outdoor areas and wilderness that they set out to enjoy. Some of the things that greatly anger me are the 12-packs of empty beer bottles that some fool leaves either scattered or broken into pieces on the ground.

There are also hundreds of spent 12-gauge shotgun shell casings and broken bits of clay pigeons, and piles of yard refuse, rubble or even garbage sneakily dumped in a field because someone was too lazy or cheap to haul their trash to the landfill.

And there’s more. Tin cans, plastic water bottles, beer cans, spent casings etc., litter many sites that might otherwise be enjoyable. Old lumber, plastic bags, tires, plywood, sheetrock, concrete and other refuse is dumped without a care. Nothing is more disappointing than scaling a high peak and finding some idiot’s garbage way out in the middle of nowhere.

Another area which is a source for extreme disappointment is ATV riders who cannot respect private property, established trails, public lands, National Forests and Wilderness Areas. With so many different areas to ride on public lands especially, it is beyond me why someone would want to pioneer new trails through pristine areas where the resulting erosion will take the environment years, even decades to recover.

Lastly vandalism, theft of property and trespassing are three ugly things that ruin natural, cultural and historical resources. Nature has a way of eventually healing itself, but once a cultural or historical resource has been destroyed, it is lost forever.

Examples of these would be an old building on the grounds of Wendover Airport that was once part of the 509th Bomb Group training grounds’ infrastructure. Old mining buildings, tunnels, mills and equipment, too. And old log cabins, fences, stone monuments, cemeteries, culverts, railway grades, and historical plaques are just some of the things irresponsible persons like to deface with spray paint or worse, actually break them down into pieces.

It may seem like a harmless deed to carve initials into an aspen tree, but this type of activity can actually end up killing the tree. Medallions and other metal plaques are chiseled off and stolen from historic monuments, and some concrete markers put in by the Civilian Conservation Corps in the 1930s have been broken off at the base.

No sooner does the Bureau of Land Management or U.S. Forest Service erect an interpretive sign or directional marker than some fool blows a hole in it with a high-powered rifle or shotgun. I often wonder to myself about what would possess a person to do these destructive and unlawful things.

What is not a mystery to me is why many private property owners want to restrict individuals from coming onto their land. With all the destruction that is done in many areas, it is a no brainer to limit access in order to try and minimize the damage that fools do through their destructive and negligent behavior. A case in point is the historic area that was at one time known as West Mercer or West Dip.

At one time this was a thriving mining district and there were many buildings, a large mill, a store and school house in West Dip. The area was active from 1895 through 1917 when the main works were destroyed by a fire and never rebuilt. For over 100 years numerous rock foundations and several interesting concrete mining building remained, but vandals and generally nasty people have taken a toll. Filthy garbage litters the ground. Spent shell casings from all kinds of weapons lie strewn about everywhere, and the pocked concrete of some of the ruins show evidence of being the target of these weapons.

Some of the ruins are nearly completely covered in spray paint and graffiti. Anything left standing looks as though someone took it as a personal challenge to knock them down. The usual piles of dumped junk and household garbage are here, as well as cigarette butts and beer bottles that are broken and scattered, creating a hazard for man and beast alike.

How much better would our environment be if people respected some simple basic rules like picking up after themselves? I have nothing against shooting, in fact I love to go shooting, but for heaven’s sake, pick up your spent brass, plastic casings and target refuse.

Similarly, if you have a beer under the stars or go camping which are both completely enjoyable things to do — be responsible and respectful  — pick up your trash!

Simple rules must be followed, like not damaging property that does not belong to you, or property that belongs to the public such as road signs, monuments etc. Also, staying on established roads and trails in order to protect plants and wildlife and prevent erosion.

Whenever we go camping or hiking, we have a rule: Always leave that place or trail better than we found it. Often times this means cleaning up some trash that someone else left. Lastly, if property is marked as private, or if there is any question in your mind at all, stay out and respect that property owner’s rights.

I believe that if we all work together and just take even a second to consider our actions and their impact on the environment, we can make a difference and keep our public and county places beautiful and in good environmental health.

Also, if we don’t abuse the right to access certain areas, that access will not be denied. As winter turns to spring and spring gives way to summer, I hope everyone in the Tooele County will join me and be better stewards of the incredible wild mountain and high desert places that we have here.