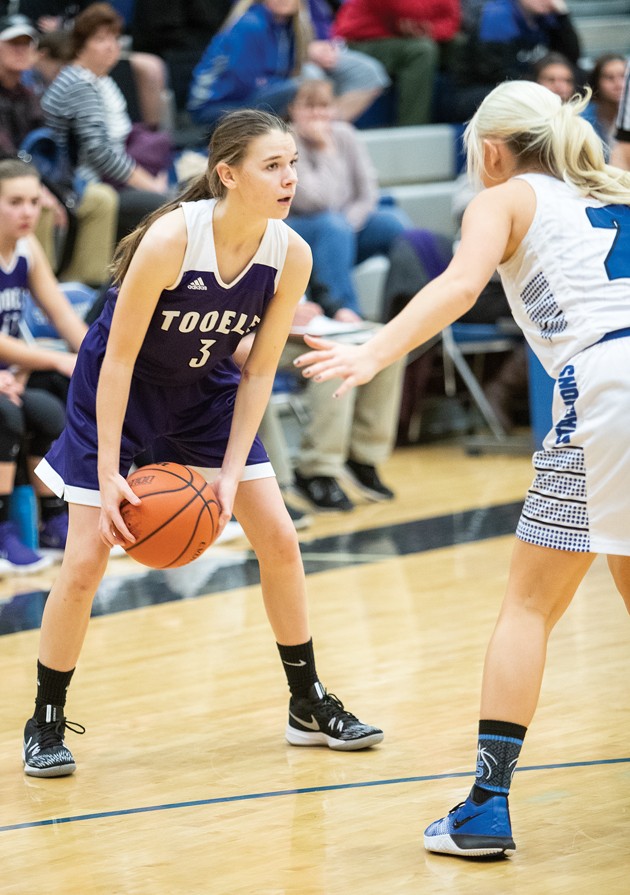 Tooele’s Aysha Lewis (3) looks for a way around Stansbury’s Kalee Philips during a February girls basketball game at Stansbury High School. Lewis was named the recipient of this year’s Jackie White-Kimber Memorial Award, given annually to the Tooele player who best exemplifies character and leadership and is also a key part of the team.

In high school basketball, top postseason awards are normally reserved for upperclassmen — as are most of the top leadership and scoring roles on the team.

Tooele sophomore Aysha Lewis was an exception this past season, not only earning a spot on the Buffaloes’ varsity roster, but flourishing as a top scoring threat and a respected voice in the locker room. After helping the Buffs reach the Class 4A state tournament, she was named the 2019 recipient of the prestigious Jackie White-Kimber Memorial Award, which is given each year to the Tooele girls basketball player who best exemplifies leadership skills and character while playing an integral role on the team.

Lewis is just the third sophomore ever to win the award, which dates back to the 1988-89 season. Karie Johnson Frederickson (1990-91) and Michelle Cooper (1994-95) are the others, with both also winning the award as seniors. Lewis has the opportunity to become the award’s first three-time winner.

“Her presence on the floor is huge,” Tooele girls basketball coach Randy Goss said. “Even though she’s just a sophomore, she plays with a lot of confidence and she’s willing to take on the leadership out there on the floor. She’s positive and she’s got a really competitive spirit. She doesn’t back down.”

Lewis was Tooele’s leading scorer, averaging 7.3 points per game with a team-high 15 3-pointers made in 22 games. She stepped up in Region 11 play, scoring a season-high 17 points against Park City and adding 15 against Juan Diego, and she was the Buffs’ top scorer in their state tournament game against Green Canyon with 11 points. On a team that had six seniors on its roster, it took her some time to find her voice as a sophomore, but when she did, her leadership was valuable for a team that surged to third place in the Region 11 standings.

Goss said Lewis is only beginning to reach her potential, and he is excited to see what the next two seasons hold in store for her.

“For being young, she feels like she can play with them all and I think she proves it,” Goss said. “I think she’ll just keep getting better as she gets older.”

The award is named for Jackie White-Kimber, a former Tooele High girls basketball player who died in 1988 after battling cancer. Former THS coach Susan Rydalch selects the winner of the award each year. Lewis received a gold ring designed by 1989-90 winner Linda Matekel Kimball to commemorate her achievement. Second-time winners receive a gold necklace, and Rydalch said a bracelet may become the prize for an unprecedented third win.