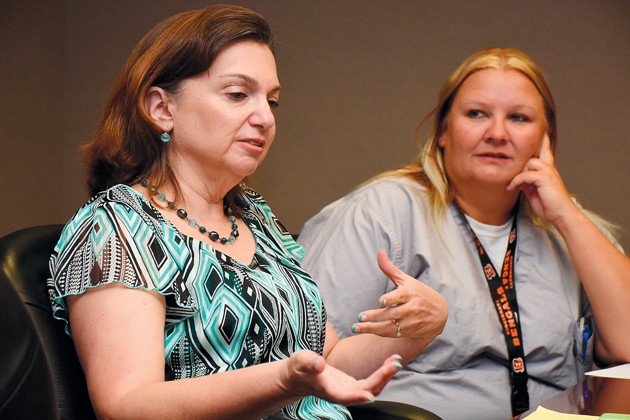 As the director of marketing, Becky Trigg is the face and voice of Mountain West Medical Center.

Since last fall, she has also become accustomed to being a regular patient.

Trigg was diagnosed with myasthenia gravis last December, a rare autoimmune disorder after symptoms she had attributed to other conditions worsened and eventually hospitalized her. Myasthenia gravis prevents nerves from communicating effectively with muscles in arms, legs, face and the respiratory system.

Now that she has begun to adjust to her new normal of life with a chronic disease, Trigg said she hopes to reach out to the community to raise awareness of the rare disorder.

Looking back, Trigg said, it is clear to her now that signs of her MG surfaced at least three years ago when she began to experience episodes of blurry vision that she attributed to her “aging eyes.” A year and a half later, she said, people began to comment on the way her right eye had begun to droop.

What Trigg said she didn’t know, at the time, is that eye trouble is one of the first signs of MG. She soon began to develop other common symptoms as well — a persistent cough she attributed to asthma, but that didn’t respond to medication, and muscle soreness and fatigue she attributed to being out of shape.

Her fatigue progressed to the point that everyday tasks, such as doing laundry, became so tiresome she felt she had to lie down and rest. Before long, she said, she began to suspect she might have multiple sclerosis, causing her to seek care from a neurologist.

An MRI ruled out MS, and Trigg’s neurologist soon came to her with the suspicion that she had MG instead.

Myasthenia gravis is considered rare — somewhere between 3-30 per one million people will develop the disease in their lifetime — but is most likely to develop in women under age 40 and men over age 60, according to Myasthenia Gravis of Utah. Various factors may lead to the development of the disease, which may develop gradually or present itself suddenly.

In severe cases, patients with MG experience myasthenic crises, which occur when the respiratory system becomes fatigued and the patient feels too weak to breath. Those who experience these crises are often hospitalized and placed on a ventilator until the episode passes.

After a series of trial medications, Trigg said she has found that IVIG — a therapeutic approach where the patient is given healthy antibodies from thousands of plasma donors via an infusion — has relieved the worst of her symptoms and allowed her to function normally on a day to day basis. Intense physical activity, however, remains out of reach.

She said she is one of the lucky ones whose insurance will cover the treatment — IVIG costs more than $10,000 per treatment, and Trigg said she can only go about two weeks between infusions. Many others, she said, struggle to cope with the limited treatment they can afford.

Trigg said she was also one of the lucky few who found social support relatively quickly. After searching online, she eventually found a local group that is part of a formal MG support group for the state.

She said she is aware of 10 other Tooele County residents with MG, and hearing stories from people like Elizabeth Wicker, who has lived with MG for 30 years, or from Kelly Odermott, who is raising three children while seeking proper treatment for her MG, has given her hope.

Trigg said she felt a lot of depression and despair after being diagnosed with a disease for which there is no known cure.

“I was really wondering what direction my life was going to go,” she said.

Initially, Trigg said, it was hard for her to share with others an experience she didn’t quite understand herself. But now, Trigg said she has found a new sense of purpose after her diagnosis.

Because she believes everything happens for a reason, Trigg said she hopes to use her diagnosis, her experience as a regular patient at the hospital, and her position as an employee there to raise awareness of MG and to reach out more to patients.

“It gives you an empathy, a compassion for people,” she said. “Everyone is going through things that we have no clue about, and we need to give them encouragement.”