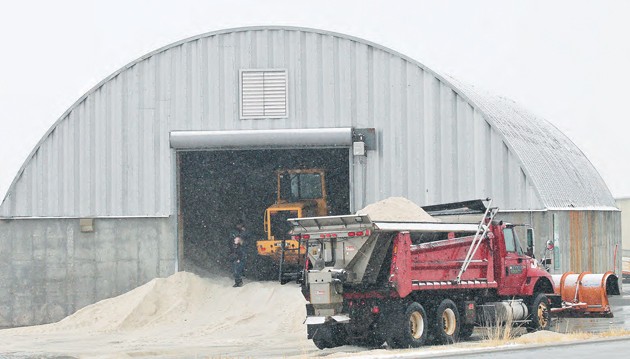 A kid walks on a large pile of salt at the Tooele City and County salt stockpile Thursday morning. Snowplows have been largely idle during a mild winter thus far.

Even with winter resuming normal service this morning, a relatively mild winter overall has made life easy for local road maintenance crews.

Salt supplies remain plentiful and budgets for overtime for snowplow drivers are untapped, thanks to fewer snowstorms and other weather conditions that would require those services and supplies.

“The salt storage facilities are all full,” said Rod Thompson, director of the Tooele County Road Department. “We would have expected to have to order more salt by now.”

The county shares the four salt storage facilities with other agencies such as Tooele City, Grantsville City or the Utah Department of Transportation.

Thompson said in addition to the county’s share of the supplies, the county was given some road salt by a company discontinuing their road salt production and trying to clear out their stock — an ironic windfall given the demand so far this winter.

Although snowplows have not been out in force as frequently as they were last year, Thompson said workers have stayed busy. Flood control projects started last spring have seen progress and desert roads normally covered in snow and ice have been bare and dry enough for repair and improvement.

The department’s budget includes amounts for expected overtime for snowplow operators. Thompson said that pot is still healthy, though noted that to his knowledge it was not exceeded last year, either. Not running snowplows as much also means fewer costs for fuel and maintenance, he said.

“If you’re not using them to plow the road, they’re not breaking down as much,” he said.

Adan Carillo, public information officer for UDOT, said the budget for his agency is also significantly under the amount spent at the same time last year.

To date, UDOT has spent $8.7 million on snow removal statewide — only a little more than half the $15.2 million spent by this time in 2011. There is currently $14 million left in UDOT’s snow removal budget for this winter.

If snow removal activities do not require the whole of the budget during any winter, he said, the excess is used towards other maintenance projects, such as restriping roads or fixing signs. The amount left over from snow removal, though, he said, is typically fairly small.

“The amount of money that rolls over into the general maintenance fund is really, really minimum,” he said. “It’s not like millions roll into that.”

Still, he said, experience has taught him that warm weather is still quite a ways off, especially for roads higher in the mountains.

“Last year we had snow storms clear into springtime, so we are anticipating more snowfall for sure,” he said. “We have some higher elevation roads where it snows more up there than we do down here, and it takes a lot of money to clear those.”